Assuring the Integrity of Mechanical Systems 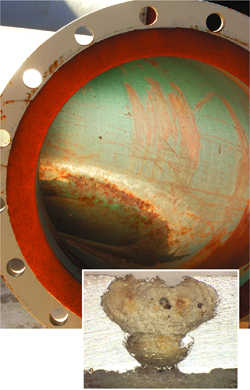 Localized corrosion in process piping, such as in the stainless steel pipe shown here, can lead to through-wall penetration.
Corrosion, which physically degrades materials and reduces their functionality, occurs almost everywhere and can affect almost anything around us. It can endanger critical structures including pipelines, aircraft, automobiles, bridges, buildings, biomedical implants, and simple things like appliances and tableware.

Corrosion can also have long-term adverse effects on the environment that are not considered in the above calculations. The urgency to mitigate corrosion has increased as systems are aging beyond their original design life and replacing them has become either too costly or unacceptable to society. For example, replacement of aging nuclear reactors is nearly impossible today, although they supply a significant part of our electric power. 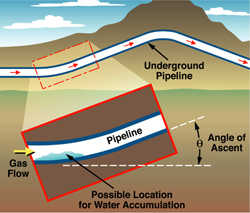 This schematic shows water accumulation at locations of pipeline inclination where inspections and determination of possible corrosion are necessary.
Corrosion is not always systematically considered at the design and construction stages of many engineering structures. Unanticipated changes in the environment in which the structure operates can also result in unexpected corrosion. Structures are prone to various corrosion-related failures, and maintenance operations often are implemented to mitigate the effects of corrosion. A key question, however, is when should such maintenance operations be performed? If the maintenance or service function is performed before it is necessary, then the overall costs associated with keeping the system operational are excessive. If, however, service is performed too late, then a performance or safety penalty may result. Each of these conditions may arise because of uncertainties in the actual condition of the structure.

This schematic shows water accumulation at locations of pipeline inclination where inspections and determination of possible corrosion are necessary.

Predicting and assuring system integrity can entail the use of computer models as well as sensors and monitoring tools. Computational methods tend to be limited by uncertainties in starting and operating conditions. These methods require accurate information to make high-fidelity predictions. Further, many physics-based models require calibration and correction of model parameters. Sensors and other monitoring tools can provide information regarding past and present exposure conditions but, in general, they cannot predict remaining life. In research efforts under way at Southwest Research Institute (SwRI), scientists are coupling computational methods with sensor systems to provide reliable life-prediction assessments.

Localized corrosion, in the form of pitting and crevice corrosion, limits the life of many systems. Once initiated, pitting can propagate rapidly leading to through-wall penetration. Pits also can be the initiation sites for cracking which, in turn, can also result in catastrophic failure. Therefore, it is necessary to prevent initiation of localized corrosion through proper design, constant monitoring and timely remedial action. SwRI teamed with OLI Systems Inc. for a project funded by the National Institute of Standards and Technology Advanced Technology Program to develop a computational model capable of predicting the initiation and propagation rate of localized corrosion. The project goal was to enable such a model to interface with standard process simulation software used by chemical engineers. The model was incorporated into commercial computer software supplied by OLI Systems Inc.

In addition, SwRI scientists developed a new, complementary localized corrosion monitoring sensor, the Multielectrode Array Sensor (MAS). MAS is based on fundamental chemical and electrochemical processes that occur during localized corrosion. It determines if corrosion is likely to occur when engineering materials are exposed to a wide range of environmental conditions. MAS comprises an array of electrodes made from the same material as the structure being monitored. The system, which has been verified using a wide range of laboratory and field experimental data, can determine whether localized corrosion is taking place and estimates the rate of corrosion. When coupled, the model and sensor assist corrosion engineers in selecting appropriate materials for different environments, determining if changes in environmental conditions (such as temperature or acidity) will lead to localized corrosion, verifying if proposed mitigation methods (such as inhibitors) will be effective and providing an early warning of impending failure.

Recently, this coupled approach was used to help a commercial company determine which materials would be best suited for possible piping and other component upgrades at a chemical plant. Using the model, it was predicted that a highly corrosion-resistant alloy (Alloy C-276, a nickel-based alloy that contains 15.5 percent chromium, 16 percent molybdenum, 5.5 percent iron, 3.75 percent tungsten and 2.5 percent cobalt) would be suitable for such an application. Comparing the computational model predictions to the localized corrosion rate from the sensor system confirmed that Alloy C-276 would perform considerably better than the other materials under consideration. Without the model, an extensive test program would have been required to determine the best material for this application. Furthermore, confidence in the model predictions and verification as to why previously chosen materials failed would not have been possible without the sensor system.

Under funding from the U.S. Department of Energy Industries of the Future Program, SwRI and OLI Systems Inc. are extending this modeling approach to include fabricated structures. Welding and other thermomechanical processes affect the corrosion resistance of materials by altering their microchemistry. The model aims to incorporate the microchemical changes resulting from fabrication processes in predicting the material's localized corrosion performance.

Researchers compared predicted model results to data collected by a sensor system that measured the pitting corrosion rate for three different materials proposed for use in a chemical process plant. 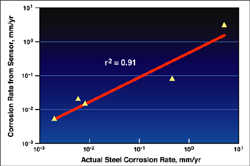 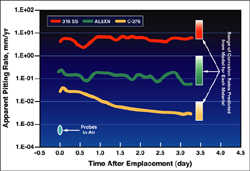 Researchers compared predicted model results to data collected by a sensor system that measured the pitting corrosion rate for three different materials proposed for use in a chemical process plant.

According to the U.S. Department of Transportation Office of Pipeline Safety, internal corrosion caused approximately 15 percent of all reportable incidents affecting gas transmission pipelines over the past several years, leading to an average cost of $3 million annually in property damage as well as several fatalities. A significant portion of the pipeline system cannot be inspected through traditional methods. To help prioritize locations where water accumulation may take place, SwRI researchers collaborated with a number of other companies to develop and validate the internal corrosion direct assessment (ICDA) method through funding from the Pipeline Research Council International and the Department of Transportation.

In this approach, a fluid dynamics model is used to predict the critical incline angles that could lead to water accumulation by comparing the force by which the gas flow pushes the water along the pipeline with the force of gravity. Thus, for a given gas velocity and quantity of water, there exists a critical angle above which the force from gas flow is insufficient to continue moving the water along the pipeline, causing the water to puddle. This concept has been incorporated in a probabilistic framework to consider the uncertainties in pipeline elevation profiles and other parameters.

Although the ICDA approach is proving extremely valuable to the pipeline industry, it does not provide direct information about the aggressiveness of any water that may be present and it cannot quantify the corrosion risk. For example, it is possible that other liquids besides water also may be present. In addition, just because water is present does not necessarily mean that the pipe is experiencing rapid corrosion. Thus, excavation and inspection of pipes are still required. This disrupts pipeline operations and can be particularly difficult in highly congested areas where permits are difficult to obtain.

In conjunction with Aginova Inc., SwRI has recently undertaken a project, funded by the Department of Energy National Energy Technology Laboratory, to develop independent and complementary technology to ICDA to enable remote interrogation of the internal corrosion of pipelines through a distributed wireless sensor network inside the pipe. The network uses miniaturized sensor packages, called motes, which are introduced into the gas stream.

Motes are small, battery-powered, processor-based devices that form the backbone of a distributed two-way, wireless radio network. These devices, developed originally at the University of California-Berkeley, are similar to radio-frequency identification tags. However, because they have a microprocessor and an operating system, they can be programmed to automatically form a wireless mesh network that enables data hopping from one mote to the next. This wireless backbone is coupled to a corrosion sensor that determines the aggressiveness of any liquids found and estimates the rate of corrosion that the pipe is experiencing at that location. These sensors will be encapsulated in a polymeric sheath with surface properties that can be manipulated to range from hydrophilic to hydrophobic. The sensors can thus flow in the gas stream and also move to the locations of water accumulation. Preliminary flow modeling has demonstrated the feasibility of such a concept.

Tests using different pipeline loops have demonstrated that communication is feasible among motes within the pipeline. Furthermore, signal losses within the pipeline at distances greater than 300 feet were found to be less than the losses observed at five feet in air, indicating the inside surface of the pipe acts as a waveguide. This process is being expanded to determine the maximum signal transmission range. Meanwhile, several corrosion sensors have been examined, with excellent agreement between the SwRI-developed MAS probe and pipeline steel corrosion rates. The development of this distributed wireless sensor network provides a powerful complement to the model in that, unless the sensor network detects rapid corrosion, pipeline excavation would no longer always be necessary.

As computational capabilities have improved, the ability to model the corrosion mechanism and predict the integrity of complex structures and systems has grown. These models, however, still require information regarding initial condition, expected operational conditions, calibration and, most importantly, validation of the predictions. Sensors and monitoring systems can provide such information, but they cannot provide any indication of future performance. By coupling these two technologies, a better understanding of what is occurring can be realized. Subsequent remedial actions can be devised to counteract the effects of corrosion, thereby helping to assure the integrity of corroding systems.

Dr. Narasi Sridhar, left, is a program director in the Mechanical and Materials Engineering Division. Sridhar is a recognized expert on corrosion prediction, mitigation and control. He has conducted numerous corrosion studies for a variety of applications including nuclear waste storage and disposal, natural gas pipeline, oil and gas production, marine and chemical industries as well as the U.S. military. He has also developed nickel-base, cobalt-base, copper-base and ion-base alloys and holds several U.S. patents in materials development. Former SwRI employee Dr. C. Sean Brossia, right, was manager of SwRI's Environmental Performance of Materials Section in the same division. Brossia is experienced in the corrosion behavior of iron, nickel, titanium and aluminum-based alloys in aqueous and non-aqueous systems, as well as corrosion sensing and monitoring and modeling of corrosion processes.