Fatigue is a significant design consideration in deep-water floating production systems. The most critical components of these systems from a safety and reliability perspective are production and export steel catenary risers (SCRs), top-tension risers (TTRs), as well as flowlines, since they transport all production fluids. These components can also be subjected to sour service conditions, due either to the nature of the crude production or to seawater flooding of the reservoir to enhance production yield.

Extensive laboratory testing has shown that sour brine environments can reduce fatigue life by 10× to 50× compared to fatigue lives measured in laboratory air. Thus, in order to ensure safe, reliable, and environmentally friendly deepwater development, the effect of these sour service conditions must be properly accounted for in riser and flowline design. However, to ensure that the full environmental effect is captured, tests need to be conducted at cyclic loading frequency representative of those experienced in the structure (typically 0.1 Hz or less), which makes corrosion-fatigue testing very time consuming and costly. Consequently, there has been a need for predictive models that can reduce the dependence on extensive long-term testing, while at the same time enable existing data to be interpolated and/or extrapolated over a broad domain of relevant mechanical, environmental, and material variables.

In response to this need, a Joint Industry Project (JIP) was organized by SwRI in 2010 under support of six energy companies and component suppliers. Phase 1 of the JIP, which was completed in 2014, developed and validated an analytical model for corrosion fatigue crack growth (CFCG) of offshore structural steels, which can predict CFCG rates in sour brine environments over a wide range of mechanical, environmental, and material variables. This model was formulated based on the assumption that CFCG rates for offshore structural steels exposed to sour brine environments are dominated by hydrogen embrittlement.

The detailed modeling approach was as follows: 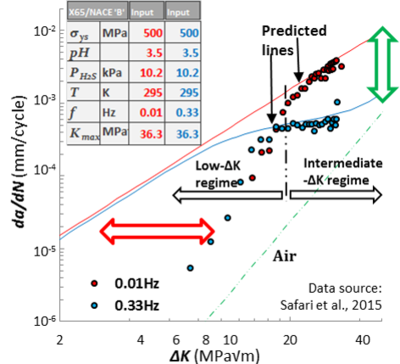 The resulting analytical model, in turn, has been used as the basis for developing an engineering spreadsheet tool. An example of predictions from the spreadsheet tool in comparison with experimental CFCG rate data is provided in the figure. The model inputs displayed in the table extracted from the spreadsheet tool include material variables (steel yield strength, σys), environmental variables (pH, H2S partial pressure, temperature), and mechanical variables (load-cycle frequency, f, and maximum stress-intensity factor, Kmax). While the comparison between model predictions (solid lines) and experimental data (symbols) is favorable at intermediate stress-intensity factor ranges (ΔK), the CFCG rates are overestimated at low ΔK. This is because CFCG rates in this regime are hypothesized to be dominated by changes in the true mechanical driving force, which has not yet been included in the model-based spreadsheet tool.

To address this limitation of the Phase 1 model, Phase 2 of the JIP was initiated in 2015 to extend the model to predict CFCG rates at low ΔK. As schematically shown in the figure, the model/spreadsheet tool from Phase 1 is capable of predicting effects of changing environmental variables on CFCG rates (green arrow), which shift da/dN(ΔK) in the vertical direction. However, the figure also illustrates the present limitation of the current model – specifically, the model overestimates da/dN at low ΔK, so that alterations in the mechanical driving force are necessary to translate da/dN(ΔK) in the horizontal direction (red arrow) in order to obtain more realistic (i.e., less conservative) predictions in the low-ΔK regime. Therefore, the focus in Phase 2 is to identify and characterize the fundamental mechanisms that can alter the mechanical driving force in order to correct this over-conservatism in the Phase 1 model.

Critical experiments combined with modeling are underway in Phase 2 of the JIP with four members from the energy sector to improve the predictive capability of the model in the low-ΔK regime.