Balloon in a Box

The Tactical Aerobotic Launch System (TALS) enables a lighter-than-air vehicle to be launched autonomously from a portable, self-contained package, in remote and unimproved environments.

Ever since the days of observation balloons, rigid airships and Navy blimps, inﬂating and launching most lighter-than-air (LTA) systems have required a large open space, spe-cialized equipment and a well-trained launch crew. Even for non-rigid airships and balloons, unpacking and laying out the hull for inﬂation typically must be done inside a very large hangar, or out-doors under very low wind conditions, because the hulls can be several hundred feet in length and are made from very lightweight material.

Throughout the lengthy inﬂation and launch process, the hull is at risk of damage from wind gusts or contact with obstacles. Usually, large handling equipment and an experienced launch team are also needed to get the LTA system aloft without damage.

Given a choice, most military operators would prefer to deploy their LTA systems quickly from remote, unimproved sites, using minimum personnel with limited training. For this reason, a team of engineers from Southwest Research Institute (SwRI) undertook an internally funded research project that resulted in the Tactical Aerobotic Launch System (TALS) concept by which LTA systems can be launched from a self-contained, easily portable package that provides inﬂation, stabilization, protection and release. TALS can be operated by a small team, or by remote control or autonomous launch on command. The concept is adaptable to balloons, airships and tethered aerostats. 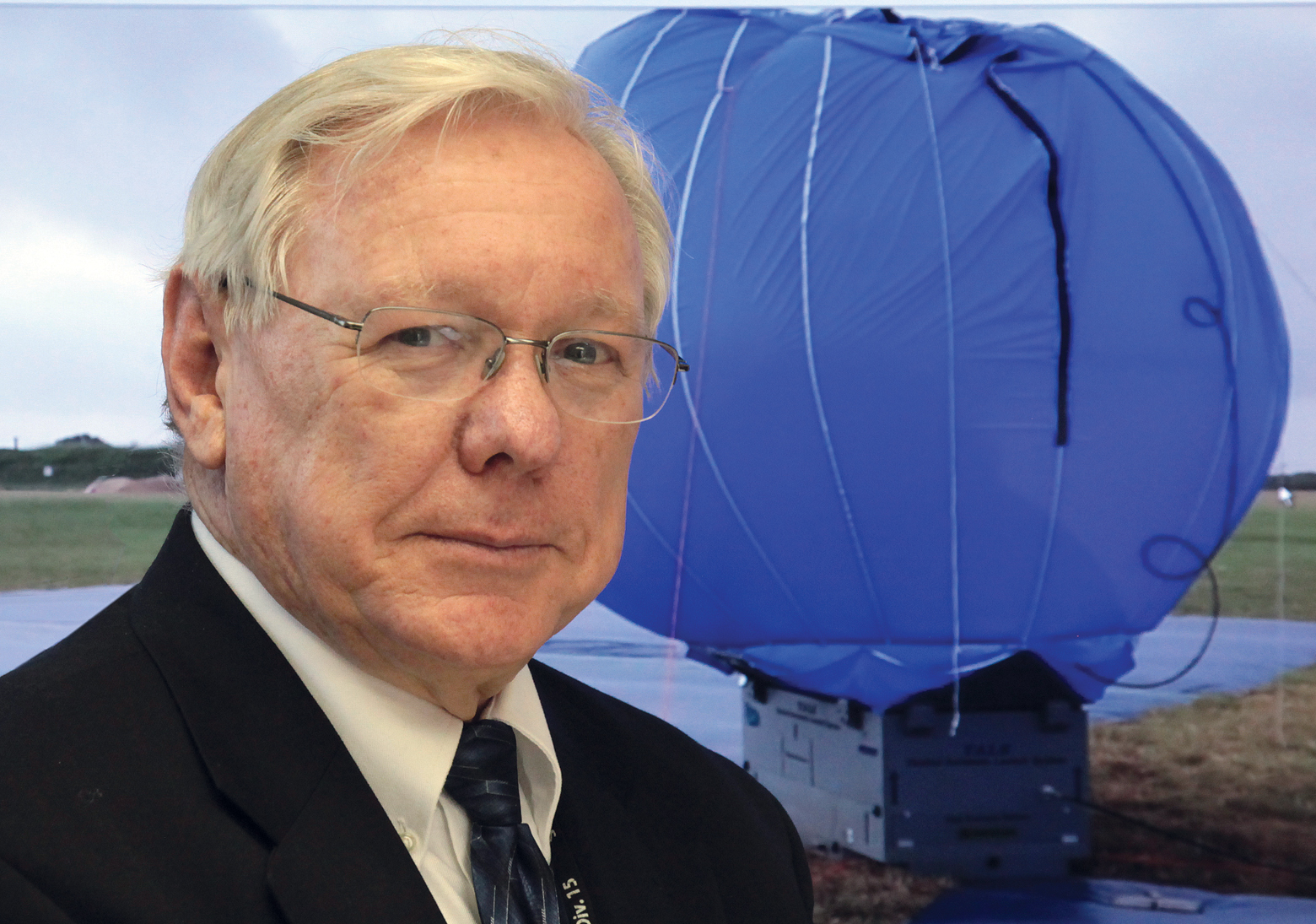 William Perry is an Institute Engineer in the Space Systems Directorate of the Space Science and Engineering Division. He manages the Institute’s lighter-than-air section, which designs and tests advanced lighter-than-air vehicles for military and science applications.

Tactical military applications for LTA vehicles require deployment under widely varied conditions, from sites that may be unimproved, and with limited space. Possible launch sites can include a jungle clearing, lake or sea surface, beach, a helipad on a naval vessel or a mobile ground vehicle. The self-contained TALS can be shipped using available military vehicles and stored, completely integrated and ready to go for rapid deployment.

Deployed LTA systems provide a plat-form for a variety of electronic systems used for communication relay, real-time surveillance, communications intercept and other functions.

The TALS concept uses a single shipping container in which the LTA system is packed along with a supply of lifting gas (helium or hydrogen). The inﬂation subsystem includes batteries for power and digital electronics that control the inﬂation and launch processes. The container can be transported by truck or helicopter to the launch site, where a small team secures the container to the ground, vehicle or other heavy structure. Once the container is secured, the LTA system can be launched immediately or left for autonomous launch at a later time using a timer or telecommand. After launch, the container can be recovered and refurbished for reuse.

At the planned launch time, the integrated control system determines whether the wind velocity and direction are acceptable. If so, the inﬂation and launch process begins with the top of the container opening to expose the protective tent that covers the folded LTA system. Guy lines with automated extension and tensioning, which are attached to the tent, provide stability during the inﬂation process. The inﬂation rate and total gas quantity are automatically controlled. The hull rises from the container as it is inﬂated inside the protective tent, and when a predetermined amount of lifting gas has been injected, gas ﬂow ceases and the top of the tent opens, allowing the LTA vehicle to escape and ascend. 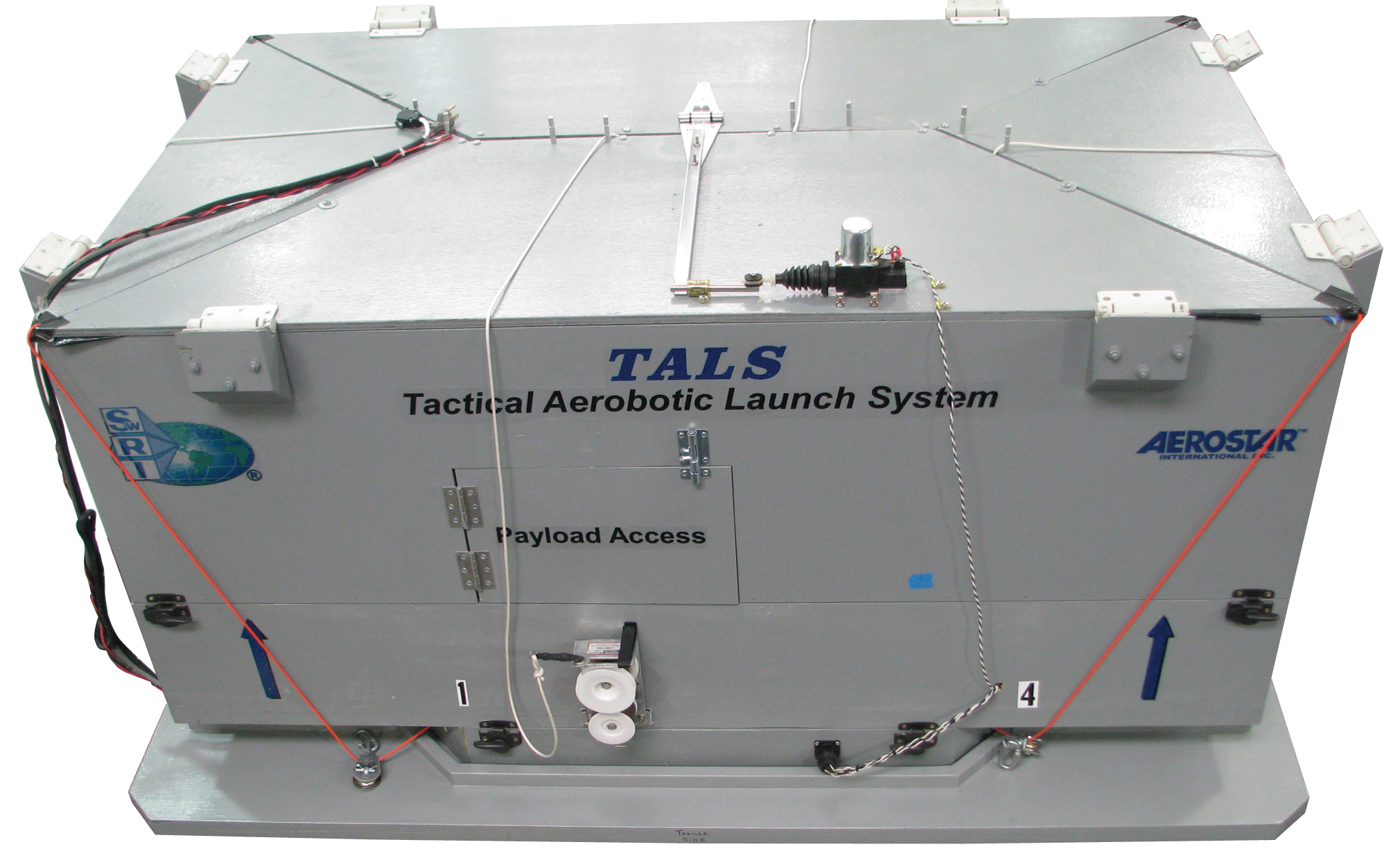 The TALS shipping container is packed with lifting gas, batteries and launch-control electronics as well as the vehicle itself.

SwRI has a long history of designing and operating autonomous LTA vehicles, such as HiSentinel, a non-rigid, electric-powered, autonomous airship that was partially inﬂated with helium on the ground and launched like a balloon. It assumed its aerodynamic shape as the helium expanded with increasing altitude and decreasing atmospheric pressure. By the time HiSentinel reached its operating altitude around 65,000 feet, the expanded helium had pressurized the gas envelope enough to provide rigidity and structural strength. TALS builds on that experience by addressing additional, non-ﬂight issues such as storage, transport, inﬂation and launch logistics.

After ﬁrst successfully completing the feasibility study and a full-scale TALS preliminary design, funding was provided for the design, construction and testing of a functional, one-third scale TALS to demonstrate rapid automated launch of large LTA systems from remote, unimproved sites using only a small team, in windier conditions than conventional launch methods allow.

In Phase I, SwRI engineers established the performance requirements for a tactical launch system, sized for a HiSentinel 80 airship, which is 200 feet long and weighs about 1,100 pounds. The SwRI team determined the optimal size, shape and mass of the launch container and completed a preliminary design that included packing, power, control, communications, tent and lifting gas systems for launching a full-scale airship. Total weight of the full-scale TALS container and its contents was less than 6,000 pounds. At 9 feet tall, 8 feet wide and 14.6 feet long, the container would be easily transportable by aircraft, helicopter, truck or ship. Based on the results of the feasibility study, the team next designed a maller, one-third scale TALS to serve as a feasibility demonstrator. 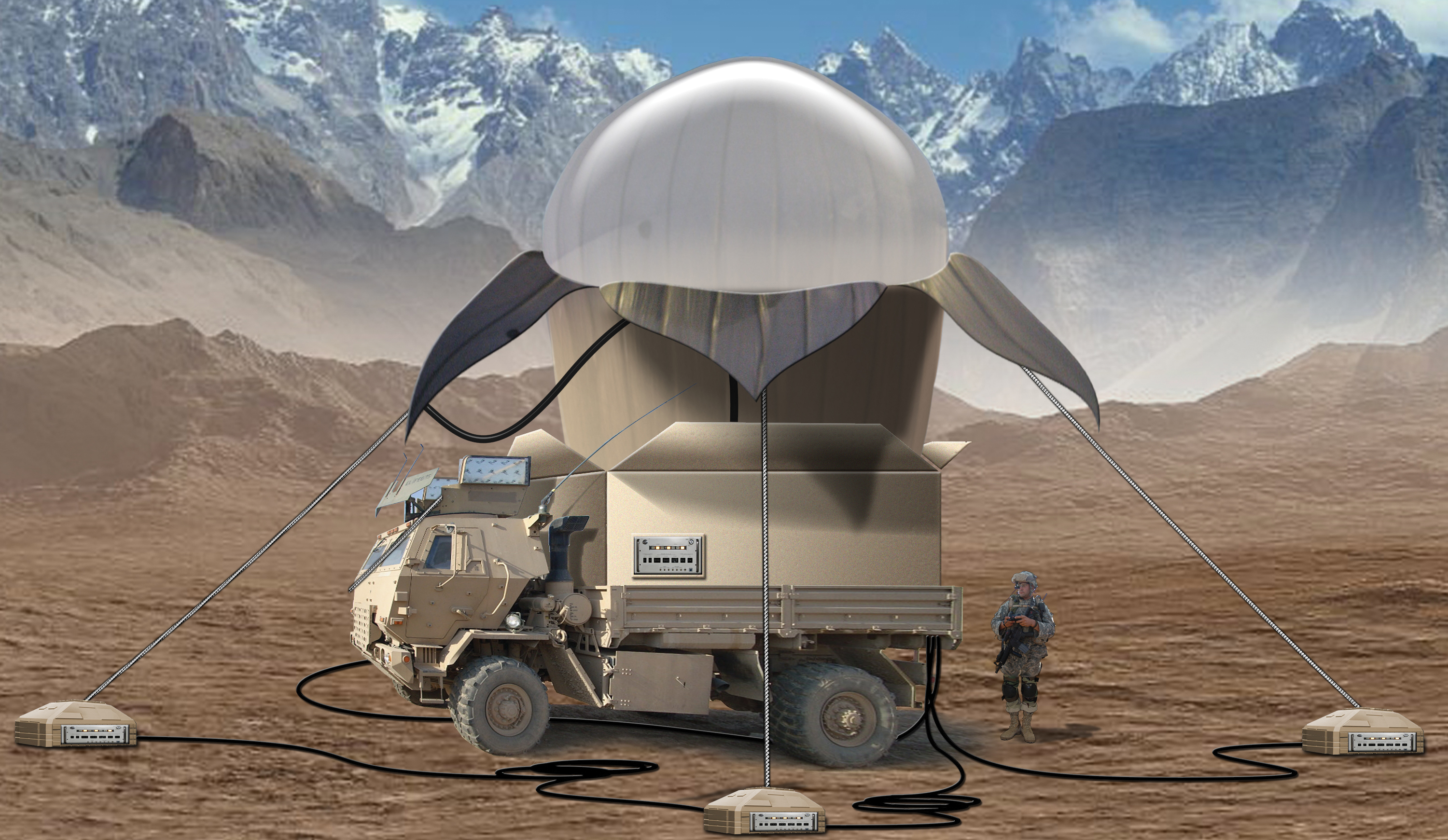 In this artist’s rendition, a truck-transported container serves as the inflation and launch platform for a TALS application in an austere environment.

In preparation for ﬁeld testing, the SwRI team evaluated each subsystem independently before integration. They next performed extensive functional testing of the completed demonstrator in the laboratory under controlled conditions. The team performed two ﬁeld tests under light wind conditions, resulting in a list of changes and reﬁnements that were needed before the system would be ready for demonstration.

The TALS team spent another year modifying, reﬁning and testing the TALS hardware and software in preparation for an on-site demonstration. Laboratory tests under ideal conditions, along with ﬁeld tests over a range of wind conditions, resulted in many changes that improved reliability and performance. The laboratory tests included more than 20 inﬂation and release cycles using air for safety. These tests veriﬁed the inﬂation and release sequence but could not test the loads produced by the lift of the helium gas and effects of wind and moisture. Only ﬁeld testing using helium for lift and under real weather conditions could  verify the TALS performance.

The team completed eight fully automated ﬁeld launches under a range of wind and moisture conditions. Pre-launch setup times averaged ﬁve minutes once the launch container was placed in position. Inﬂating and launching the test airship took fewer than 10 minutes. Based on these results, a full-scale airship would take about 20 minutes to set up, inﬂate and launch, making the entire process well within the target of less than one-half hour.

The TALS stabilization line system demonstrated that it could control the tent and keep it vertical during the inﬂation process. No sailing or ﬂagging of the tent occurred, even with winds up to 12 knots (14 mph). The system has a 20-knot (23 mph) design limit, which the team hopes to verify during future ﬁeld tests. Meanwhile, testing revealed that the launch process and all of the TALS elements were working well. 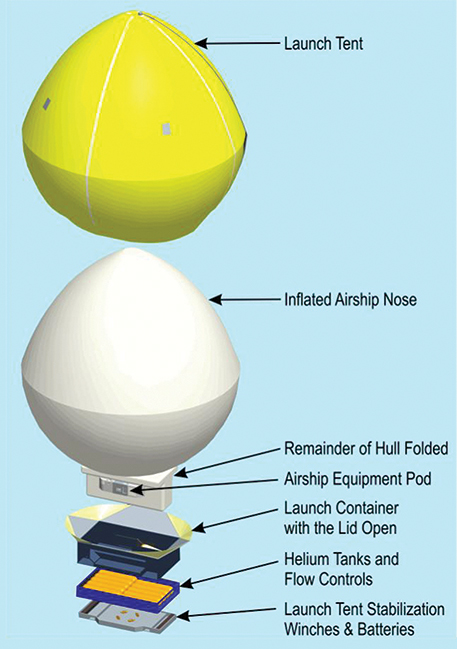 The TALS package comprises the airship, protected within a launch tent, along with all equipment required to launch it. 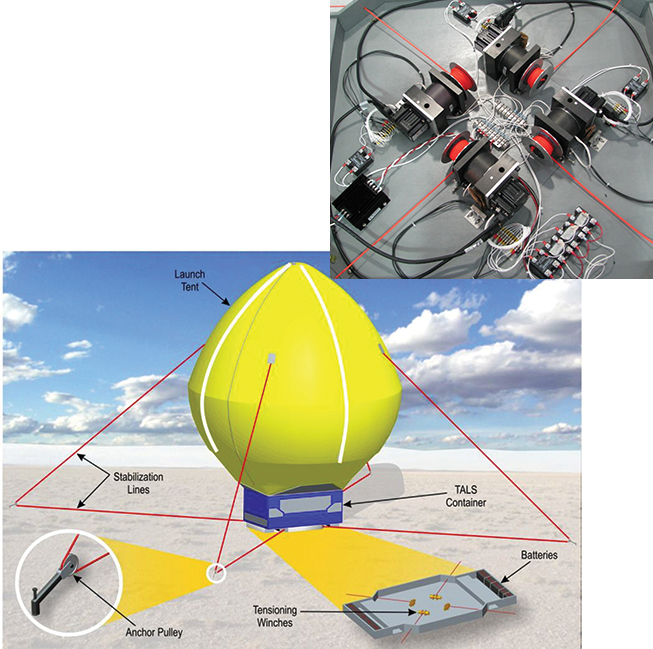 Balloon in a box

As a ﬁnal step, the SwRI team would need to demonstrate the concept for repre-sentatives of the military. The team made plans for a live, on-site demonstration of the 1/3 scale TALS for representatives from the Department of De-fense (DoD) encompassing the U.S. Army Space and Missile Defense Command, Defense Advanced Research Projects Agency and the Ofﬁce of the Secretary of Defense. When a budget-related government shutdown prevented travel to the planned demonstration, the SwRI team conducted the TALS demonstration and sent a video of the successful automated launch demonstration to the DoD representatives.  Based on the promising results of the scale-model proof-of-concept demonstration, they have requested a full-scale TALS be included as an integral part of the next generation HiSentinel Airship program.

The SwRI LTA team’s design and successful demonstration of its TALS system proved the feasibility of a fully automated launch system concept that is applicable to balloons, airships and aerostats. The self-contained TALS can launch LTA vehicles, directly from the container, under local or remote control, in less than 30 minutes, in winds as high as 12 knots, without problems.