December 15, 2020 — Southwest Research Institute has received a $4.5 million U.S. Department of Defense (DoD) contract to create accurate computer models of how materials and structures behave under impact, blasts, and shocks. The work will involve sophisticated state-of-the-art material tests on protective structures commonly used in military bases, embassies, and other structures that may face attack in foreign territories. The contract will support weapons effects research programs at the U.S. Army Engineer Research and Development Center and other potential DoD agencies.

“Computer models of this kind can be very challenging,” said Dr. Sidney Chocron, manager of SwRI’s Computational Mechanics section and the project’s lead investigator. “These materials are taken to extreme pressures, temperatures, and rates, conditions that are quite difficult for a computer to simulate. We need to feed the computers with precise information of the conditions under which a material will crack or fail.”

Chocron will take what is called a “building-block approach” to obtain the most accurate computer models. This starts with testing small specimens at different temperatures and pressures, leading to a small-scale shock-and-blast experiment. From there, he plans to gradually build up to full-scale blast experiments, comparing computer models throughout the process to ensure accuracy.

For the ballistic tests, Chocron will utilize, among other facilities, SwRI’s two-stage light gas gun system, which features a 38-mm-diameter launch tube (1.50 caliber) and is designed to generate very high velocities up to 7 kilometers per second (15,660 mph).

Chocron will also use the SwRI-developed split-Hopkinson pressure bar, an apparatus for testing materials at rates not achievable with conventional testing devices. Since its inception at SwRI in the early 1960s, the Hopkinson bar has now spread all around the world becoming the standard to explore the material properties under extreme environments. The device was named an ASME National Engineering Landmark in 2006.

“The question we’re striving to answer is whether a building or bridge will be safe against a terrorist attack or any kind of significant ballistic event,” Chocron said. “Computer models are often utilized for their predictive accuracy. Experiments can be expensive, and if you’re building a valuable structure that might be attacked, you want to be certain it won’t fail.”

Chocron has already begun work on the project, which is expected to be completed in 2022. 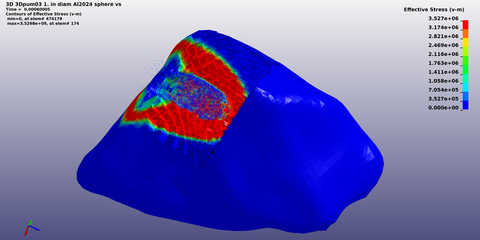