Jan. 13, 2009 — Following two months of commissioning, during which the spacecraft and sensors were tuned for optimum mission performance, the Interstellar Boundary Explorer (IBEX) spacecraft began gathering data to build the first maps of the edge of the heliosphere, the region of space influenced by the Sun.

IBEX is using energetic neutral atom (ENA) imaging to create the first global maps of interactions between the million mile-per-hour solar wind blown out in all directions by the Sun and the low-density material between the stars, known as the interstellar medium.

The maps are built by two ENA cameras, which collectively measure energetic neutral atoms coming in from the edge of the solar system with speeds from about 100 miles per hour to some 36 million miles per hour. Each sensor uses a charge-exchange process that converts incoming neutral atoms into charged ions so they can be analyzed and detected.

The sensors look out from opposite sides of the spacecraft in directions perpendicular to the Sun-pointed spin axis. As the spacecraft spins at 4 revolutions per minute, the measured ENAs fill in the pixels to build a circular swath that appears as a crescent on the map. As the spacecraft's spin axis tracks the Sun, the swaths move across the sky to complete the image.

"We are seeing fabulous initial results from IBEX, but just as artisans use looms to build up colorful textiles by weaving one thread at a time, the IBEX sensors also need time – six months – to build up a complete map of the sky," says Dr. David McComas, IBEX principal investigator and senior executive director of the Space Science and Engineering Division at Southwest Research Institute. "So far, the intricate pattern of this fascinating interaction is only just beginning to disclose itself to us."

IBEX will enable researchers to examine the structures and dynamics of the outer heliosphere and to investigate the acceleration and propagation of charged particles in this complex and important region. IBEX also will address a serious challenge facing manned exploration by studying the region that shields Earth from the majority of galactic cosmic ray radiation.

"The space physics community is holding its collective breath waiting for these maps, which will provide a much deeper understanding of the Sun's interaction with the galaxy," says McComas. "We expect the first complete image, due this summer, to tell us a great deal about the heliosphere's fundamental nature."

McComas will give an invited talk today at the Voyagers in the Heliosheath meeting in Kauai, Hawaii, on the new realm of discovery IBEX will bring as it extends the knowledge about this critical and fascinating region. 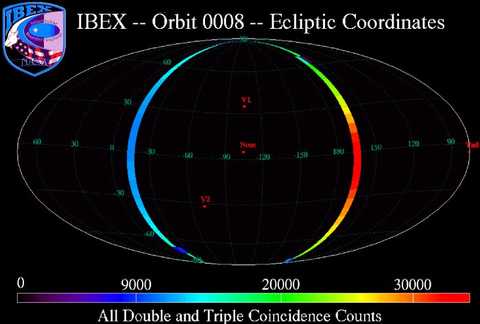