Oct. 23, 2007 – Space physicists have long assumed that the magnetosphere at Jupiter circulates that planet's magnetic field in the same way as Earth. At Earth, this circulation drives the aurora and the magnetic storms that cause space weather. Researchers from Southwest Research Institute® (SwRI®) and the University of Colorado at Boulder have developed a new model that postulates the structure and magnetospheric processes at Jupiter are significantly different from those at Earth.

"For years space physicists have considered the Dungey cycle to be the dominant circulation process in magnetospheres throughout the solar system, even though observations from the largest magnetosphere in the solar system - Jupiter's - didn't add up," says Dr. David McComas, senior executive director of the Space Science and Engineering Division at Southwest Research Institute.

"There are three key ways that the magnetosphere of Jupiter differs from that of Earth," argues Dr. Fran Bagenal, a professor of Astrophysical and Planetary Sciences at CU. "It's much bigger, it spins faster and it has a powerful source of material."

The large size of the Jovian magnetosphere means that the time it takes for material that reconnects in the magnetotail and moves back up to Earth is only about 10 hours, less than half a day. However, the process at Jupiter takes 750 to 1,000 hours.

"Consider that a Jupiter day is only about 10 hours," says McComas. "That means it would take as many as 100 Jovian days for reconnected field lines to move back up to Jupiter - a staggering difference."

Furthermore, the magnetosphere of Jupiter is coupled to the spinning planet. "Imagine stirring up a bowl of spaghetti," says Bagenal. "The fast, 10-hour spin of the Jovian magnetic field complicates the topology of flux tubes that are connected to the planet on one end while the other, open end is swept away by the solar wind."

Another difference is that Jupiter has an active volcanic moon, Io, which spews out roughly a ton of material, mostly sulfur and oxygen, every second. Half of that material is lost through a process called charge exchange, but the other half moves down the Jovian magnetotail as ions dragging the planetary magnetic field tailward. Earth has no such counterpart to impede the return flow back toward the planet.

The new theory suggests a different geometry for closing off the magnetic field that has become interconnected with the solar wind - additional magnetic reconnection with other solar wind field lines that produce closed planetary field lines by reconnecting with open lines anchored back to both magnetic poles. This geometry at Jupiter allows for tailward flow everywhere in the tail and doesn't require a planetward flow, as at Earth. This explains why the polar aurora at Jupiter doesn't look like the terrestrial aurora. It also explains why observations from Ulysses showed that open flux occurs at low latitudes, not at the high latitudes required at Earth. The magnetosphere at Jupiter drags the material further down the sides so that they occur at lower latitudes.

"Our model matches up with the observations - further evidence that the magnetospheric structure and processes at Earth and Jupiter are quite different," says McComas.

McComas and Bagenal determined these processes for Jupiter, yet they could aid in understanding the magnetospheres of the other outer planets, as well as in other astrophysical environments where magnetic fields play an important role.

The paper, "Jupiter: A Fundamentally Different Magnetospheric Interaction with the Solar Wind," by David J. McComas and Fran Bagenal will be published in the Oct. 24 issue of Geophysical Research Letters. 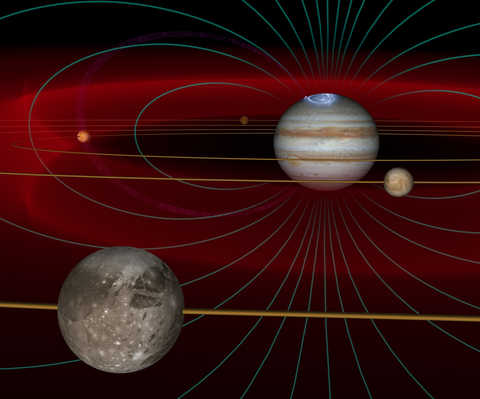 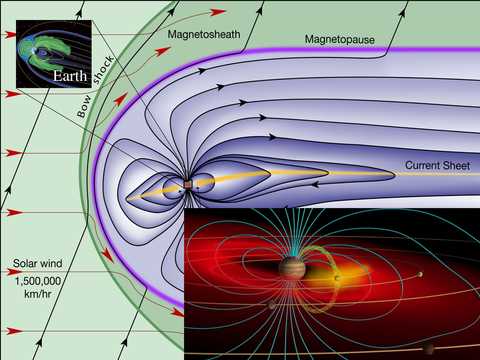