July 29, 2011 — In one week, NASA is scheduled to launch the Juno spacecraft on a mission to Jupiter, the largest planet in our solar system, to answer some fundamental questions about the gas giant and, in turn, about the processes that led to formation of our solar system.

Dr. Scott Bolton, director of the Space Science Department at Southwest Research Institute® (SwRI®), is the Juno principal investigator, leading an international science team seeking to unmask the mysteries that lie beneath the swirling clouds on Jupiter's visible facade, to answer such questions as does Jupiter have a solid core? How deep into the atmosphere do the Great Red Spot and other atmospheric features reach? How much water does Jupiter contain, and where did the water come from? Juno also will take advantage of its polar orbit to produce images of Jupiter's powerful aurora.

Scheduled to launch August 5, 2011, onboard an Atlas V rocket, Juno will swing back by the Earth in 2013 for a gravity-assisted boost and arrive at Jupiter in 2016. Over the course of a year, Juno will orbit the planet 30 times collecting science data. The idea for the Juno mission began as the Cassini spacecraft flew past the gas giant en route to Saturn in 2000.

"We got the idea to look at Jupiter's radiation belts with the microwave antenna that was used for Cassini's radar experiment," said Bolton. "Successfully mapping the radiation belts gave us the first idea of how to design Juno. By drawing on a multidisciplinary team, scientists who observed the radiation belts in the magnetosphere helped figure out how atmospheric scientists could measure the water abundance in Jupiter, and we'll use that knowledge to eventually help understand the origin of Jupiter."

With a suite of nine instruments, scientists are going to look at the internal composition of Jupiter to determine how deep the colorful surface features persist, mapping the atmosphere's composition, temperature, clouds and patterns of movement to unprecedented depths. Measuring water and ammonia levels as well as Jupiter's gravity fields will indicate if the planet has a core of heavy elements and provide evidence about how Jupiter and the rest of the solar system formed.

"The history of volatiles including oxygen across our solar system is very important to the formation of the Earth and life itself," said Bolton. "We don't know where the elements that formed us came from. Since Jupiter likely formed first and took most of the leftovers after the Sun formed, discovering how it was formed will reveal a key piece of our solar system's history."

Scientists are looking for evidence of pressurized hydrogen that is believed to generate Jupiter's massive magnetosphere, a powerful magnetic environment that sparks the brightest aurora in our solar system. Juno will directly sample the charged particles and magnetic fields and simultaneously observe these massive bursts of energy propagating at the poles to better understand these phenomena.

SwRI will also provide two science instruments for the mission. The Jovian Auroral Distributions Experiment will measure the auroral electron and ion populations along the planet's magnetic field lines and determine which particle populations create the Jovian aurora.

"JADE will allow us to make the first direct measurements of the particles that precipitate into Jupiter's atmosphere and produce its stunning auroral displays," said Dr. David J. McComas, assistant vice president of SwRI's Space Science and Engineering Division, who serves as principal investigator of the instrument.

The second instrument, the Juno Ultraviolet Spectrograph (UVS), will image ultraviolet emissions from the Jovian aurora, allowing space scientists to correlate auroral observations with JADE observations of the particle populations that create them.

"Juno's UVS will provide Hubble-like images of Jupiter's powerful and dynamic aurora, but from the much better vantage points of directly above the north and south poles," said Dr. Randy Gladstone, an Institute scientist at SwRI who serves as the UVS principal investigator.

Named for the mythological wife of the god Jupiter, who used her special powers to discover the secrets Jupiter was hiding behind cloud cover, the Juno spacecraft will probe the mysteries beneath Jupiter's surface to understand its structure and history. Jupiter's giant mass has preserved its original composition, perhaps providing a "Rosetta Stone" to explain more about the rest of the solar system as well.

The Juno mission is the second spacecraft designed under NASA's New Frontiers Program. The first was the Pluto New Horizons mission, launched in January 2006 and scheduled to reach Pluto's moon Charon in 2015. NASA's Jet Propulsion Laboratory in Pasadena, Calif., manages the Juno mission and Lockheed Martin of Denver is building the spacecraft. The Italian Space Agency is contributing an infrared spectrometer instrument and a portion of the radio science experiment.

For more information about the Juno mission, visit http://missionjuno.swri.edu.

To view a movie about the mission, see https://www.youtube.com/watch?v=OV-sfNEVFrY.

NOTE: Time and date of the launch are subject to change based on weather and other conditions. Check the following website for the latest launch details: http://www.nasa.gov/mission_pages/juno/launch/index.html. 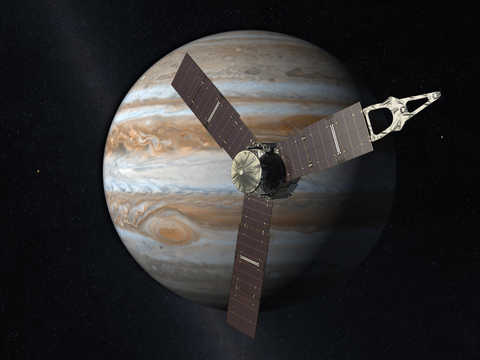