San Antonio — Oct. 11, 2013 — NASA’s Juno spacecraft, which is on its way to Jupiter, resumed full flight operations earlier today. The spacecraft had entered safe mode during its flyby of Earth last Wednesday. The safe mode did not impact the spacecraft's trajectory one smidgeon. This flyby provided the necessary gravity boost to accurately slingshot the probe towards Jupiter, where it will arrive on July 4, 2016.

On Oct. 9, Juno past within 350 miles of the ocean just off the tip of South Africa at 3:21 p.m. EDT (12:21 PDT / 19:21 UTC). Soon after closest approach, a signal was received by the European Space Agency's 15-meter antenna just north of Perth, Australia, indicating the spacecraft initiated an automated fault-protection action called "safe mode."

Safe mode is a state that the spacecraft may enter if its on-board computer perceives conditions on the spacecraft are not as expected. Onboard Juno, the safe mode turned off instruments and a few non-critical spacecraft components, and pointed the spacecraft toward the sun to ensure the solar arrays received power. The spacecraft acted as expected during the transition into and while in safe mode.

The Juno science team is continuing to analyze data acquired by the spacecraft's science instruments during the flyby. Most data and images were down linked prior to the safe mode event.

The Juno spacecraft is named for the mythological wife of the god Jupiter, who used her special powers to discover the secrets Jupiter was hiding behind cloud cover. Much like its namesake, the spacecraft will probe the mysteries beneath the planet’s visible surface to understand its structure and history.

NASA’s Jet Propulsion Laboratory manages the Juno mission for the principal investigator, Scott Bolton, of Southwest Research Institute in San Antonio. The Juno mission is part of the New Frontiers Program managed at NASA’s Marshall Space Flight Center in Huntsville, Ala. Lockheed Martin Space Systems in Denver built the spacecraft. JPL is a division of the California Institute of Technology in Pasadena, Calif.

More information about Juno is online at: http://missionjuno.swri.edu and http://www.nasa.gov/juno. 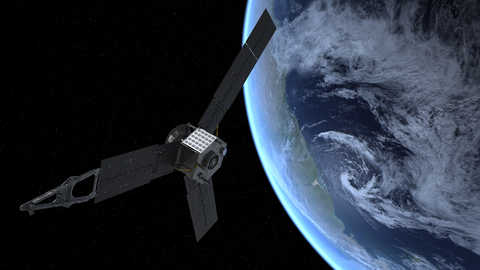