June 5, 2011 — Planetary scientists have long wondered why Mars is only about half the size and one-tenth the mass of Earth. As next-door neighbors in the inner solar system, probably formed about the same time, why isn't Mars more like Earth and Venus in size and mass? A paper published in the journal Nature this week provides the first cohesive explanation and, by doing so, reveals an unexpected twist in the early lives of Jupiter and Saturn as well.

Dr. Kevin Walsh, a research scientist at Southwest Research Institute® (SwRI®), led an international team performing simulations of the early solar system, demonstrating how an infant Jupiter may have migrated to within 1.5 astronomical units (AU, the distance from the Sun to the Earth) of the Sun, stripping a lot of material from the region and essentially starving Mars of formation materials.

"If Jupiter had moved inwards from its birthplace down to 1.5 AU from the Sun, and then turned around when Saturn formed as other models suggest, eventually migrating outwards towards its current location, it would have truncated the distribution of solids in the inner solar system at about 1 AU and explained the small mass of Mars," says Walsh. "The problem was whether the inward and outward migration of Jupiter through the 2 to 4 AU region could be compatible with the existence of the asteroid belt today, in this same region. So, we started to do a huge number of simulations.

"The result was fantastic," says Walsh. "Our simulations not only showed that the migration of Jupiter was consistent with the existence of the asteroid belt, but also explained properties of the belt never understood before."

The asteroid belt is populated with two very different types of rubble, very dry bodies as well as water-rich orbs similar to comets. Walsh and collaborators showed that the passage of Jupiter depleted and then re-populated the asteroid belt region with inner-belt bodies originating between 1 and 3 AU as well as outer-belt bodies originating between and beyond the giant planets, producing the significant compositional differences existing today across the belt.

The collaborators call their simulation the "Grand Tack Scenario," from the abrupt change in the motion of Jupiter at 1.5 AU, like that of a sailboat tacking around a buoy. The migration of the gas giants is also supported by observations of many extra-solar planets found in widely varying ranges from their parent stars, implying migrations of planets elsewhere in universe.

The paper, "A Low Mass for Mars from Jupiter's Early Gas-Driven Migration," published in the June 5 issue of the journal Nature, was written by Walsh; Alessandro Morbidelli of the Université de Nice, France; Sean N. Raymond of Université de Bordeaux, France; David P. O'Brien of Planetary Science Institute in Tucson, Ariz.; and Avi M. Mandell of NASA's Goddard Space Flight Center. The research was funded by the Helmholtz Alliance, the French National Center for Scientific Research and NASA. 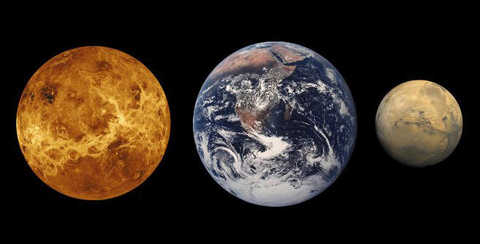