Surprises from the night side of Jupiter

October 10, 2007 -- The New Horizons spacecraft, en route to Pluto, has taken a rare look at Jupiter's night side, yielding some surprising data about the aurora and ultraviolet light emanating from the gas giant. Southwest Research Institute® (SwRI®) scientists, checking out the instruments and testing mission maneuvers in a dress rehearsal for the main event at the edge of the solar system eight years hence, collected reams of Jovian data that have resulted in a paper outlining unexpected discoveries about its nightglow and aurora (one of a group of papers reporting on the New Horizons flyby of Jupiter) in the Oct. 12 issue of the journal Science.

In 1979, the Voyager spacecraft provided the first look at ultraviolet light from the night side of Jupiter. Since then, scientists have examined extensively the gas giant's dayside, and based on the data, developed detailed models of the Jovian system. However, the New Horizons data that scientists expected to see, in terms of UV light, and what they found, are as different as night and day.

Although the Voyager flyby detected marked ultraviolet night-side emissions of the signature Lyman-alpha glow of atomic hydrogen almost 30 years ago, data collected by the SwRI-developed Alice UV spectrograph this spring showed almost none. Additionally, the auroral energy deposited at night in Jupiter's upper atmosphere has the opposite dependence with local time as occurs on the dayside. A fortuitous observation of visible emissions associated with the interaction between Jupiter and its satellite Io shows that they are structured and that they extend to a surprisingly high altitude.

The substantial night-time airglow observed by Voyager in 1979 and Galileo in 1996-1997 suggested low-latitude particle precipitation, which could contribute to the heating of Jupiter's unusually hot upper atmosphere and account for low-latitude X-ray emissions. In contrast, the new observations by New Horizons indicate no substantial low-latitude particle precipitation is currently occurring, and that Jupiter's upper atmosphere must have significantly changed between these epochs.

These results are even more puzzling, because the Voyager flybys occurred during solar maximum, while Galileo observations and the New Horizons flyby both took place during solar minimum.

Auroral spectroscopy from both the Hubble Space Telescope and the Ultraviolet Imaging Spectrograph on Cassini has shown that the most energetic of Jupiter's auroral particles are found on the dawn side of the planet, as seen on the dayside from the vantage point of Earth. In contrast, the Alice UV scans indicate the most energetic auroral particles on the night side of Jupiter are located near dusk. This is unusual because, unlike on Earth, Jupiter's auroral oval rotates with the planet, and most features of the aurora do likewise.

"This is a surprising result. The energetic electrons responsible for these night side emissions are probably from high latitudes connected to the dusk flank of the magnetosphere, which is also fixed in solar local time," Gladstone said. "However, there are some other features of the main auroral oval that remain fixed in local time and don't appear to rotate. The Alice data imply that the energy of precipitating electrons is highest just after sunset and decreases as the night goes on at Jupiter."

Observing the Io Flux Tube, a cylinder of magnetic flux formed by Jovian magnetic field lines that transiently interact with the atmosphere of the satellite Io, was serendipitous. New Horizon's Long Range Reconnaissance Imager or LORRI visible camera only planned to observe the main Jovian aurora, however, the timing was right to catch the Io Flux Tube in profile right at the edge of Jupiter. The resulting images show that the spot of aurora that occurs when electrons in the Io Flux Tube hit the atmosphere of Jupiter has considerable structure and extends to more than 1,000 km above the planet. The high altitude of the emissions may indicate that electrons in the Io Flux Tube are less energetic on the night side than on the dayside. 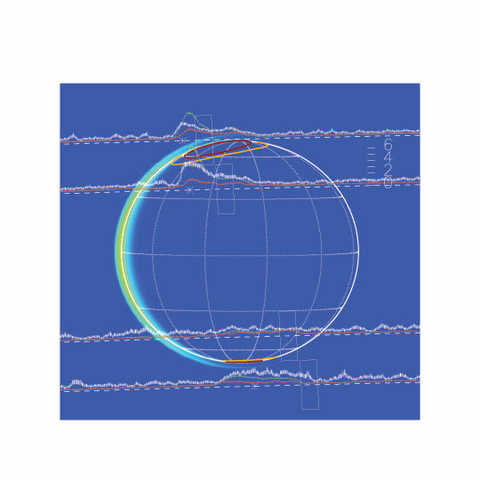