April 12, 2007 — Researchers from Southwest Research Institute® (SwRI®) and four major oil companies have joined in a multi-year project to study the geology and stratigraphy of the Hidden Valley Fault. An historic 2002 flood at Canyon Lake, in Comal County, Texas, carved a deep gorge into the floor of the lake's spillway, exposing this fault.

The flooding, brought on by 35 inches of rain in eight days, sent a wall of water more than seven feet tall over the 1,250-foot wide spillway and into a narrow valley behind Canyon Dam. The 70,000-cubic-feet-per-second torrent cut into the valley floor, removing thousands of cubic yards of soil, bedrock and limestone blocks.

When the floodwaters receded, what remained was a pristine gorge containing rocks that had not been exposed since dinosaurs roamed the Earth more than 65 million years ago.

Besides containing the best exposure of part of the Upper and Lower Glen Rose limestone formation available in Texas, the gorge also reveals a nearly continuous, 2,600-foot section of the Hidden Valley Fault. This fault is a fracture zone along which the Glen Rose Formation strata were displaced, or slipped nearly 250 feet downward, toward the Gulf of Mexico. Although the fault was known and had been studied in the 1960s when Canyon Dam was built, no one has had a clear view of it until after the flood of 2002.

The gorge has become an unprecedented natural laboratory for geologists. Working together with a consortium of major oil companies, SwRI has created a one-of-a-kind outdoor laboratory for studying faults found in limestone aquifers as well as petroleum reservoirs in Texas and around the world.

Within a few months of the flood, SwRI initiated projects at the site that were jointly funded by the Edwards Aquifer Authority and the U.S. Army Corps of Engineers. These projects studied the geologic structures and related hydrology of the Edwards and Trinity aquifers as seen at the gorge.

"Because this fault is typical of thousands of miles of mapped faults in the Edwards and Trinity aquifers in the Balcones Fault Zone, the interplay of water and layering, faults and fractures in the Canyon Lake Gorge provides a remarkable opportunity to gain new insights into limestone aquifer behavior," said Dr. David Ferrill, director of the Earth, Material, and Planetary Sciences Department of SwRI's Geosciences and Engineering Division.

The latest project will study the Canyon Lake Gorge as a model for limestone structures that contain oil and gas. SwRI researchers have worked with oil company representatives to develop a joint study that will begin in 2007. This multi-year project will focus first on a detailed characterization of the stratigraphy and structure of the Hidden Valley Fault. It will include outcrop characterization and mapping and microstructural analysis, as well as drilling, coring and subsurface characterization.

In future years, the project is expected to use geomechanical analysis and modeling to hone the oil industry's ability to predict rock deformation in reservoirs before drilling, and the permeability characteristics of fault zones and surrounding rock to improve fault representations in reservoir models. 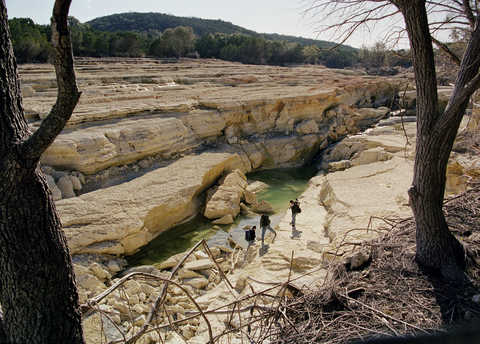