Sept. 17, 2009 — NASA's Lunar Reconnaissance Orbiter (LRO), launched on June 18 of this year, has begun its extensive exploration of the lunar environment and will return more data about the Moon than any previous mission. The Lyman-Alpha Mapping Project (LAMP), developed by Southwest Research Institute® (SwRI®), is an integral part of the LRO science investigation. LAMP uses a novel method to peer into the perpetual darkness of the Moon's so-called permanently shadowed regions.

LAMP "sees" the Moon's surface using the ultraviolet light from nearby space and stars, which bathes all bodies in space in a soft glow of ultraviolet light. A particularly bright ultraviolet emission is the so-called Lyman-alpha emission. Like all ultraviolet light, Lyman alpha is invisible to our eyes and cameras, but visible to LAMP as it reflects off the Moon.

"LAMP is working well. In fact, LAMP is more sensitive than we expected, which is fantastic," says team member Dr. Alan Stern, associate vice president of the SwRI Space Science and Engineering Division.

"We're already seeing some interesting variations in the limited data we've received so far," says Institute Scientist Dr. Randy Gladstone, LAMP acting principal investigator. "We can't make any firm assessments yet, but they are correlating well with some of the permanently shadowed craters in the region of the south pole."

LAMP is nearly identical to the successful Alice instruments developed by SwRI, already flying aboard the joint NASA/ESA Rosetta spacecraft, which is targeting the ancient comet Churyumov-Gerasimenko, and NASA's New Horizons spacecraft, which will probe the atmospheric composition of Pluto and search for an atmosphere over its large moon Charon. LAMP weighs only 6.1 kilograms and uses only 4.5 watts of power.

The planned Oct. 9 impact into the Moon of the Lunar Crater Observation and Sensing Satellite (LCROSS), which launched with LRO, complements the search for water. Several LRO instruments will watch as a plume of debris and possibly water vapor rise from the impact. During subsequent orbits, LAMP will look for gases liberated during the impact as they migrate across the Moon.

LRO's findings are expected to be valuable to the future consideration of a permanent Moon base. Just as the south pole hosts permanently shadowed regions because of the Moon's orientation to the Sun, it also hosts areas that are in nearly perpetual sunlight, which would enable the operation of solar-powered equipment. Any discovery of water-frost and other resources in the area also would reduce the need to transport resources from Earth.

Upon the conclusion of the one-year reconnaissance mission for NASA's Exploration Systems Mission Directorate, NASA's Science Mission Directorate will oversee in-depth investigations for the science instruments. At that time, LAMP may shift into more detailed evaluations of the Moon's atmosphere and its variability.

LRO is one of the first missions in NASA's plan to return to the Moon and then to travel to Mars and beyond. The Goddard Space Flight Center manages the LRO mission for NASA's Exploration Systems Mission Directorate. 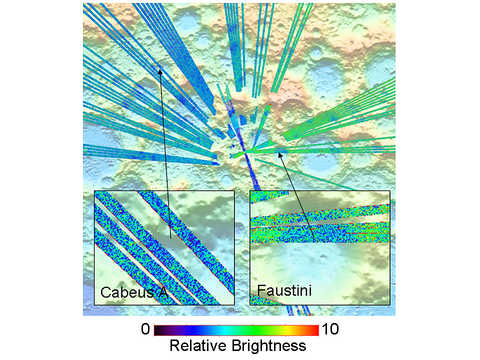