October 8, 2020 — As the days count down to NASA’s OSIRIS-REx spacecraft’s Touch-And-Go asteroid sample collection attempt, Southwest Research Institute scientists have helped determine what the spacecraft can expect to return from the near-Earth asteroid Bennu’s surface. Three papers published online by Science on Oct. 8 discuss the color, reflectivity, age, composition, origin and distribution of materials that make up the asteroid’s rough surface.

On October 20, the spacecraft will descend to the asteroid’s boulder-strewn surface, touch the ground with its robotic arm for a few seconds and collect a sample of rocks and dust – marking the first time NASA has grabbed pieces of an asteroid for return to Earth. SwRI scientists played a role in the selection of the sample sites. The first attempt will be made at Nightingale, a rocky area 66 feet in diameter in Bennu’s northern hemisphere. If this historic attempt is unsuccessful, the spacecraft will try again at a secondary site.

Since the spacecraft arrived at Bennu in 2018, scientists have been characterizing the asteroid's composition and comparing it to other asteroids and meteorites. The mission discovered carbon-bearing compounds on Bennu’s surface, a first for a near-Earth asteroid, as well as minerals containing or formed by water. Scientists also studied the distribution of these materials, globally and at the sample sites

“Our recent studies show that organics and minerals associated with the presence of water are scattered broadly around Bennu’s surface, so any sample returned to Earth should contain these compounds and minerals,” said SwRI’s Dr. Vicky Hamilton, a coauthor on all three papers. “We will compare the sample’s relative abundances of organics, carbonates, silicates and other minerals to those in meteorites to help determine the scenarios that best explain Bennu’s surface composition.”

Asteroid Bennu is a dark, rubble pile held together by gravity and thought to be the collisional remnant of a much larger main-belt object. Its rubble-pile nature and heavily cratered surface indicates that it has had a rough-and-tumble life since being liberated from its much larger parent asteroid millions or even billions of years ago.

“Boulders strewn about near the Nightingale site have bright carbonate veins,” Hamilton said. “Bennu shares this compositional trait with aqueously altered meteorites. This correlation suggests that at least some carbonaceous asteroids were altered by percolating water in the early Solar System.”

“Bennu’s diverse surface includes abundant primitive material potentially from different depths in its parent body plus a small proportion of foreign materials from another asteroid family littered about its surface,” said SwRI’s Dr. Kevin Walsh, a coauthor of one of the papers. “In addition, both the primary and back-up sample sites, Nightingale and Osprey, are situated within small spectrally reddish craters that are thought to be more pristine, having experienced less space weathering than most of Bennu’s bluish surface.”

The OSIRIS-REx team is also comparing Bennu to Ryugu, another near-Earth asteroid. Both asteroids are thought to have originated from primitive asteroid families in the inner main belt. The Japan Aerospace Exploration Agency launched Hayabusa2 in 2014 and rendezvoused with near-Earth asteroid Ryugu in 2018. After surveying the asteroid for a year and a half, the spacecraft collected samples and is expected to return to Earth December 6, 2020.

The sample returned by OSIRIS-REx, combined with the surface context maps OSIRIS-REx has collected, will improve interpretations of available ground and space telescope data for other primitive dark asteroids. Comparing returned Bennu samples with those of Ryugu will be instrumental for understanding the diversity within, and history of, asteroid families and the entire asteroid belt. 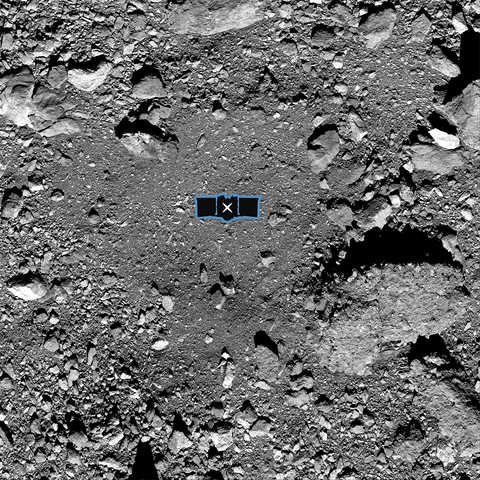