April 15, 2010 — The eerie glow that straddles the night time zodiac in the eastern sky is no longer a mystery. First explained by Joshua Childrey in 1661 as sunlight scattered in our direction by dust particles in the solar system, the source of that dust was long debated. In a paper to appear in the April 20 issue of The Astrophysical Journal, David Nesvorny and Peter Jenniskens put the stake in asteroids. More than 85 percent of the dust, they conclude, originated from Jupiter Family comets, not asteroids.

"This is the first fully dynamical model of the zodiacal cloud," says planetary scientist Nesvorny of the Southwest Research Institute® (SwRI®) in Boulder, Colo. "We find that the dust of asteroids is not stirred up enough over its lifetime to make the zodiacal dust cloud as thick as observed. Only the dust of short-period comets is scattered enough by Jupiter to do so."

This result confirms what meteor astronomer Jenniskens of the SETI Institute in Mountain View, Calif., had long suspected. An expert on meteor showers, he had noticed that most consist of dust moving in orbits similar to those of Jupiter Family comets, but without having active dust-oozing comets associated with them.

Instead, Jenniskens discovered a dormant comet in the Quadrantid meteor shower in 2003 and has since identified a number of other such parent bodies. While most are inactive in their present orbit around the Sun, all have in common that they broke apart violently at some point in time in the past few thousand years, creating dust streams that now have migrated into Earth's path.

Nesvorny and Jenniskens, with the help of Harold Levison and William Bottke of the Southwest Research Institute, David Vokrouhlicky of the Institute of Astronomy at Charles University in Prague, and Matthieu Gounelle of the Natural History Museum in Paris, demonstrated that these comet disruptions can account for the observed thickness of the dust layer in the zodiacal cloud.

In doing so, they solved another mystery. It was long known that snow in Antarctica is laced with micro-meteorites, some 80 to 90 percent of which have a peculiar primitive composition, rare among the larger meteorites that we know originated from asteroids. Instead, Nesvorny and Jenniskens suggest that most antarctic micro-meteorites are pieces of comets. According to their calculations, cometary grains dive into Earth's atmosphere at entry speeds low enough for them to survive, reach the ground, and be picked up later by a curious micro-meteorite hunter.

More information is at http://cams.seti.org. 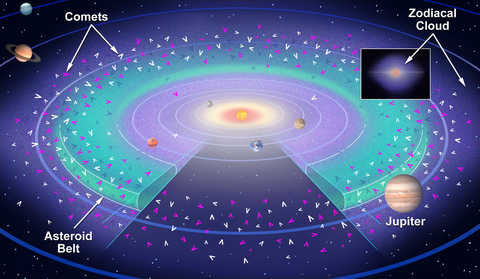