San Antonio — April 3, 2017 —Last week, NASA’s Cyclone Global Navigation Satellite System (CYGNSS) mission successfully completed its development and commissioning phase and moved into the operations phase. The constellation of eight microsatellites — the first engineered and fabricated by Southwest Research Institute (SwRI) — has now started on-orbit instrument calibration and validation and is on track to collect data for the 2017 hurricane season.

Following their launch December 15, 2016, the CYGNSS spacecraft entered a low-inclination, low-Earth orbit over the tropics. From this vantage point, they will make frequent measurements of ocean surface winds in and near a hurricane’s inner core to better understand how storms intensify.

“All spacecraft have completed their engineering tests and are performing to specifications,” said SwRI’s Randy Rose, CYGNSS project systems engineer. “It is very gratifying to see how well everything is working. Weather scientists are going to get everything they’d hoped for, and more.”

Over the years, forecasters have improved hurricane path prediction significantly, but the ability to predict the intensity of storms has lagged behind.  It was difficult and dangerous to collect data in the midst of the storm, and space technology could not provide accurate measurements. Because GPS signals are able to penetrate the intense rain in a storm’s eye wall, CYGNSS uses these signals reflected off the ocean surface to calculate wind speeds. By advancing our understanding of how storms intensify, CYGNSS data are expected to enable improved hurricane forecasting.

“With CYGNSS, we’re doing real science with a satellite small enough to literally sit on your desk,” said John Scherrer, a program director in SwRI’s Space Science and Engineering Division who oversaw satellite construction. “While these satellites might be small, they provide big returns with data that we expect to one day help weather forecasters make better predictions about storm damage and more informed decisions about evacuation orders.”

CYGNSS demonstrated its ability to observe surface winds during its first tropical storm flyover on March 6, 2017, just hours before Tropical Cyclone Enawo made landfall on Madagascar.

“The satellites’ measurements responded as expected to changes in the wind speed as they approached and passed over the storm’s center, showing strong and reliable sensitivity throughout,” said Chris Ruf, professor of atmospheric science at the University of Michigan and CYGNSS Principal Investigator. 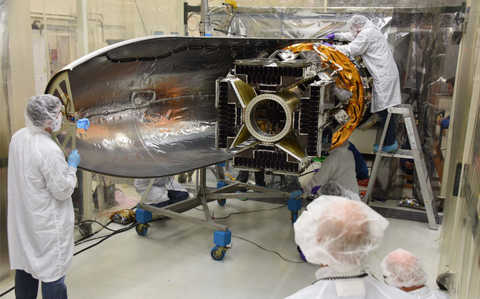