San Antonio, Texas — August 29, 2016 —Southwest Research Institute will flight test a miniature solar observatory on a six-hour high-altitude balloon mission scheduled for the end of August. The SwRI Solar Instrument Pointing Platform (SSIPP) is a complete, high-precision solar observatory about the size of a mini fridge and weighing 160 pounds.

“This novel, low-cost prototype was developed for less than $1 million, which is one-tenth the cost of other comparable balloon-borne observatories,” said Principal Investigator Dr. Craig DeForest, a principal scientist in SwRI’s Space Science and Engineering Division. “Funded by NASA’s Game-Changing Technologies program, SSIPP is a reusable, optical table-based platform. This novel approach breaks down barriers to science by allowing low-cost solar research.”

SSIPP collects solar data using infrared, ultraviolet, or visible light instruments on an optical table, similar to those used in ground-based observatories but from a near-space environment. This arcsecond-class observatory provides optical precision equivalent to imaging a dime from a mile away. Originally conceived to fly aboard a commercial suborbital rocket, SSIPP has now been adapted for balloon flight. Collecting data from the edge of space — around 20 miles above the Earth’s surface — avoids image distortions caused by looking through the atmosphere.

During the demonstration, scientists will spend two hours commissioning the observatory and searching for visible signatures of “high-frequency” solar soundwaves, which are actually some eight octaves below the deepest audible notes. By contrast, the most studied sound waves in the Sun (the solar “P-modes” used to probe the solar interior) are five octaves deeper still.

The surface of the Sun is covered with granular convection cells analogous to a pot of water at a rolling boil. Continuously, every 5 minutes, a million of these cells erupt, creating sound waves at a range of frequencies. SSIPP will image the solar atmosphere to understand their heat and noise properties. The comparatively high frequency of the “solar ultrasound” waves makes them undetectable by ground-based observatories.

“The transfer of heat to the surface of our star is a violent and tremendously loud process,” DeForest said. “Soundwaves heat the solar atmosphere to extremely high temperatures, but it’s a poorly understood process. Existing measurements of the solar infrasound cannot account for all the energy required.” 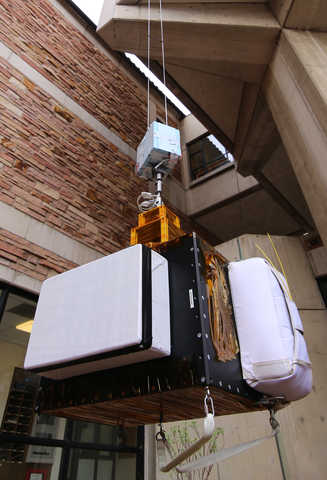