SwRI researchers offer explanation for the differences between Ganymede and Callisto

Jan. 24, 2010 — Differences in the number and speed of cometary impacts onto Jupiter's large moons Ganymede and Callisto some 3.8 billion years ago can explain their vastly different surfaces and interior states, according to research by scientists at the Southwest Research Institute® (SwRI®) appearing online in Nature Geoscience Jan. 24, 2010.

Ganymede and Callisto are similar in size and are made of a similar mixture of ice and rock, but data from the Galileo and Voyager spacecraft show that they look different at the surface and on the inside. A conclusive explanation for the differences between Ganymede and Callisto has eluded scientists since the Voyager Jupiter encounters 30 years ago.

Dr. Amy C. Barr and Dr. Robin M. Canup of the SwRI Planetary Science Directorate created a model of melting by cometary impacts and rock core formation to show that Ganymede and Callisto's evolutionary paths diverged about 3.8 billion years ago during the Late Heavy Bombardment, the phase in lunar history dominated by large impact events.

"Impacts during this period melted Ganymede so thoroughly and deeply that the heat could not be quickly removed. All of Ganymede's rock sank to its center the same way that all the chocolate chips sink to the bottom of a melted carton of ice cream," says Barr. "Callisto received fewer impacts at lower velocities and avoided complete melting."

In the Barr and Canup model, Jupiter's strong gravity focuses cometary impactors onto Ganymede and Callisto. Each impact onto Ganymede or Callisto's mixed ice and rock surface creates a pool of liquid water, allowing rock in the melt pool to sink to the moon's center. Ganymede is closer to Jupiter and therefore is hit by twice as many icy impactors as Callisto, and the impactors hitting Ganymede have a higher average velocity. Modeling by Barr and Canup shows that core formation begun during the late heavy bombardment becomes energetically self-sustaining in Ganymede but not Callisto.

The study sheds new light on the "Ganymede-Callisto dichotomy," a classical problem in comparative planetology, a field of study that seeks to explain why some solar system objects with similar bulk characteristics have radically different appearances. In particular, the study links the evolution of Jupiter's moons to the orbital migration of the outer planets and the bombardment history of Earth's moon.

"Similar to Earth and Venus, Ganymede and Callisto are twins, and understanding how they were born the same and grew up to be so different is of tremendous interest to planetary scientists," explains Barr. "Our study shows that Ganymede and Callisto record the fingerprints of the early evolution of the solar system, which is very exciting and not at all expected."

The NASA Planetary Geology and Geophysics program funded this research. The article, "Origin of the Ganymede-Callisto dichotomy by impacts during the late heavy bombardment," by Barr and Canup, appears online in Nature Geoscience on Jan. 24, 2010. 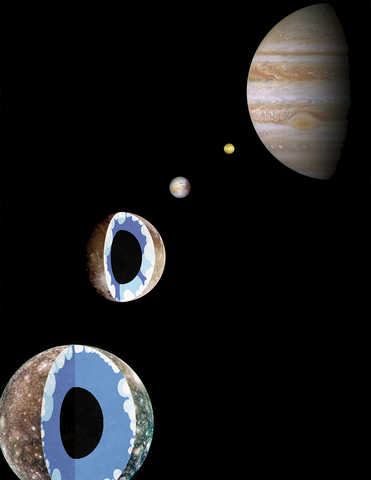 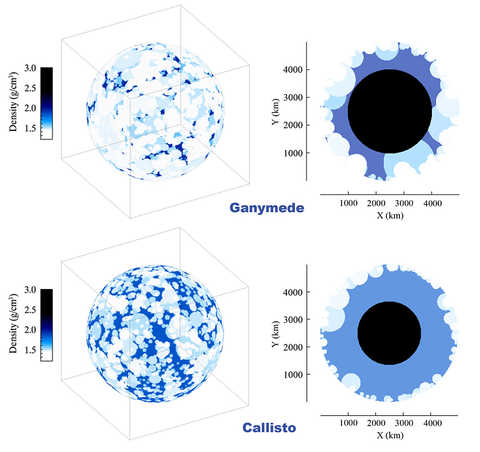