“Opening this door gives us six times better quality data when mapping the lunar dayside,” said SwRI’s Dr. Kurt Retherford, principal investigator of LAMP. Lyman-alpha emissions are produced by nearby space and stars and bathe all bodies in a soft glow of UV light. UV frequencies are invisible to human eyes and cameras, but visible to LAMP as they reflect off the moon. On the nightside, LAMP “sees” the moon’s surface using this soft UV glow. On the dayside, LAMP measures light reflected from the Sun as well.

"With its enhanced data collection capabilities, LAMP is like a brand new instrument,” said SwRI’s Dr. Thomas Greathouse, LAMP deputy principal investigator. “After seven years of near continuous operations in the previous mode, now is a good time to change our science emphasis for the next two years of LRO’s extended mission.”

Key results that LAMP has made in the past include discovering water frost in the permanently shaded craters near the lunar south pole. The instrument also collected evidence that a surprising number of water molecules travel across the moon’s surface on the dayside. It is these dayside measurements that are most affected by the new operating parameters. Prior to opening the “failsafe” door, scientists have averaged the data collected over multiple orbits to characterize the dayside surface.

“The amount of water measured appears to be influenced by the time of day,” said SwRI Senior Research Scientist Dr. Kathleen Mandt. “In this new mode, we will get much higher resolution data from every orbit, allowing us see how water on the surface increases and decreases over shorter time periods than before.”

Space instrument designers minimize the number of moving parts to increase reliability. LAMP has an “aperture door,” which opens during use and closes when not in use, to protect sensitive components. The instrument also has a failsafe door, originally intended to remain closed during normal operations.

“If the aperture door failed to open, the failsafe door was designed to be opened to allow 10 percent of the light to get through, allowing the science to continue, but at reduced sensitivity,” said SwRI’s Michael Davis, LAMP instrument scientist. “The flawless performance of the LAMP instrument over the seven years aboard LRO is a testament to the engineering quality.”

“We’ve never had to use this door in its backup capacity,” added Maarten Versteeg, who developed LAMP’s software. “However, when looking at the LAMP data, we realized that having the door open could enhance the extended mission, so we sent up commands to flip it open.”

The LRO mission was recently extended to September 2018, in part to allow LAMP to further investigate changes in UV signatures of hydrated minerals with the local time of day. Initially discovered by infrared instrumentation, these molecular layers of water are supported by LAMP UV measurements. However, the discovery is not well understood with regard to their ultimate source and influence. 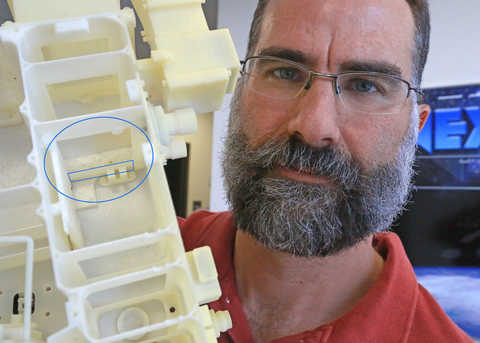