San Antonio — July 31, 2014 — A new terrestrial bombardment model developed by an international group of scientists led by Southwest Research Institute (SwRI) indicates that Earth’s surface was heavily reprocessed — or melted, mixed and buried — as a result of giant asteroid impacts more than four billion years ago.

The model, calibrated using existing lunar and terrestrial data, sheds light on the role asteroid collisions played in the geological evolution of the uppermost layers of Earth during the geologic eon call the “Hadean,” or first geologic eon, approximately four to 4.5 billion years ago.

The team, which also included academic and government researchers, published its findings in a paper, “Widespread Mixing and Burial of Earth’s Hadean Crust by Asteroid Impacts,” in the July 31, 2014, issue of the journal Nature.

“Prior to approximately four billion years ago, no large region of Earth’s surface could have survived untouched by impacts and their effects,” said Dr. Simone Marchi, lead author of the paper and a planetary scientist in SwRI’s Planetary Science Directorate in Boulder, Colo. “The new picture of the Hadean Earth emerging from this work has important implications for its habitability,” Marchi said.

“During that time, the lag between major collisions was long enough to allow intervals of more clement conditions, at least on a local scale,” Marchi said. “Any life emerging during the Hadean eon likely needed to be resistant to high temperatures and could have survived such a violent period in Earth’s history by thriving in niches deep underground or in the ocean’s crust.”

Terrestrial planet formation models indicate Earth went through a sequence of major growth phases: initially accretion of planetesimals — planetary embryos — over many tens of millions of years; then a giant impact that led to the formation of the Moon; followed by the late bombardment when giant asteroids several tens to hundreds of miles in size periodically hit ancient Earth, dwarfing the one that presumably killed the dinosaurs (estimated to be six miles in size), only 65 million years ago.

Researchers estimate that accretion during the late bombardment contributed less than one percent of Earth’s present-day mass, but the giant asteroid impacts still had a profound effect on the geological evolution of early Earth. Prior to four billion years ago Earth was resurfaced over and over by voluminous, impact-generated melt.

Furthermore, large collisions as late as about four billion years ago may have repeatedly boiled away existing oceans into steamy atmospheres. Despite the heavy bombardment, the findings are compatible with the claim of liquid water on Earth’s surface as early as about 4.3-4.4 billion years ago based on geochemical data.

The new research reveals that asteroidal collisions not only severely altered the geology of the Hadean eon Earth, but also likely played a major role in the evolution of life on early Earth as well.

The team was comprised of Marchi and Dr. William Bottke from SwRI; L. Elkins-Tanton from Carnegie Institution for Science in Washington; M. Bierhaus and K. Wünnemann from the Museum fur Naturkunde in Berlin, Germany; A. Morbidelli from Observatoire de la Côte d’Azur in Nice, France; and D. Kring from the Universities Space Research Association and the Lunar and Planetary Institute in Houston.

SSERVI is a virtual institute that, with international partnerships, brings science and exploration researchers together in a collaborative virtual setting. SSERVI is funded by the Science Mission Directorate and Human Exploration and Operations Mission Directorate at NASA Headquarters in Washington. For more information about SSERVI and selected member teams, visit: http://sservi.nasa.gov. 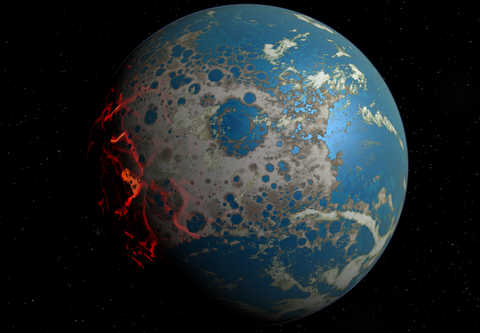