July 6, 2021 — Scientists have used data from the Southwest Research Institute-led Magnetospheric Multiscale (MMS) mission to explain the presence of energetic heavy elements in galactic cosmic rays (GCRs). GCRs are composed of fast-moving energetic particles, mostly hydrogen ions called protons, the lightest and most abundant elements in the universe. Scientists have long debated how trace amounts of heavy ions in GCRs are accelerated.

The supernova explosion of a dying star creates massive shockwaves that propagate through the surrounding space, accelerating ions in their path to very high energies, creating GCRs. How heavy ions are energized and accelerated is important because they affect the redistribution of mass throughout the universe and are essential for the formation of even heavier and more chemically complex elements. They also influence how we perceive astrophysical structures.

“Heavy ions are thought to be insensitive to an incoming shockwave because they are less abundant, and the shock energy is overwhelmingly consumed by the preponderance of protons. Visualize standing on a beach as waves move the sand under your feet, while you remain in place,” said SwRI’s Dr. Hadi Madanian, the lead author of the paper about this research published in Astrophysical Journal Letters. “However, that classical view of how heavy ions behave under shock conditions is not always what we have seen in high-resolution MMS observations of the near-Earth space environment.”

Shock phenomena also occur in the near-Earth environment. The Sun’s magnetic field is carried through interplanetary space by the supersonic solar wind flow, which is obstructed and diverted by the Earth’s magnetosphere, a bubble of protection around our home planet. This interaction region is called the bow shock due to its curved shape, comparable to the bow waves that occur as a boat travels through water. The Earth’s bow shock forms at a much smaller scale than supernova shocks. However, at times, conditions of this small shock resemble those of supernova remnants. The team used high-resolution in-situ measurements from the MMS spacecraft at the bow shock to study how heavy ions are accelerated.

“We observed intense amplification of the magnetic field near the bow shock, a known property associated with strong shocks such as supernova remnants. We then analyzed how different ion species behaved as they encountered the bow shock,” Madanian said. “We found that these enhanced fields significantly modify the trajectory of heavy ions, redirecting them into the acceleration zone of the shock.”

While this behavior was not expected to occur for heavy ions, the team identified direct evidence for this process in alpha particles, helium ions that are four times more massive than protons and have twice the charge.

“The superb resolution of MMS observations has given us a much clearer picture of how a shockwave energizes the heavy elements. We will be able to use this new understanding to improve our computer models of cosmic ray acceleration at astrophysical shocks,” said David Burgess, a professor of mathematics and astronomy at Queen Mary University of London and a coauthor of the paper. “The new findings have significant implications for the composition of cosmic rays and the observed radiation spectra from astrophysical structures.”

NASA’s four MMS satellites use the near-Earth environment as a laboratory to study various space physics phenomena. Goddard Space Flight Center built, integrated and tested the four MMS spacecraft and is responsible for overall mission management and mission operations. The principal investigator for the MMS instrument suite science team is based at SwRI in San Antonio, Texas. Science operations planning and instrument commanding are performed at the MMS Science Operations Center at the University of Colorado’s Laboratory for Atmospheric and Space Physics in Boulder. 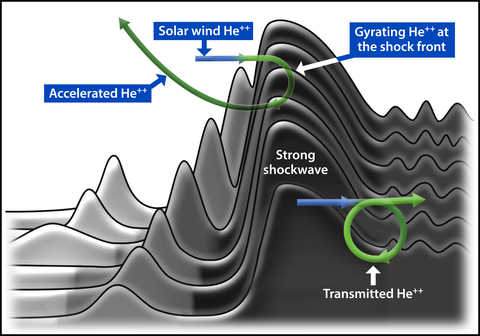