San Antonio — April 8, 2016 — For decades, scientists have agreed that comets are mostly water ice, but what kind of ice — amorphous or crystalline — is still up for debate. Looking at data obtained by ESA’s Rosetta spacecraft in the atmosphere, or coma, around comet 67P/Churyumov-Gerasimenko, scientists at Southwest Research Institute (SwRI) are seeing evidence of a crystalline form of ice called clathrates.

“The structure and phase of the ice is important because it tells us a lot about how and where the comet may have formed,” says Dr. Adrienn Luspay-Kuti, a research scientist in SwRI’s Space Science and Engineering Division. She is lead author of a paper titled “The presence of clathrates in comet 67P/Churyumov-Gerasimenko” published in the April 8 issue of the journal Science Advances. “If the building blocks of 67P were predominantly crystalline ices and clathrates, then 67P likely agglomerated from chunks of ice closer to the Sun. The protosolar nebula closer to the Sun experienced higher temperatures and more turbulence where crystalline ices could form as the nebula cooled. More pristine amorphous ices likely dominated the colder outskirts of the rotating disk of dust and gas that surrounds the core of a developing solar system.”

“Without direct sampling of the nucleus interior, evaluating the composition of the coma provides the best clues about the ice structure and, as a result, the possible origin of cometary nuclei,” said Luspay-Kuti. “Thought to closely reflect the composition of the building blocks of our solar system, comets carry important information about the prevalent conditions in the solar nebula before and after planet formation. These small icy bodies help us understand the big picture.”

The multi-institute team of cometary scientists analyzed mass spectrometer data from the southern region of 67P from September to October 2014, before equinox. 67P is a Jupiter family comet thought to originate from the Kuiper Belt. Scientists are comparing these new data with data from the flyby of Hartley 2 — considered cometary kin in family and origin to 67P — and finding correlations. If these comets formed closer to the Sun than originally thought, these data could help refine solar system formation models.

This research was supported by NASA’s Jet Propulsion Laboratory, Cornell University, the French National Research Agency, Centre National d’Études Spatiales, and the James Webb Space Telescope project. Rosetta is an ESA mission with contributions from its member states and NASA. Airbus Defense and Space built the Rosetta spacecraft. JPL manages the U.S. contribution of the Rosetta mission for NASA’s Science Mission Directorate in Washington, D.C., under a contract with the California Institute of Technology. 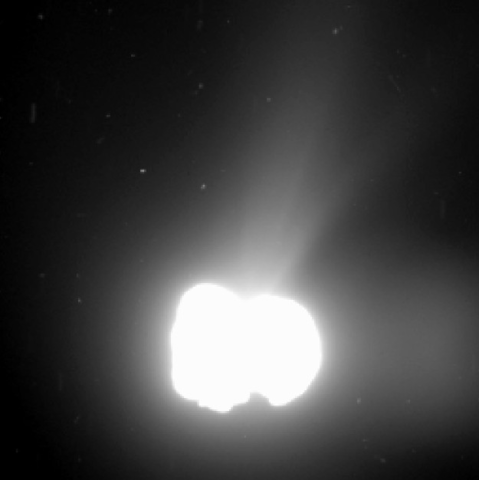