“We think these newly discovered faint ultraviolet features originate millions of miles away from Jupiter, near the Jovian magnetosphere’s boundary with the solar wind,” said Dr. Vincent Hue, lead author of a paper accepted by the Journal of Geophysical Research: Space Physics. “The solar wind is a supersonic stream of charged particles emitted by the Sun. When they reach Jupiter, they interact with its magnetosphere in a way that is still not well understood.”

“Despite decades of observations from Earth combined with numerous in-situ spacecraft measurements, scientists still do not fully understand the role the solar wind plays in moderating Jupiter’s auroral emissions,” said SwRI’s Dr. Thomas Greathouse, a co-author on this study. “Jupiter’s magnetospheric dynamics, the motion of charged particles within its magnetosphere, is largely controlled by Jupiter’s 10-hour rotation, the fastest in the solar system. The solar wind’s role is still debated.”

One of the goals of the Juno mission, recently approved by NASA for an extension until 2025, is to explore Jupiter’s magnetosphere by measuring its auroras with the UVS instrument. Previous observations with the Hubble Space Telescope and Juno have allowed scientists to determine that most of Jupiter’s powerful auroras are generated by internal processes, that is the motion of charged particles within the magnetosphere. However, on numerous occasions, UVS has detected a faint type of aurora, characterized by rings of emissions expanding rapidly with time.

“The high-latitude location of the rings indicates that the particles causing the emissions are coming from the distant Jovian magnetosphere, near its boundary with the solar wind,” said Bertrand Bonfond, a co-author on this study from Belgium’s Liège University. In this region, plasma from the solar wind often interacts with the Jovian plasma in a way that is thought to form “Kelvin-Helmholtz” instabilities. These phenomena occur when there are shear velocities, such as at the interface between two fluids moving at different speeds. Another potential candidate to produce the rings are dayside magnetic reconnection events, where oppositely directed Jovian and interplanetary magnetic fields converge, rearrange and reconnect.

Both of these processes are thought to generate particle beams that could travel along the Jovian magnetic field lines, to eventually precipitate and trigger the ring auroras on Jupiter.

“Although this study does not conclude what processes produce these features, the Juno extended mission will allow us to capture and study more of these faint transient events,” Hue said.

The Jet Propulsion Laboratory, a division of Caltech in Pasadena, California, manages the Juno mission for the principal investigator, Dr. Scott J. Bolton, of SwRI. Juno is part of NASA’s New Frontiers Program, which is managed at NASA’s Marshall Space Flight Center in Huntsville, Alabama, for the agency’s Science Mission Directorate in Washington. Lockheed Martin Space in Denver built and operates the spacecraft. 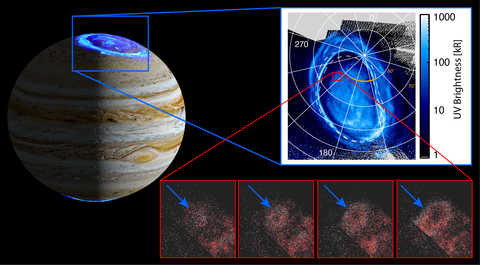