Scientists at Southwest Research Institute® (SwRI®) are part of a NASA-funded team developing an autonomous underwater probe to evaluate technology concepts that eventually may be used to search for life in the oceans of Jupiter's moon Europa.

The vehicle, called DEPTH-X for Deep Phreatic (pertaining to underwater rock formations) Thermal Explorer, was integrated and tested in Austin, Texas, by Stone Aerospace Inc., with funding from the NASA Advanced Science and Technology for Exploration of Planets program and the NASA Ames Research Center. Engineers and scientists from SwRI's Automation and Data Systems Division and Space Science and Engineering Division developed sensors, machine vision and sample-return technologies for the robot vehicle under contract with Stone Aerospace.

Before sending a mission to Jupiter's moon, however, the technologies for autonomous exploration, mapping and life detection are being developed and tested here on Earth.

DEPTH-X has undergone preliminary tests in above-ground tanks and also in lakes around Austin. Recent tests included exploring La Pilita, a 310 foot deep sinkhole located north of Tampico in the Mexican state of Tamaulipas. Later this spring it is to be sent to the bottom of a deep, water-filled sinkhole named Zacaton, also located north of Tampico. There, DEPTH-X will use its autonomous systems as it dives more than 1,500 feet to the bottom, gathers and analyzes samples along the way and then finds its way back to the surface.

If the Zacaton project succeeds, the next development step could be to send the probe into Lake Vostok in Antarctica, a body of water about the size of Lake Ontario but which has been sealed off from the outside world for thousands of years by an ice cap 2.5 miles thick.

Like the Antarctic lake, scientists believe Europa, about the size of Earth's moon, contains liquid-water oceans beneath an icy crust that is up to six miles thick. A robot vehicle based on technologies developed on DEPTH-X might be sent on some future mission to Europa, possibly around 2014, to penetrate the ice and explore the water beneath in search of microbial life.

"Except for the ice cover, extreme temperatures and remote distance, Zacaton contains many aspects of the challenging environment that will be encountered at Lake Vostok or Europa," said Dr. Ernest Franke, an Institute engineer in the SwRI Automation and Data Systems Division. "The deeper parts of Zacaton are completely unexplored and unmapped. The DEPTH-X team is developing new methods for autonomous navigation and mapping so the robot vehicle can explore the unknown three-dimensional world and safely return to the surface.

"We suspect that the depths of Zacaton contain microbial life, possibly including completely new species. DEPTH-X will use its sensors and analysis equipment to detect and characterize those freshwater organisms at currently unexplored depths. It will provide not only new knowledge about Zacaton but also a dress rehearsal for Vostok and, ultimately, for Europa,' Franke said.

Zacaton is believed to contain hydrothermal vents that would make human exploration extremely difficult. The deep cavern, with an unknown depth, may also contain underwater passages, rooms and other navigation hazards that an un-tethered, autonomous vehicle must avoid as it moves about in total darkness. 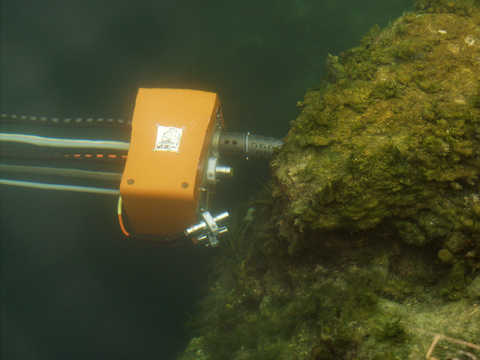