Viscosity refers to a fluid’s resistance to flow, usually measured in centipoise, cP. For liquids, viscosity corresponds to the informal notion of “thickness.” For example, honey has a higher viscosity than water.

Producing and transporting heavy crude oil and bitumen, a semisolid form of petroleum, is at least twice as capital- and energy-intensive as producing and transporting conventional oil2 due to high viscosity at reservoir conditions, as well as the presence of undesirable compounds. These characteristics make heavy crude oils difficult to produce, move by pipeline and refine.

Heavy and extra-heavy crude oils are thick and sludgy, so they resist flow through pipelines and are often transported by truck or rail, adding significant expense and introducing potential hazards. Pipeline transmission is also hindered by asphaltene and paraffin deposition, formation water and salt content, and corrosion issues.3 However, pipelines are widely regarded as the most attractive option for transporting crude oils. Pipeline transmission offers low costs and relatively low environmental impacts compared to other transport options that require loading and unloading oil in environmentally sensitive places. 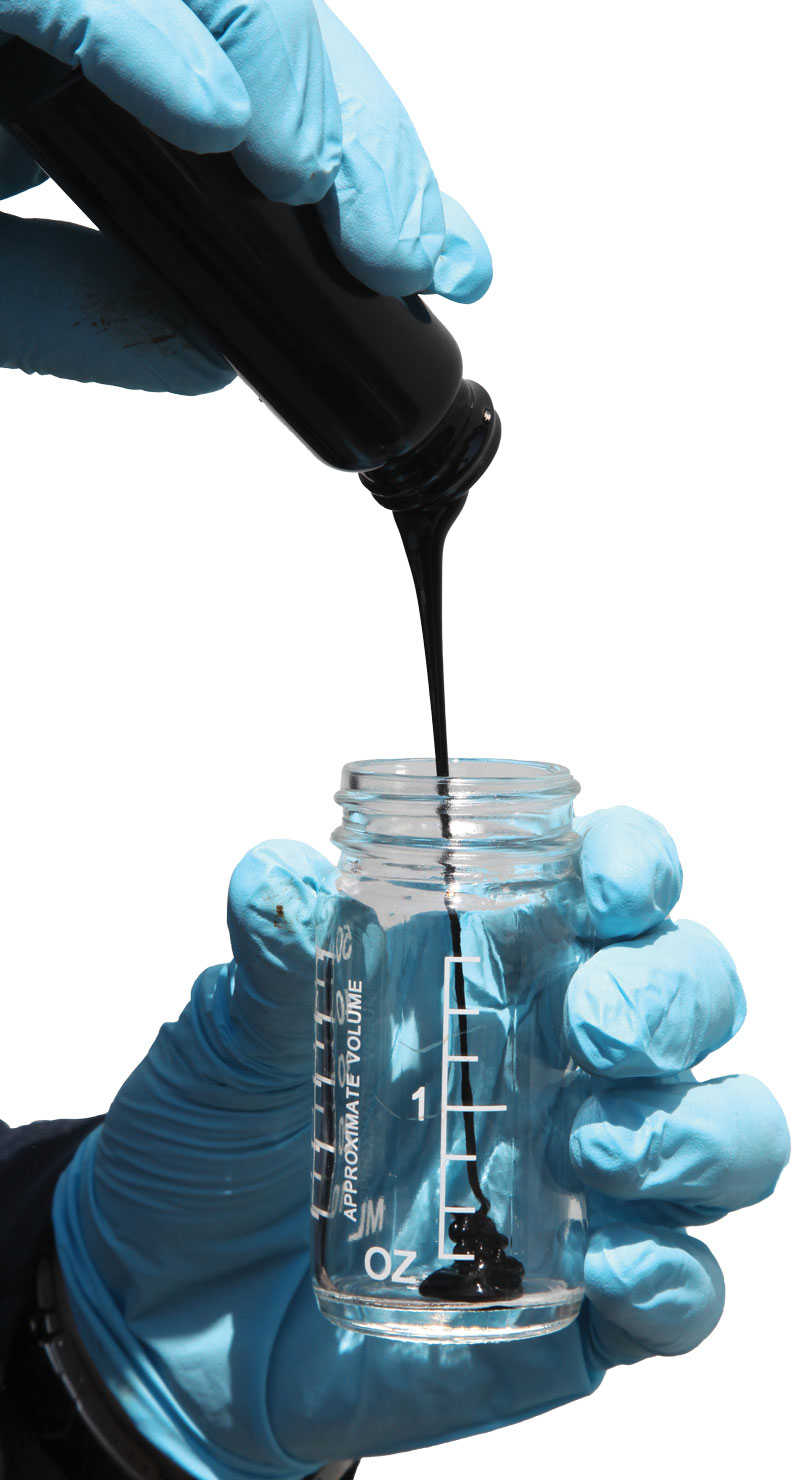 However, the technologies currently used to facilitate transport of heavy crudes are expensive, typically requiring various treatment techniques and tremendous energy resources in the form of heat. The heavy crude oil often requires multiple treatments simultaneously or the addition of large volumes of diluent to allow for pipeline transportation.

Non-pipeline transportation methods, such as rail or tanker trucks, are expensive, incurring fuel costs, transport maintenance and high potential for environmental impacts associated with exhaust emissions, derailment and collision risks. For example, air pollution and greenhouse gas costs associated with moving a fully loaded 100-car train of crude oil from North Dakota to the Gulf Coast are estimated to be about $150,000 one-way. The same transportation to the East Coast would cost about $210,000. The total estimated air pollution and greenhouse gas damages for oil shipped by rail from North Dakota in 2014 exceeded $420 million.5 And there are many other associated costs making current methods for transporting heavy crudes very expensive. A literature review of current heavy crude oil pipeline transportation technologies concluded that to continue the “increasing exploitation of heavy oil and bitumen, it is necessary to develop technology to aid in their transportation through pipelines.”2 Clearly new transport solutions are needed.

Asphaltenes, molecular substances in crude oil named for their asphalt-like properties, are used as paving materials on roads. Paraffin is a soft, colorless petroleum wax consisting of large hydrocarbon molecules. Bitumen is a sticky black, highly viscous liquid or semisolid form of petroleum.

Logistically, transporting heavy crude oil and bitumen via pipeline is challenging and often impossible considering the high density and viscosity (≥ 1,000 cP at 40°C) and very low mobility of the commodities at reservoir temperatures.2 These characteristics are associated with the precipitation of the asphaltene’s macromolecules and their subsequent aggregation in the oil, which contributes greatly to its pipeline flow resistance. The intermolecular forces between large, branched molecules and the tendency of the asphaltenes and paraffins to coalesce produces aggregates of heavy hydrocarbons. Those agglomerations can not only cause pipeline deposits and plugging, but also can structurally compress the oil and reduce its relative volume. That, in turn, increases the density of the heavy crude oil. These natural physical and chemical properties make heavy and extra-heavy crudes difficult to transport in general and very difficult to transport via pipeline over long distances. 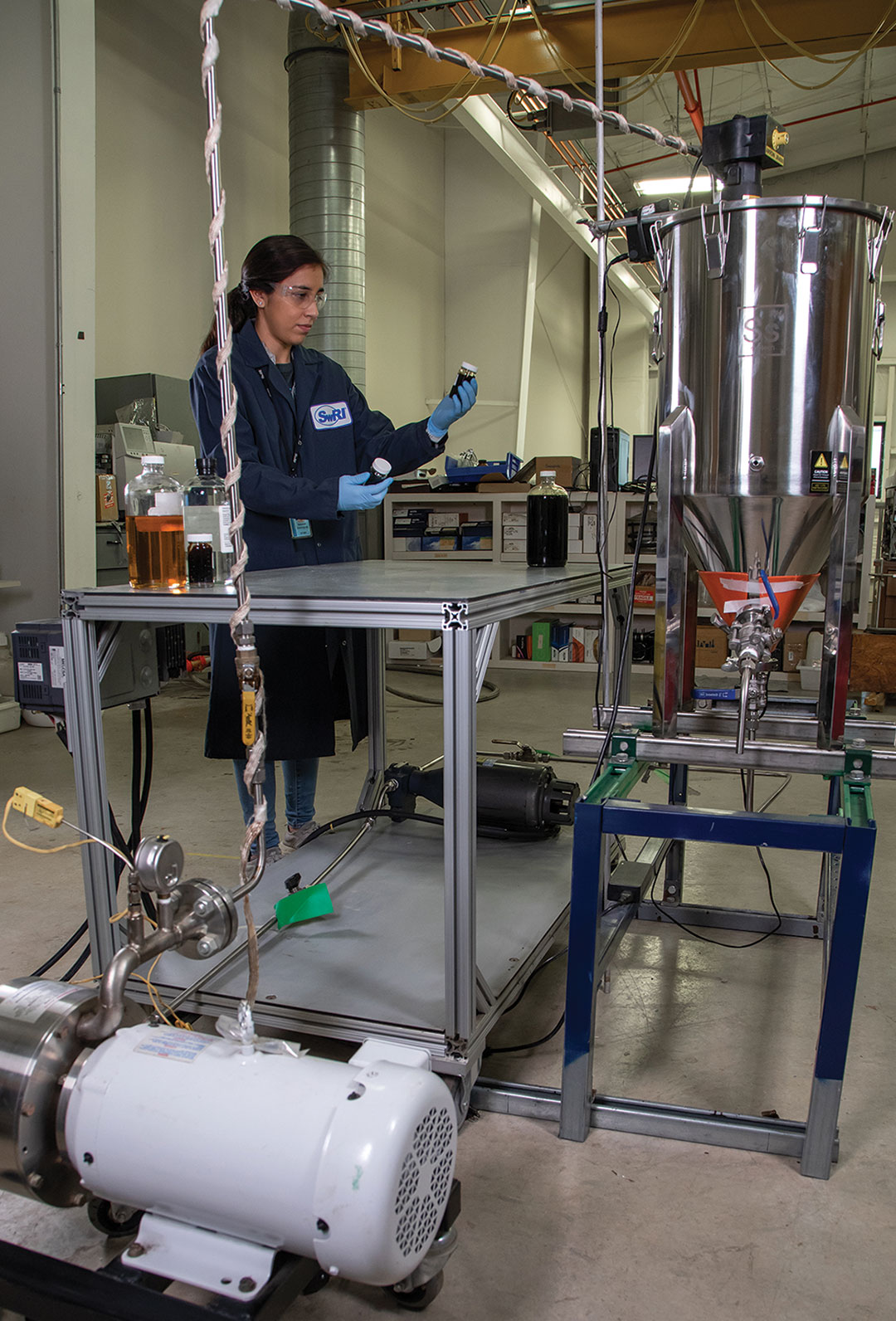 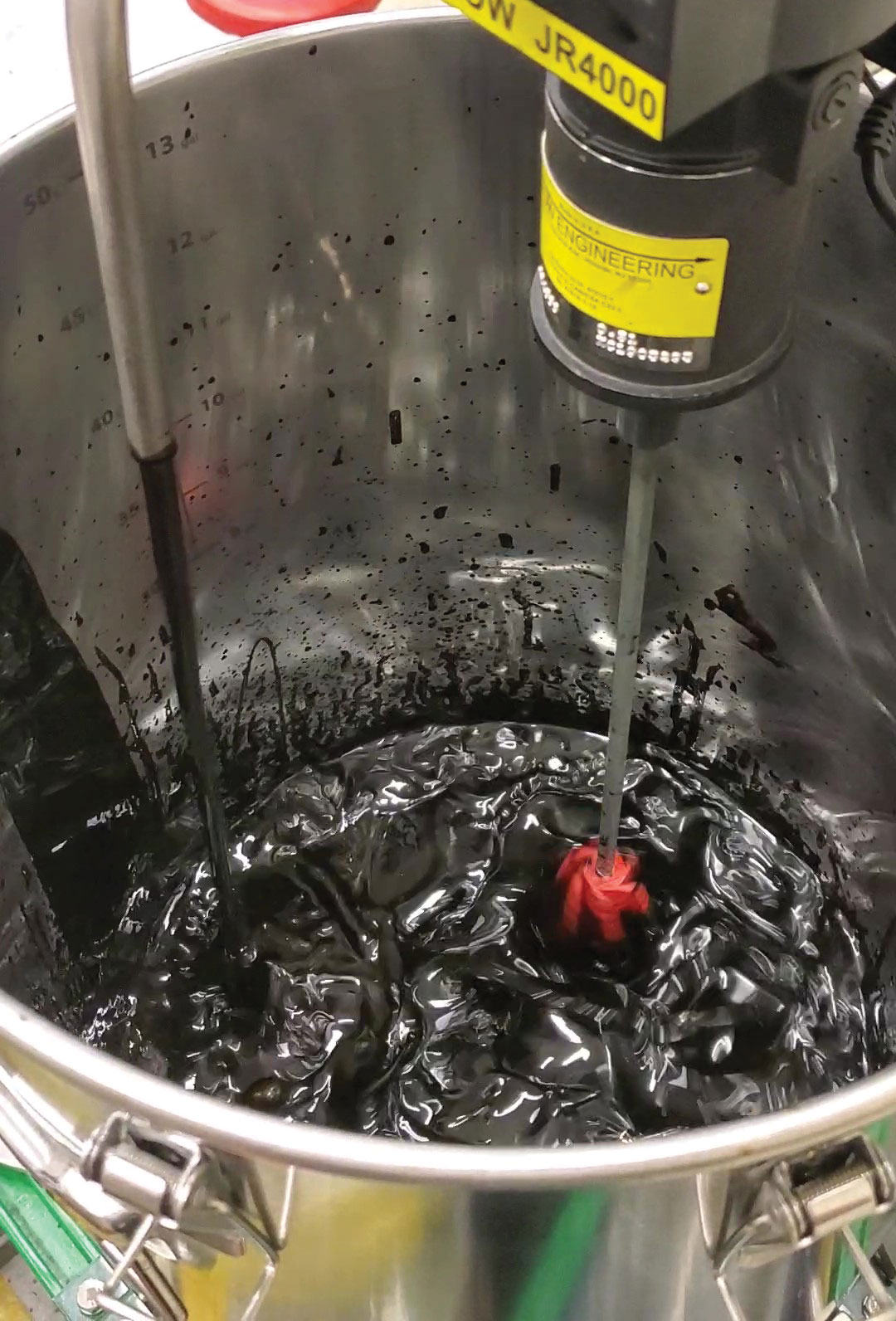 To demonstrate the EZ Flow process at a bench scale, chemists heated a heavy crude sample to 40°C in a stirred-stainless-steel, conical-bottom vessel while sequentially mixing low-concentration chemicals into the heavy crude oil.

When developing the EZ Flow process, SwRI chemists used bench-scale screening to determine the best candidate chemical formulations to treat heavy crude oil. The team then used the formulations with the most promising viscosity reduction potential at the bench scale in the pilot-scale system and optimized the chemical treatment of the heavy crude oil by incorporating hydrodynamic cavitation to homogenize the mixture. The hydrodynamic cavitation process froths the fluid, generating and imploding bubbles in a flowing liquid, which decreases and subsequently increases local pressures to enhance chemical reactions. Chemists considered the properties of the specific heavy material being treated when developing and testing chemical formulations.

Belridge heavy crude oil comes from one of the largest oil fields in the country, near Bakersfield, California. The field has been producing oil for more than a century, so the oil’s properties are well known.

SwRI selected Belridge heavy crude oil to demonstrate the EZ Flow process at a bench scale because its properties are well-documented, and it resembles many of the candidate oils targeted for this treatment. Chemists heated the sample to 40°C in a stirred-stainless-steel, conical-bottom vessel while sequentially mixing low-concentration chemicals into the heavy crude oil. They then circulated the sample through the hydrodynamic cavitation mixing device using a specified energy input. For the demonstration, the mixture was circulated in multiple passes. Chemists anticipate that a commercial unit would treat the heavy crude/chemical mixture in a single pass.

A key feature of the overall process is the low volume of added chemicals needed to reduce viscosity. These chemical additives included a water-dispersible mixture integrating an aromatic solvent, at least one base solvent, at least one liquid hydrocarbon and an organic solvent as well as an optional surfactant. Process optimization for various feeds may include additional chemical compounds or classes. 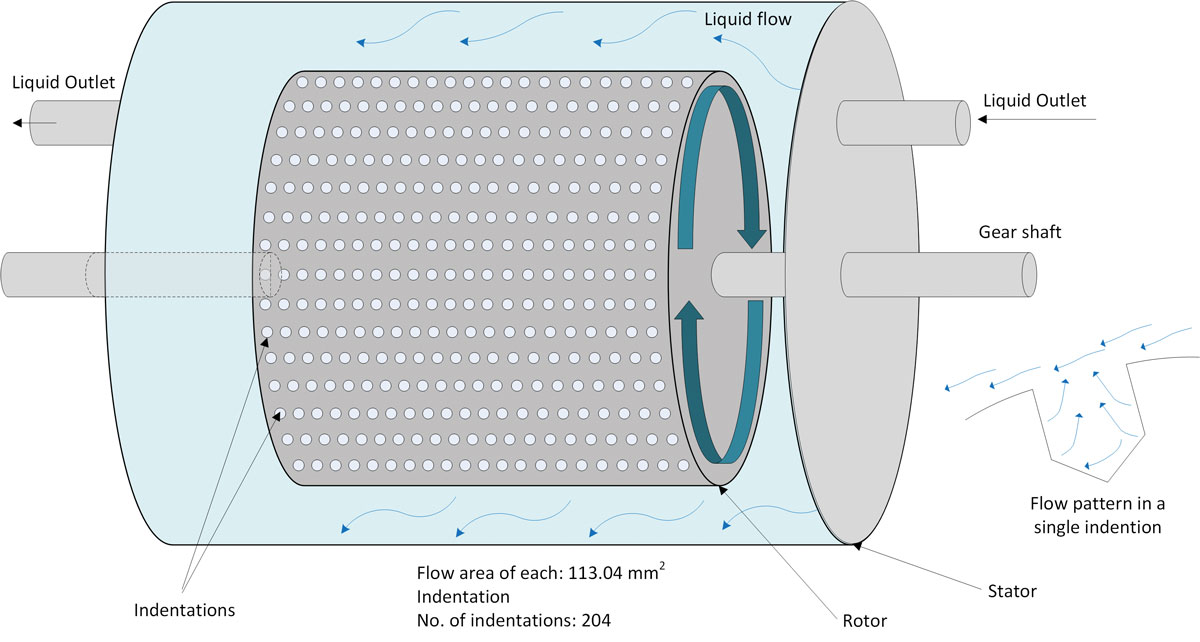 Treatment of Belridge heavy crude oil using the EZ Flow technology reduced kinematic viscosity at 40°C by 60% or more while using low concentrations of added chemicals — 2% or less — and less than 2% water. No heat is required after treatment, allowing for pipeline transportation of the treated heavy crude oil without further heating, dilution or chemical addition.

SwRI evaluated over 30 different chemical formulations during the screening process for the Belridge heavy crude oil treatment. Chemical formulations can be optimized for different feeds, bitumen, extra-heavy crude oil and other nonconventional heavy crudes. The results obtained to date have shown promise for the economic transportation of a variety of nonconventional heavy crudes by pipeline. The application of this technology to other heavy and extra-heavy materials seems promising.

The EZ Flow process reduces the intermolecular forces between and inside the agglomerates of the heavy crude oil, promoting dispersion vs. aggregation. The chemical and mechanical treatments of the heavy crude oil work together to reduce viscosity. Chemical additives reduce the interfacial tension in heavy crudes, while hydrodynamic cavitation (HC) provides enough energy to enhance the chemical reaction without requiring bulk heating to break up the aggregates and disperse the asphaltenes. The local thermal treatment does not need to raise the whole mass of oil to the target temperatures for disaggregation.

EZ Flow’s proprietary mixture of low-concentration chemical compounds optimizes the hydrodynamic cavitation of the heavy crude oil and can reduce heavy crude oil viscosity by over 60%. The similarities between EZ Flow formulations and refinery chemicals suggest that these formulations will not interfere with processes nor affect equipment at a refinery. In addition, the chemical formulation composition and hydrodynamic cavitation process can be optimized to lower the viscosity of different types of heavy and extra-heavy crude oils from different regions to make many unconventional crude oils suitable for transport through existing pipelines.

Other advantages of this process include lower costs of chemical additives and more environmentally friendly qualities. The process is not technically demanding, and treated oils can be stored for long periods of time without affecting the viscosity improvements. The process was designed to be scaled up to a commercially viable operation with low upfront and operational costs. In addition to reducing viscosity to allow for pipeline transportation, the EZ Flow technique could be used to upgrade heavy crude oil or possibly to enhance oil recovery. The changes created in the field will facilitate processing in the refinery and will not require special operations or processing.

According to API, the U.S. has more than 190,000 miles of liquid petroleum pipeline that deliver crude oils, including heavy crude oils, to refineries and chemical plants throughout the U.S. Transporting EZ Flow-treated heavy and extra-heavy crude oils over long distances by pipeline is estimated to be more cost-effective than using transportation methods, such as rail car or pipeline distribution of heavily diluted product.

Using the EZ Flow process to upgrade heavy crude oil will require further research and optimization but could produce significant benefits to the oil refining industry in addition to companies that transport the heavy crude oils. The research performed to date has been developmental, but the application of the technology to industry has the potential to change the dynamics of the unconventional crude oil market, bringing transportation costs more in line with those of conventional crude oil. In the next phase of research, chemical engineers will evaluate client-specific applications as well as scale up the EZ Flow process.

ABOUT THE LEAD AUTHOR

James Wood is a chemist, microbiologist and project manager. He has performed research and development at SwRI for 16 years. Wood has been published in over 20 technical journals, magazines or national conference proceedings in the fields of engineering, chemistry, microbiology and environmental science. 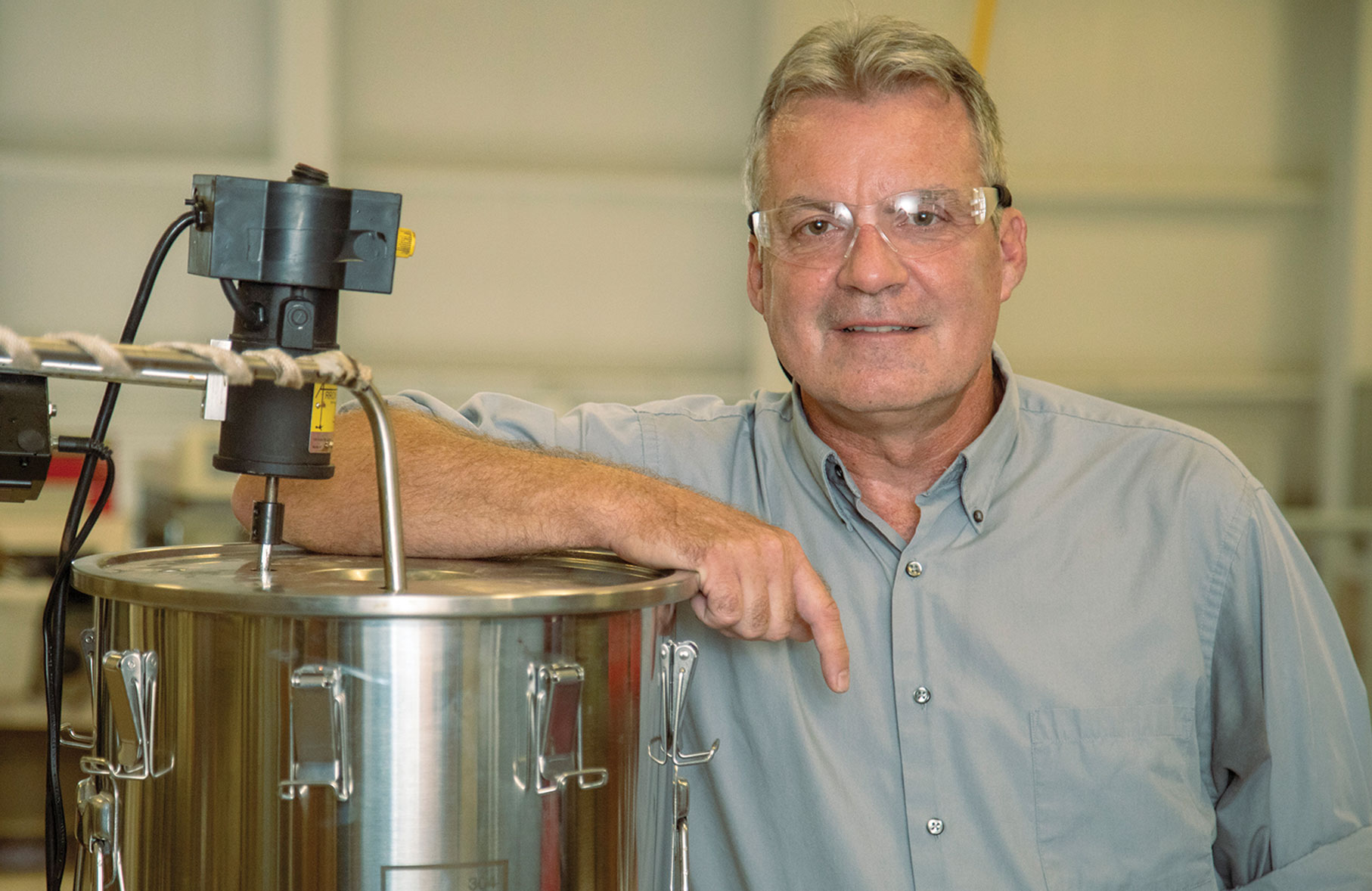