According to the preeminent international materials science organization, the economic effects of corrosion and wear cost the U.S. hundreds of billions of dollars a year and affect almost every industry, from transportation and energy to computers and textiles. A simple coat of paint can protect everyday objects from rusting, but today’s specialized infrastructure, components and products require something more complex.

When developing these items, metals are a desirable material because they are very hard and tough, but they are also susceptible to wear, corrosion and corrosion-induced cracking. Ceramics are also hard and corrosion-resistant, but they are brittle and prone to fracture. Materials scientists look for ways to impart the best properties of one material onto another to improve a component’s performance and durability. Some of this work has resulted in advanced coatings, thin films and engineered surfaces to enhance hardness, toughness and corrosion resistance of materials, and low-friction coatings to enhance motion, lower operating temperatures and reduce wear. 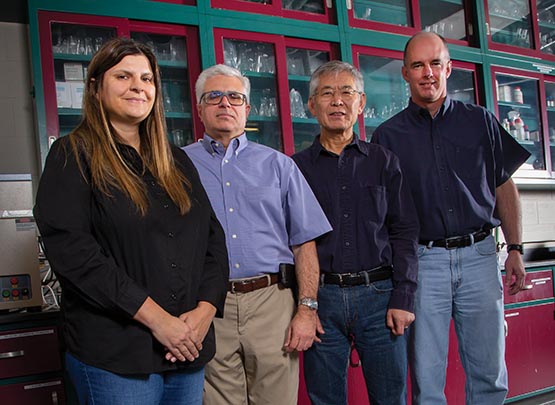 However, the traditional processes for applying these coatings can damage a material’s substrate by subjecting it to very high temperatures and/or low pressures. Additionally, the list of objects that can benefit from these coatings is limited to those that fit in a vacuum chamber. That’s why Southwest Research Institute has developed an innovative new process to apply coating under ambient conditions.

SwRI has been advancing surface modification technologies for more than 35 years. More than 4,000 square feet of materials science laboratory facilities house 20 vacuum chambers to deposit layers of material, atom-by-atom or molecule- by-molecule, onto a solid surface. Inside these chambers, protective materials called precursors are deposited onto the target material, or substrate, amid a vapor or plasma environment, where they condense onto the substrate as thin films.

For example, SwRI scientists have studied diamond-like carbon (DLC) films using various processes including plasma immersion ion deposition (PIID) to create coatings that are both very hard and very durable. Material scientists also have studied nanocomposite films, which are deposited using a plasma-enhanced magnetron sputter (PEMS) process. Through these efforts, SwRI has established itself as a leader in surface engineering research by developing new coating technologies for government and industry clients.

Plasma — along with solid, liquid and gas — is one of the four fundamental states of matter. Plasmas are made up of charged or ionized particles and exhibit properties of both a liquid and a gas. They can be created by subjecting a neutral gas to heat, pressure and/or a strong electromagnetic field.

Although vacuum-based coating processes can achieve high quality, performing the process inside a vacuum chamber is cumbersome and limiting. For example, vacuum deposition is impossible for large structures such as an aircraft wing or a ship impeller. In addition, some substrates, such as biological materials or soft polymers, are incompatible with vacuum conditions. These applications require a process that works in atmospheric pressures, outside a vacuum chamber.

Over the past five years, SwRI scientists have moved beyond the vacuum chamber, developing expertise in depositing coatings using plasmas at atmospheric pressure. For instance, the SwRI-developed High Power Impulse Plasma Source (HiPIPS) technique was recognized in 2017 by R&D Magazine as one of the top 100 inventions of the year. This process allows for enhanced surface modification and deposition of functional coatings without a vacuum. HiPIPS provides an unparalleled plasma processing space of very high density and flux — indicators of coating quality and efficiency — at low-temperature and atmospheric pressure conditions. HiPIPS’ unique abilities open the door for new surface engineering applications and unprecedented coating/substrate combinations. 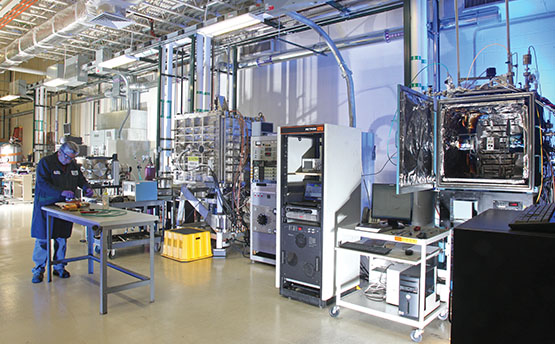 With more than 4,000 square feet of materials science laboratory facilities including 20 vacuum chambers, SwRI develops various techniques to deposit thin films on solid surfaces. These coatings increase the hardness and wear resistance of components to extend their service life. 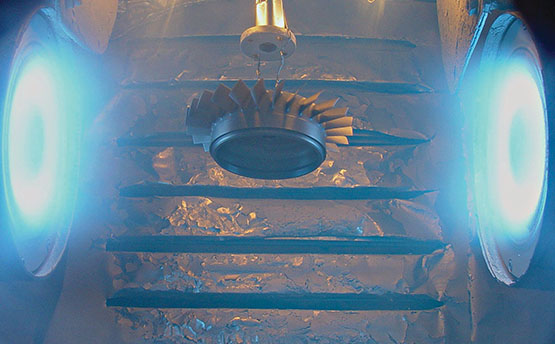 By breaking free of the vacuum chamber, HiPIPS offers virtually unlimited surface engineering applications. It not only outperforms other ambient pressure plasma processes, but also rivals the effectiveness of vacuum plasma systems. The SwRI team developed techniques to discharge a dense plasma with increased ionization for advanced surface modification and coating deposition. To do this, HiPIPS uses high-power pulsed direct current (DC) generators. The high-power pulses control ionization and fragmentation of chemical precursors in the plasma phase. Enhancing ionization and dissociation enables new precursor chemistries, which could improve the functionality of coatings.

Plasma-enhanced chemical vapor deposition (PECVD) is a common method for materials synthesis, surface engineering and thin film deposition. In conventional CVD, electrical energy (such as microwave or radio frequency) excites a gaseous feedstock under vacuum conditions to create a stable mixture of reactive species, such as radicals, ions, electrons and neutrals. The electron and radical/ion temperatures in these hot plasmas are in equilibrium and typically exceed 1,500 degrees C. Although PECVD is widely used, its temperature extremes, combined with the vacuum environment, dramatically limit the type, shape and size of substrate candidates.

Over the past two decades, several atmospheric-pressure plasma discharge schemes have addressed these limitations. So-called cold plasmas are characterized by electron temperatures much greater than that of the ions, neutrals and gas. While these systems have expanded the plasma toolkit, they too are limited in terms of practical application. For example, some small-scale academic studies have demonstrated thin film deposition with these systems, but most atmospheric-pressure plasma jets are used to clean surfaces or modify surface wettability. Despite some successes in this field, significant technical challenges remain, including precursor non-homogeneity, electrical arcing and/or extinguishing. As a result, ambient pressure plasmas are typically run with a predominantly inert feedstock gas and relatively low fractions of simple reactive gases, at fluxes several orders of magnitude lower than conventional hot vacuum plasmas. 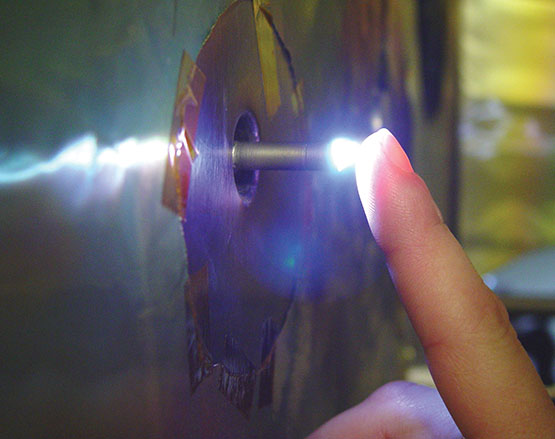 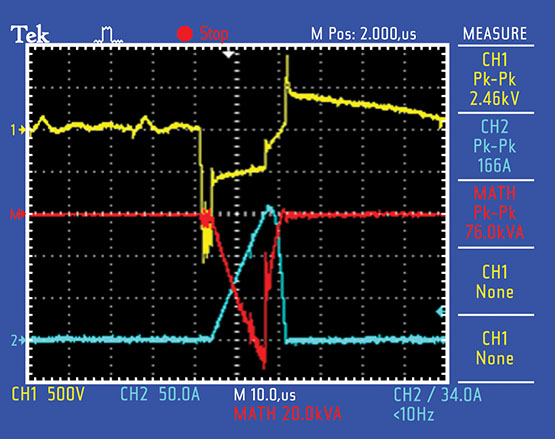 Breaking Up is Hard to Do

To overcome these challenges, SwRI recognized and exploited recent innovations in high-power pulsed DC power supplies, commonly used with magnetrons, to develop an advanced atmospheric-pressure plasma jet. This application creates peak power densities and currents that are two to three orders of magnitude higher than cold-plasma jets driven by radio-frequency or AC electricity sources. HiPIPS uses variable-pressure plasma jets with high-power pulsed DC generators that supply extremely high power density in short pulses. When gas precursors are fed into the plasma source and a negative, high-voltage DC pulse is applied to the electrode, the electric current flows through the gaseous medium as electrons. The free electrons are accelerated and collide with gas molecules, breaking them up to create reactive species. As the DC pulse continues, the electric current increases dramatically. Because of the high current capability of the advanced power supply design, extremely high power quickly excites the plasma. This high-power discharge produces highly ionized gases as well as an abundance of radicals. While the pulsed discharge quickly approaches an arc state, controlling the pulse length dampens arcing, allowing for continuous stable operation.

SwRI further expanded HiPIPS’ applicability to include new precursors and processing conditions. When it comes to depositing functional coatings, HiPIPS technology holds a critical advantage in its ability to provide plasma treatments unsuitable for conventional atmospheric plasma processes. Its controlled high-impulse power determines how chemical precursors are ionized and fragmented in the plasma phase. This control allows engineers to tailor the process chemistry involved to produce the desired coating property. SwRI has used HiPIPS precursors ranging from inert gases and molecular gases to liquids and solids, including methane, hydrogen, nitrogen, oxygen, carbon monoxide and organosilicon compounds. These precursors can be used alone or in combination with each other and/or with inert gases such as argon. SwRI designed a variation of HiPIPS that uses two concentric electrodes and a wire feedstock to deposit metallic coatings at ambient conditions. 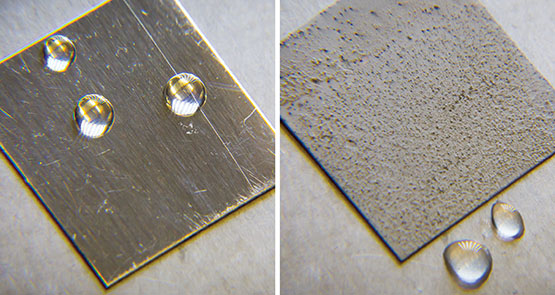 Using HiPIPS, SwRI has developed durable, superhydrophobic (water repelling) coatings to reduce drag on aerospace materials and components. The left image is uncoated, while the right image has been treated with the hydrophobic coating. 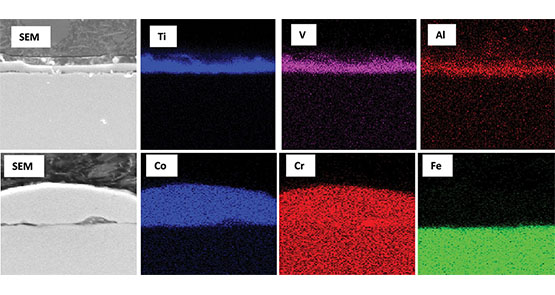 While HiPIPS is still in the demonstration phase, the potential range of applications for the technology is practically unlimited. The technology is currently undergoing further development for optimization and scale-up. HiPIPS deposits a variety of films and performs various surface treatments, including surface modification, cleaning and etching.

The HiPIPs system is portable and versatile, deployable in a a range of locations. SwRI is designing a miniaturized HiPIPS system for use on the International Space Station’s crystallization module to create ultra-pure materials with novel properties. SwRI is also conducting a paper feasibility study with the National Energy Technology Laboratory to evaluate using HiPIPS technology to create a conductive fluid for magnetohydrodynamic power generation technology. The technique would eliminate the need for potentially hazardous reactive seed alkali metals. Altogether, HiPIPS is poised to revolutionize the surface engineering field, creating environmentally friendly techniques to protect equipment, large and small, affecting nearly every industry and individual.

Check out this video about the HiPIPS system.