Roadways are an important part of transportation infrastructure, serving as a backbone for the movement of people and goods. Despite increasing traffic volumes, the funding available for maintaining roadways, improving public transit services, and upgrading or replacing passive traffic control systems is not keeping up with usage. The lack of signalized intersections and active signage, especially in rural areas, is the main cause of major crashes and fatalities. Rural roads account for 70 percent of the nation’s road miles and 40 percent of vehicle miles traveled. Despite only serving 19 percent of the U.S. population, rural roads and intersections account for 54 percent of all fatalities, which is 2.4 times greater than the fatality rate in urban areas. It was reported in 2016 that there were 72,732 crashes with 408 fatalities at intersections within areas populated by fewer than 100,000 people. The cost per death is $10,760,000 which means a total economic loss of $4,390,080,000.

In view of declining resources and the need for active signage and warning systems, the challenge is to develop innovative smart technologies for monitoring roadways and collecting traffic data. The need for such technology is made more acute with the future growth of autonomous (i.e., self-driving) vehicles and the spread of vehicle-to-infrastructure (V2I) communications that will improve roadway safety and reduce accidents. The technology we are proposing can reduce highway deaths while supplying increased information about the usage and condition of our rural roadways.

Figure 1. The sensor and solar panel in a demo installation on the UTSA campus. 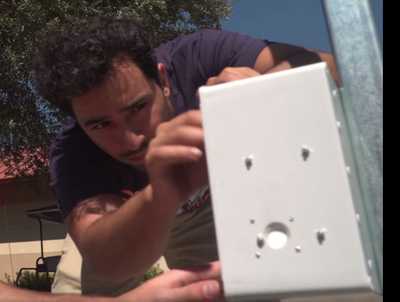 Our team looked at the problem of dangerous intersections on rural highways and thought there was a role for smart sensors to play in reducing the danger involved in negotiating these typically unlit intersections. We designed a smart sensor and sign system consisting of one sensor, transmitter, and one receiver/sign per lane approaching an intersection. The system makes the intersection safer by alerting a driver to the upcoming intersection and flashing a “stop” sign if appropriate for the lane.

The smart aspects of this system are that:

Our primary emphasis was on reducing power consumption rather than using existing technologies like video cameras. We accomplished this with LED lamps, a low-power infrared (IR) sensor, and efficient low-power RF signaling.

For a low-power system, the selection of sensors and power source are essential to the design. We initiated the design with two low-power sensors as candidates (radar and infrared) and the goal of running the system using thermal energy from the pavement. The UTSA team evaluated sensors and down-selected to the IR sensor, while the SwRI team ran a simulation of thermoelectric energy harvesting from the pavement. The result of the energy harvesting evaluation was that a square foot of pavement could support 1 mW of steady-state system power consumption in most areas of the U.S., with southern states like Arizona and Texas capable of 1.4 mW. This was considerably less than the sensor and sign electronics required at the current state of development, so the power source for the system was changed to solar. The system was developed to work on an 8” x 12” solar panel mounted on top of a pole.

UTSA professors Ahmed and Dessouky obtained permission from the UTSA administration to test the system at the UTSA 1604 campus, and tests were run for three days and nights with data logging. Using the infrared sensor to detect approaching cars and flash the sign, a detection accuracy of 91 percent was obtained, averaged over all types of vehicles during night and day. In addition to detecting vehicles, the system was able to calculate the velocity of the approaching vehicle and classify it as a car or truck. Classification according to the number of axles may be possible with improvements to the system sampling rate.

The system consumes about 120 mW as developed, but power consumption was found to be dominated by the microprocessor that was included with the sensor evaluation kit. A bottom-up redesign with an Arduino microprocessor could reduce this to around 20 mW and improve the sampling rate. Further improvements in power consumption could be realized by putting the system to sleep part of the time, which would bring the power requirements down to the level that can be generated by thermal energy from the pavement.