Using Geochemical and Periphyton Analyses to Discern Impact of Effluent on Edwards Plateau and Hill Country Streams and Rivers, 15-R6031

The Edwards Plateau and the Texas Hill Country are experiencing serious challenges due to stresses imposed on the region’s water resources. Some of the greatest risks to these resources come from the discharge of effluent generated by communities located in the watersheds. Effluent can be generated from various wastewater-disposal facilities, for example: on-site sewage facilities (OSSF), Texas Land Application Permit (TLAP) facilities, and Texas Pollutant Discharge Elimination System (TPDES) facilities. The relative impacts from each type of wastewater-disposal facility on the karst and surface-water systems of the Edwards Plateau and the Texas Hill Country have not been quantified. As a result, a spirited debate is underway in which developers claim that centralized wastewater-disposal facilities (i.e., TLAP or TPDES) have less impact on the ecosystem than do OSSFs. The opposing view is that less dense development that relies on OSSFs for wastewater disposal has less impact on the health of surface-water resources. Analysis of surface-water chemistry is the common approach to assess the health of the surface-water environment, but recent technical advances suggest that the collection and sampling of periphyton—the community of organisms attached to underwater surfaces such as plants and streambed rocks—can be a more nuanced indicator of surface-water quality, due to their nature as bio-accumulators of nutrients and other constituents. Previous studies have indicated that periphyton are excellent indicators of the trophic state of surface-water bodies, but their application in the examination of wastewater impacts on karst, semi-arid, and sub-humid watersheds has been limited. 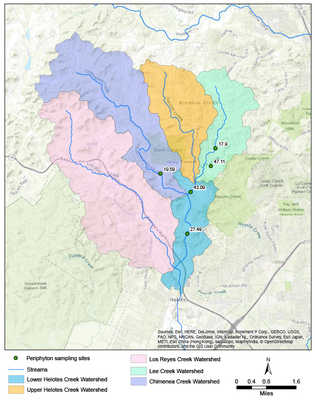 Data regarding wastewater facility locations, water chemistry, periphyton, and seston were collected to discern the potential relationships between wastewater disposal, surface-water quality, and periphyton. The main goal was to determine the viability of using periphyton data versus water-chemistry analyses to constrain the trophic state of streams. After completing the data collection, two field sites were selected as case studies for sampling and gaining a deeper understanding of potential links between wastewater disposal, water quality, and periphyton.

The collected data were successfully compiled in the form of an ArcGIS geodatabase, with shapefiles for different wastewater facilities, water chemistry, periphyton, and seston. Many counties either lacked accessible septic system data or were unable to provide such data due to ramifications of the COVID-19 pandemic. As a result, using two field sites as case studies proved especially important. The project team conducted water-chemistry, periphyton, and seston sampling along a segment of San Geronimo Creek in Medina County. The samples were sent to labs for analyses. The San Geronimo Creek results were used in conjunction with results from previous sampling campaigns in the Helotes Creek watershed of northwestern Bexar County. 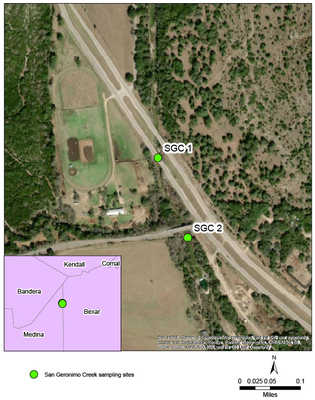 The Helotes Creek watershed is dominated by septic systems, whereas the San Geronimo Creek segment was near reported sewage outflows. The differences in wastewater treatment and disposal practices at the two sites were thus beneficial towards providing a preliminary look at the viability of periphyton for supporting conventional water-chemistry analyses in examining the potential impacts of wastewater on surface-water trophic states. At both locations, concentrations of nutrients (i.e., nitrogen and phosphorus) in surface-water samples were near or below detection concentrations. However, values for periphyton and seston clearly detected and measured the level of degradation in the creeks. Additional sampling events to repeat periphyton and seston analyses can confirm if these trends are persistent and statistically significant or if seasonal deviations occur.