Southwest Research Institute is home to one of the nation’s leading space science and engineering programs, emphasizing both fundamental research and innovative technology. For more than 30 years, our program has advanced from conducting research to building payload instruments and electronics, to eventually leading entire NASA missions and now building spacecraft.

This year marked success in a new facet of our program: seeing the first SwRI-built spacecraft return important new Earth science data. The Cyclone Global Navigation Satellite System (CYGNSS), a constellation of eight microsatellites, is now collecting data that allow us to infer hurricane wind speeds at the ocean surface. The data will be integrated into models to better understand and predict how hurricanes intensify, a critical factor that has lagged behind landfall predictions. 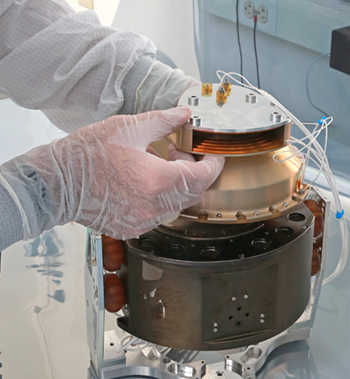 SwRI scientists and engineers developed the Heavy Ion Sensor, which will measure particles in the solar wind from aboard ESA’s Solar Orbiter. When completely assembled, the instrument will be sheathed in thermal material for its close approach to the Sun.

An SwRI-led mission imaged the Sun’s corona from aboard two NASA research aircraft, using the summer’s solar eclipse to block the intense glare of the Sun and visualize more detail in the weaker coronal emissions.

A new heliophysics mission based on the CYGNSS microsatellite array is under conceptual design. SwRI’s “Polarimeter to Unify the Corona and Heliosphere,” known as PUNCH, employs a constellation of four desk-sized satellites that will orbit the Earth in formation to study how the Sun’s atmosphere, or corona, connects with the interplanetary medium.

In its third year of operations, the SwRI-led Magnetospheric Multiscale (MMS) mission continues making a steady stream of discoveries about magnetic reconnection, a powerful process seen throughout the universe. In the first two years, MMS observations have been published in over 400 peer-reviewed publications.

Even as New Horizons hurtles toward its Kuiper Belt flyby in 2019, SwRI was selected to lead Lucy, NASA’s first mission to the Trojan asteroids. The spacecraft, scheduled to launch in 2021, will study six of these primitive objects orbiting in tandem with Jupiter.

The SwRI-led Juno mission is making new discoveries from its first-ever polar orbit about the largest planet in the solar system. Every 53 days, Juno swings in close to the gas giant, collecting science about Jupiter’s interior structure, atmosphere and magnetosphere. Two SwRI-led instruments are working in concert to study the Jovian auroras, the most spectacular in the solar system.

Space facilities under construction include a state-of-the-art laboratory that simulates planetary surfaces and the “COSMIC” calibration chamber. The first will investigate why Pluto’s moon Charon has a red pole and how Jupiter’s moon Europa forms its tenuous atmosphere. Engineers will use COSMIC to calibrate the SwRI-developed MASPEX™ instrument, the most precise space-borne mass spectrometer to date, scheduled to fly on NASA’s Europa Clipper mission. SwRI is also the prime contractor developing OCTOCAM, a next-generation astronomical instrument to improve data collected by the 8-meter Gemini South telescope in Chile.

Closer to home, Earth scientists expand our understanding of critical natural resources, including petroleum and water. This year, SwRI launched a new joint industry project focused on enhancing production in Permian Basin shale oil reservoirs. Water quality and availability remains an important global and local concern. Our latest research linked groundwater in a Texas aquifer to the surface flows in one of the state’s most pristine rivers.