SwRI is home to principal investigators of four pioneering NASA missions. These include two planetary programs in progress — the Juno mission to Jupiter, now halfway through its primary mission — and New Horizons, which followed up its dramatic Pluto encounter with a flyby of Kuiper Belt object 2014 MU69 on January 1, 2019. A third planetary mission will encounter multiple Trojan asteroids for the first time. The Lucy spacecraft is scheduled to launch in 2021 to study some of the most ancient objects in the solar system. The Magnetospheric Multiscale mission was extended in 2018 to continue the steady stream of discoveries about magnetic reconnection, explosive phenomena seen throughout the universe, studied on an electron scale in the near-Earth environment.

For Project ESPRESSO, SwRI flew a specialized, small-scale vacuum chamber at zero gravity to test technology for exploring low-gravity, airless worlds. We demonstrated miniature grapples for nano-scale landers designed to collect samples from bodies such as the Moon and asteroids.

In the space engineering arena, progress continues on SCORPIO, an eight-channel imager and spectrograph designed to complement the 8-meter Gemini South telescope in Chile. SCORPIO will allow scientists to observe the whole universe — from exploding stars to black holes and exoplanets — with unparalleled sensitivity.

The latest versions of SwRI’s Ultraviolet Spectrograph (UVS) are slated to fly on two upcoming missions to the Jupiter system. The UVS instruments will study the surface and thin exospheres of Jupiter’s icy moons. After final calibrations, JUICE-UVS will ship to France next summer for integration into the European Space Agency’s JUpiter ICy moons Explorer spacecraft, scheduled to launch in 2022. Europa-UVS, slated to fly on NASA’s Europa mission, begins fabrication in 2019. The Europa Clipper, scheduled to launch in 2023, will also host SwRI’s ultra-sensitive MAss Spectrometer for Planetary EXploration (MASPEX).

Space scientists are developing PUNCH, a proposed Polarimeter to UNify the Corona and Heliosphere mission to observe the “no-man’s land” between the outer solar corona and the solar wind. SwRI prototyped a wide-field imager for the mission and will host a NASA site visit in early 2019 for the mission evaluation phase of the project. 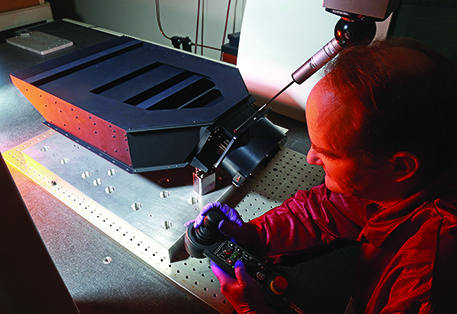 SwRI prototyped this Wide Field Imager for the proposed PUNCH mission. The dark baffles in the top recess allow the instrument to image objects a thousand times fainter than the Milky Way.

Our solar system formation specialists advance evolution models using the latest scientific data, while astronomers look beyond, studying other stars and their planetary systems and what they tell us about our place in the universe.