SwRI is home to principal investigators for five active NASA missions, including the Polarimeter to UNify the Corona and Heliosphere (PUNCH), Magnetospheric Multiscale (MMS), Juno, New Horizons and Lucy missions.

PUNCH, which is scheduled to launch four microsatellites into polar orbit in 2023, will image the region where the Sun’s outer atmosphere transitions to create the solar wind, a supersonic stream of particles that fills the Solar System. MMS is continuing its study of magnetic processes that drive auroras and other energetic events in the Earth’s magnetosphere, while New Horizons journeys across the Kuiper Belt as the mission team searches for another possible flyby target. The Juno mission to Jupiter is on the home stretch of its primary mission. The spacecraft and its instruments remain healthy, paving the way to a possible mission extension with an additional focus on Jupiter’s moons.

The Lucy team is integrating instruments with the spacecraft in anticipation of an October 2021 launch, beginning a 4-billion-mile journey to explore the Trojan asteroids, a population of ancient small bodies that share an orbit with Jupiter. Lucy will fly by seven of the Trojan asteroids, plus a main belt asteroid, allowing it to survey the diversity of this population in a first-ever, record-breaking mission.

Engineers continue to develop and promote advanced avionics and processing capabilities for spacecraft in Earth-orbit and deep space applications, including providing the Rendezvous and Docking Avionics for the Mission Extension Vehicle-1. Our system played a crucial role in a historical first, when two commercial satellites docked in orbit to extend the service life of a satellite running low on fuel. 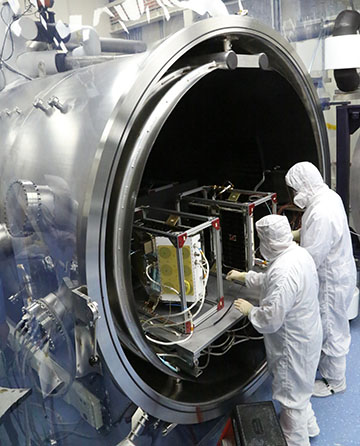 In 2020, an evolution of the CYGNSS suitcase-sized satellites, shown here under test, was added to NASA’s Rapid Spacecraft Development Office IV catalog used by the U.S. government to easily contract for proven spacecraft. 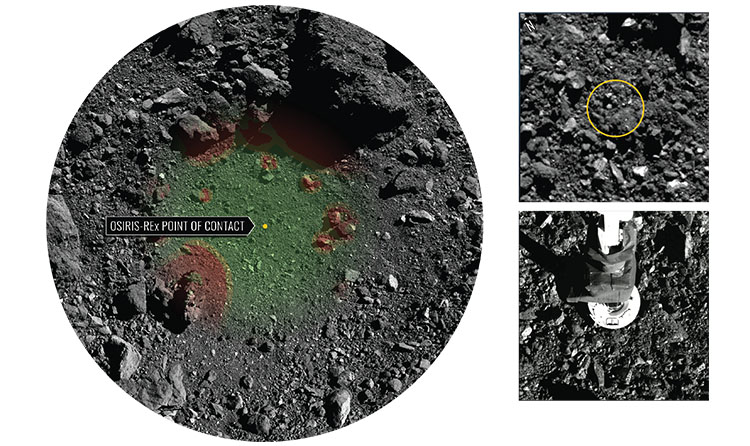 Images Courtesy of NASA/University of Arizona

SwRI scientists helped select the location for NASA’s successful sample collection feat from the surface of asteroid Bennu. We also used OSIRIS-REx data to understand more about the near-Earth asteroid’s history and makeup. The asteroid sample will return to Earth in 2023.

SwRI space scientists and engineers designed, built and delivered the Ultraviolet Spectrograph (UVS) for the European Space Agency’s JUICE mission to Jupiter. They are also developing the UVS and MAss Spectrometer for Planetary EXploration (MASPEX) instruments for NASA’s Europa Clipper mission as well as scientific instruments for various solar-related missions. Scientists also support various asteroid and lunar investigations as well as research and modeling of Solar System and planetary formation.

In 2020, SwRI developed advanced machine learning and artificial intelligence algorithms with the potential to substantially reduce space mission costs by optimizing the data stream transmitted back to Earth while enhancing how distant spacecraft interpret sensor data and independently respond to changing conditions.

SwRI continues its long history of solving liquid propellent challenges for the launch vehicle industry. In 2020, we helped the commercial space industry solve problems with slosh dynamics, liquid acquisition devices and tank pressurization systems. In addition to certifying equipment that avoids potentially devastating pulsation interactions between the propellant system and the launch vehicle structure, we have improved models that predict propellant temperature throughout the tank. With this, engineers can better predict liquid hydrogen boil-off to improve tank pressurization controls throughout the mission.