In addition to investigating space phenomena and developing payload instruments, electronics and spacecraft, SwRI scientists lead missions to explore the cosmos, including the Lucy mission, the first mission to Jupiter’s Trojan asteroids, which launched in October 2021 (see inside cover). SwRI is home to principal investigators of four other current NASA missions, including the Polarimeter to UNify the Corona and Heliosphere (PUNCH), Magnetospheric Multiscale (MMS), Juno and New Horizons. In 2021, NASA extended the Juno mission to Jupiter until September 2025. The PUNCH team demonstrated the Institute-developed Wide Field Imager, which will fly on three of the mission’s four SwRI-built smallsats, finding that it met its imaging requirements, attenuating sunlight to image the Sun’s outer corona in the eternal noontime of space.

Space scientists are also developing a Medium-Class Explorers mission to study the Sun’s poles, which are considered among the last unexplored regions of the solar system. Solaris will image the Sun’s poles from high latitudes to help scientists understand how polar magnetic fields and flows shape the solar activity cycle.

SwRI is also finalizing production of two instruments — the Mass Spectrometer for Planetary Exploration (MASPEX) and the latest generation of the Ultraviolet Spectrograph (UVS) — for NASA’s Europa Clipper mission. The spacecraft will orbit Jupiter and perform multiple flybys of the moon to characterize the habitability of its internal ocean. To meet NASA’s planetary protection requirements, SwRI microbiologists are testing the instruments for microbial contaminants to avoid carrying terrestrial organisms and organic materials to other worlds.

In 2021, SwRI acquired the parts for SCORPIO, a Spectrograph and Camera for Observations of Rapid Phenomena in the Infrared and Optical for the Gemini South Observatory in Chile, and began the assembly, integration and verification phase. SCORPIO’s eight independent arms will offer diverse groundbreaking observations from trans-Neptunian objects and centaurs within the solar system and to exoplanets, neutron stars, supernovae and gamma-ray bursts beyond.

To advance understanding of Earth’s nearest neighbor, NASA has selected three new lunar investigations, including a payload suite led by SwRI. The Lunar Interior Temperature and Materials Suite (LITMS) is one of two packages that will land on the far side of the Moon, a first for NASA, as part of the agency’s Commercial Lunar Payload Services, or CLPS, initiative.

Specialists in the bombardment history of the Earth have modeled evolutionary processes in the main asteroid belt and discovered that impactors such as the one that ended the reign of the dinosaurs 66 million years ago likely came from the outer half of the main asteroid belt between Mars and Jupiter. The team also discovered that these events happened 10 times more often than previously thought. SwRI scientists also updated bombardment models with the latest geologic evidence of ancient large collisions and demonstrated how these impacts may have delayed the development of life on Earth. 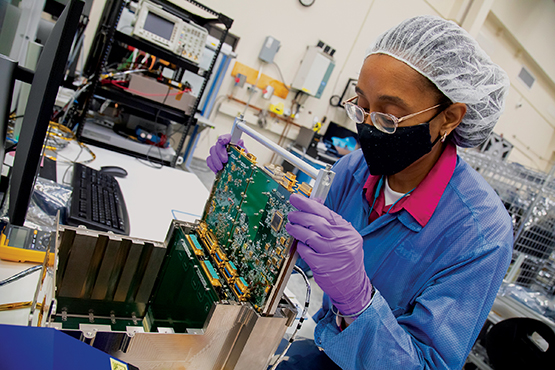 Engineers integrate the electronics box for SwRI’s novel MASPEX instrument, which will sample gases in Europa’s faint atmosphere and possible plumes of materials escaping from surface cracks to determine the chemistry of the moon’s surface and suspected internal ocean. 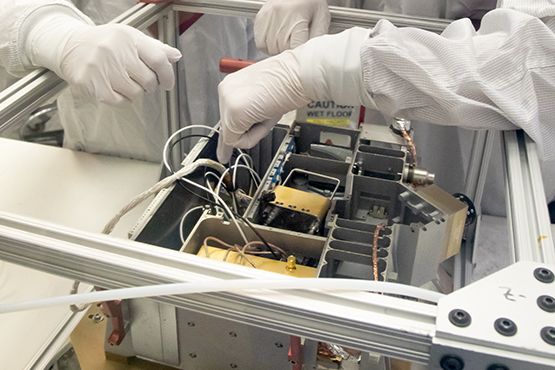 An SwRI-developed ultraviolet spectrograph will help determine the composition of Europa’s atmospheric gases and surface materials and search for plumes of materials escaping from cracks in the moon’s icy surface.