Protecting the Warfighter in Combat

Combat helmets have been in use since around 700 B.C. The earliest ones were made of bronze and offered limited protection. With improvements over the centuries, the helmet’s popularity grew and it has remained an essential part of the warfighter’s uniform.

Today’s helmets are made of advanced composite materials that are lightweight and provide enhanced protection from fragments and small caliber bullets. The helmets also weigh less than previous generations of U.S. military helmets. As an example, the U.S. Personal Armor System Ground Troops (PASGT) helmets were made of Kevlar® and generally weighed  3.6 pounds. Now helmets are composite laminate structures that still may include Kevlar but also advanced materials such as Spectra™ or Dyneema®.

While these newer materials offer improved protection from bullet or fragment penetration, the lower weight has resulted in an increased risk of what is termed “behind-helmet blunt trauma.” This injury is a blow to the head caused when the helmet is hit by a nonperforating bullet or fragment, and can range from a skin laceration to extensive skull fracture and brain damage. Pad suspension systems have been designed for combat helmets to lessen blunt head impact forces. These systems, however, are designed for events such as motor vehicle accidents, tripping or falling incidents and parachutist impact conditions rather than ballistic impact, which is a much more energetic event.

In general, increased helmet weight implies increased stiffness of the helmet structure. Stiff-structured helmets tend to have less back-face deflection during ballistic impact and thus have better protection against behind-helmet blunt trauma. As the helmet weight is reduced, however, stiffness also tends to decrease. The current generation of combat helmets tends to exhibit greater back-face deflection; thus these helmets are a cause for concern. Understanding the mechanics of the transfer of energy and the momentum from the strike face to the back face of the helmet is critical to PPE designers, and the interaction of the dynamic back-face deformation with the head and cranium is critical to warfighter survivability. 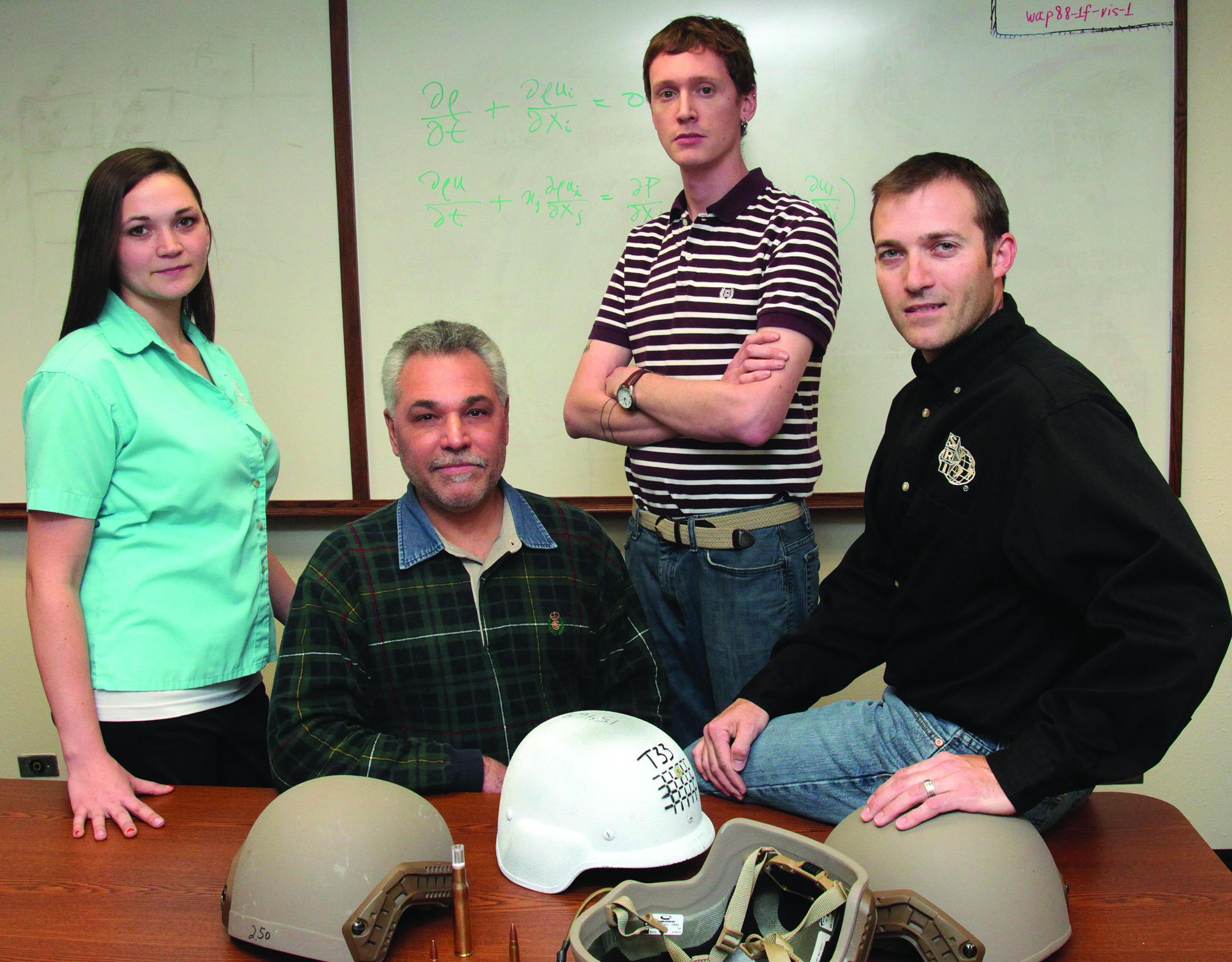 To help PPE designers address these concerns, mechanical engineers at Southwest Research Institute (SwRI) have developed an experimental methodology to evaluate behind-helmet blunt trauma. The project was funded by the U.S. Office of Naval Research as part of its Future Naval Capability program called Lightweight Individual Modular Body armoR (LIMBR). The corner-stone of the methodology is a high-fidelity human head surrogate developed by SwRI. This surrogate fills the void between post-mortem human subject testing and commercially available ballistic head forms. The SwRI-developed human  head surrogate comprises an actual human cranium and synthetic soft tissues to simulate the brain, dura and skin, supported by a HYBRID III® 50-percent male neck assembly. The hybrid neck is designed to behave as a human neck would.

The human craniums are processed craniums commercially available from a number of sources. Because they are fully processed, they are not considered under federal law to be human subject testing. These craniums typically have been dehydrated due to the processing method used to clean and dry them. Processed cranial bone typically is more brittle than live or fresh bone because of the processing procedures. To function as part of the human head surrogate, the cranium requires rehydration to achieve the desired ductility and strength. The SwRI research team developed and investigated several techniques for this. The technique producing the best results involved soaking the cranium for 30 minutes in a shellac solution of ethanol, isopropanol, methyl isobutyl ketone, pure shellac and water.

To represent the brain, dura, cerebral spinal fluids and external skin in the human head surrogate, SwRI researchers used a variety of materials. The brain and external skin were manufactured from Perma-gel®, a colorless, transparent petroleum-based thermoplastic material. At room temperature, the material allows bullet penetrations equal to FBI-standard 10 percent 250 A ordnance gelatin at 39.2 degrees F, which simulates swine muscle tissue. The Perma-gel for the external skin was molded to the cranium with skin thicknesses ranging from 0.2 to 0.3 inch, depending on where it was located on the head.

The dura, the soft tissue between the cranium and brain, was simulated using a layer of silicon with a thickness of 0.02 inch. Typically the thickness of the human dura is 0.01 to 0.03 inch, depending on the age of the human. Finally, water was used to simulate the cerebral spinal fluid.

The human head surrogate has a suite of embedded instrumentation for measuring intracranial pressure, cranial strain and triaxial accelerations. The surrogate is supported by a 50-percent male neck assembly (right).

Two heads are better than one

Two different versions of the human head surrogate evolved as the system was being developed and tested. One is a full-face version fully representing the scalp and facial skin features. The other is a “skull cap” of Perma-gel that covers the cranium sufficiently to represent the skin covered by the helmet, but still with the proper interface between the helmet suspension system and the cranial skin.

Both versions provided similar dynamic results and injury conditions; however, the skull-cap version requires less time to assemble. In general, the mass, size and thickness of all the surrogate components can be adjusted to represent actual human tissues. A gasketed ring assembly was used to mount the human head surrogate to the neck assembly. The assembled head and neck were then rigidly mounted to a steel plate and angled for a normal surface impact prior to testing.

The human head surrogate includes a suite of embedded instrumentation for measuring intracranial pressure, cranial strain and triaxial accelerations. Pressure transducers are used to measure intracranial pressures. Four gauges are typically embedded directly into the surrogate brain. These gauges measure the overpressure generated in the cerebral spinal fluid that surrounds the brain resulting from the dynamic deflection of the cranium caused by interaction with the back-face deflection of the helmet materials.

Triaxial strain gauges measure cranial bone strain during ballistic impact. Twelve of these gauges were installed, arranged in groups of three and deployed in a triangular pattern around anticipated impact or target points. The gauges were bonded directly to the refreshed cranium and then the surrogate skin was molded over them.

Finally, two triaxial accelerometers, one installed in the hard palate of the head and the other in the helmet, measure the dynamic motion of the impact. Data from these gauges are captured in digital form using a high-speed data acquisition system with a sampling rate of one million data points per second.

Once the human head surrogate was fully instrumented, its performance was evaluated by subjecting it to a series of ballistic tests. The objective was to study the effect of back-face deflection on the helmet caused by nonperforating ballistic impact, so great care was taken to ensure that no perforations occurred.

To measure the projectile’s impact velocity, two ballistic light screens were placed one meter apart. A digital chronograph was connected to the screens to measure the time the projectile breaks the light beam at each screen. Projectile velocity was then calculated based on the time difference. The projectiles were fired from a universal gun mount system placed two meters in front of the first light screen, with the human head surrogate and mount assembly placed two meters behind the second screen. High-speed video, with frame rates ranging from 15,000 to 250,000 frames per second, was used to document each experiment. Flash X-ray imaging also captured the event from two angles, a side view and a top view.
Cranial fractures are described as simple (linear), basilar or depressed, and clinical treatments are based on head injuries defined as critical, moderate and minor. A similar system was used for the human head surrogate. Minor fractures or injuries that occurred during testing were characterized as simple surface fractures, with no penetration through the thickness of the cranial bone. Moderate fractures were characterized by fractures that do penetrate through the thickness of the cranium, but the fractures are not dislocated and the cranium is still intact as a single structure. For critical or significant fractures or injuries, the cranium is fractured such that it is no longer a single structure and is fragmented into large pieces or segments.

During testing involving a 9-mm round, helmets with suspension pads outperformed those with no padding. The padded helmet tests resulted in no injury, while the other resulted in moderate injury. In tests using an M80 rifle round, the helmet successfully protected against the round penetrating it. However, the force of the impact caused a critical injury, demonstrating the need to better protect against behind-helmet blunt trauma.

This sequence shows a helmeted human head surrogate. The first is a reference image prior to testing.

In images two and three, a 9-mm projectile was fired at two speeds, with no fracture in image two.

This image shows the damage caused by an M80 rifle round, which resulted in a critical injury.

The SwRI-developed human head surrogate and its test methodology show great potential for providing insights into injuries resulting from a variety of ballistic threats. With it, designers will be able to craft helmets that offer improved protection for warfighters.

Based on the success of this project, SwRI researchers have submitted a white paper to the NFL Under Armour GE Head Health Challenge II, an initiative for developing new technologies and materials for protecting professional football players’ brains from traumatic injury.

The authors wish to thank the U.S. Office of Naval Research and the Navy Health Research Center for funding this effort, and specifically, James Mackiewicz and Lee Mastroianni