Physical analog modeling is a well-established laboratory technique for reproducing the developmental sequence and overall geometry of geologic structures. In the models, rock strata are represented by table-top scale analog layers such as:

Analog models can be constructed and deformed in a number of ways to simulate real-world structures and test tectonic hypotheses. Construction of digital terrain models (DTMs) at different time steps, photography, and horizontal and vertical slicing of models enables in-depth characterization and quantification of model results.

The analog materials and deformation styles are selected to reproduce, at small scale, geometric and kinematic features of natural geologic structures. To simulate development of the geologic structures, the analog layers are deformed consistent with the observable geology.

The Southwest Research Institute (SwRI) Physical Modeling Laboratory is a state-of-the-art facility designed to emulate a variety of tectonic settings for both oil and gas and planetary science applications. Updates and modifications increase the range of simulated geologic environments and maintain SwRI capabilities as an innovator in the field. Displacements are imparted to the models by gravity or programmable motor drives. The apparatus can be configured to represent most tectonic deformation style or combinations of these styles, for example:

Still photographs are used to document the pre-, syn-, and post-kinematic stages of the experiments. While deformation is active, models are photographed from above at set intervals and with a variety of illumination angles. Photographs are also taken from various angles and magnifications throughout the experiment and are keyed to displacement magnitude. Vertical and horizontal slicing after model deformation allows analysis and photography of the internal structure of the model. 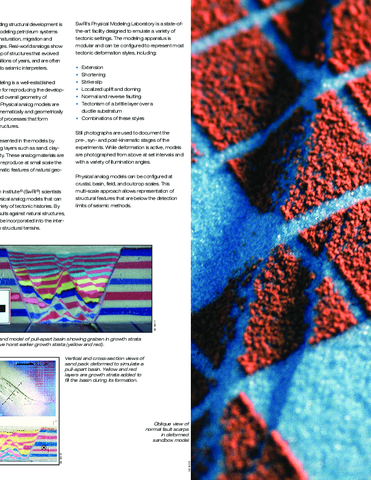 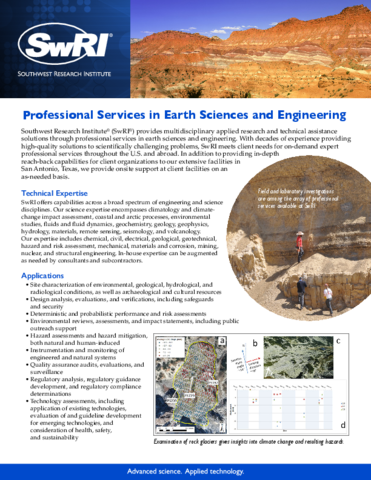