SwRI patents high-speed flash memory system for use on satellites

The patent, titled “Systems and Methods for Improved Access to Flash Memory Devices,” was awarded recently to inventors Michael A. Koets, Larry T. McDaniel III and Miles R. Darnell, all of SwRI.

“Our use of the patented technology revolves around high-speed, high-capacity storage of data on satellites,” said Koets, a staff engineer in SwRI’s Space Science and Engineering Division. “A representative application is the storage of images collected by satellites for weather monitoring and prediction.”

Weather satellites rapidly collect many high resolution images, generating very large amounts of data. However, the satellites are only able to transmit the data to receivers on the ground when they are over certain locations on the globe.

“All of that data needs to be stored to memory on the satellite as it is collected. Our high-speed, high-capacity flash storage system provides a means to do that,” Koets said. “It can record data to flash memory up to 100 times faster than previous approaches.”

Other applications of the patented technology include storing radar data collected by Earth-monitoring satellites studying glaciers or earthquake zones, or storing scientific data collected by deep space missions, such as those sent to investigate asteroids.

Flash memory is efficient and small, allowing smaller, less expensive satellites to gather much more scientific data than conventional data recording devices. Flash memory has become a mainstay of consumer electronics such as mobile phones and thumb drives, but the rigors of the space environment have slowed its adoption for satellites and interplanetary spacecraft. The SwRI technology allows slower but more robust flash memories that can operate in space while achieving the performance close to that of contemporary consumer electronics.

“We have employed this technology to provide higher performance data storage systems and allow the collection of much more scientific data than would have been possible with older approaches,” Koets said. 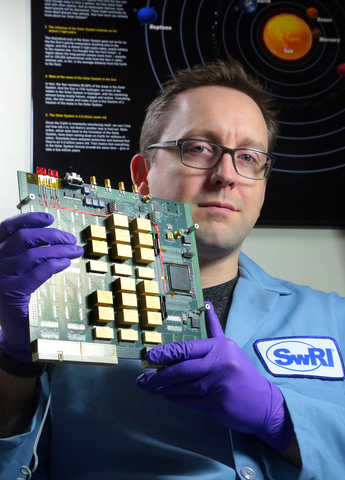