July 19, 2006 — A device that uses guided wave technology to inspect heat exchanger tubes has received a 2006 R&D 100 Award. R&D Magazine selected Southwest Research Institute's® (SwRI®) MsS® (Magnetostrictive Sensor) Heat Exchanger Probe as one of the 100 most significant technological achievements of the past year.

Heat exchangers are essential to the operation of many systems in industry, including processing plants and electric power generation plants. Because of their vital importance to plant operation, heat exchangers are inspected and maintained during regular service outage.

The hand-held probe generates and detects torsional guided waves which fill the entire tube wall. These waves also have the advantage that they don't couple into liquid on the tube wall like other waves. A short pulse of the waves generated by the probe is mechanically coupled to the tube under inspection and propagates along the length of the tube. When the transmitted wave encounters geometric anomalies such as corrosion and cracks in the tube wall, a part of the wave is reflected and travels back to the probe where the signal is detected. At the same time, the transmitted pulse keeps propagating toward the far end of the tube, producing reflected signals whenever it encounters anomalies. 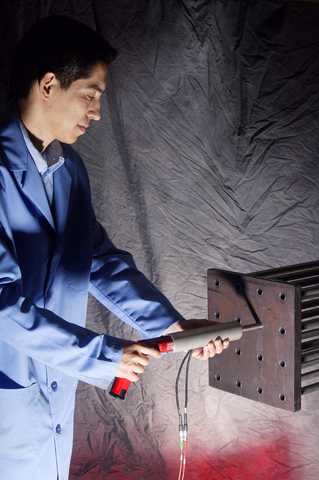