A Chemical Solution to Plastic Pollution

Plastics are ubiquitous in modern life. Nearly 400 million tons of plastic are produced annually and found in everything from cell phones to cars, toys, food packaging, home goods and medical products. For decades, consumers have collected and recycled plastics expecting that the material will be reused in the manufacturing process. However, of the piles of plastic waste collected in the United States, more than 90% ends up in our oceans, landfills or incinerated for energy production.

As a result, these plastic pollutants affect wildlife and the environment, take years to decompose at landfills and result in increased greenhouse gas emissions with incineration. For instance, the Ocean Cleanup organization estimates that the Great Pacific Garbage Patch, the largest of five plastics accumulation zones in the world’s oceans, occupies nearly a million square miles. Located about halfway between Hawaii and California, it is about twice the size of Texas. 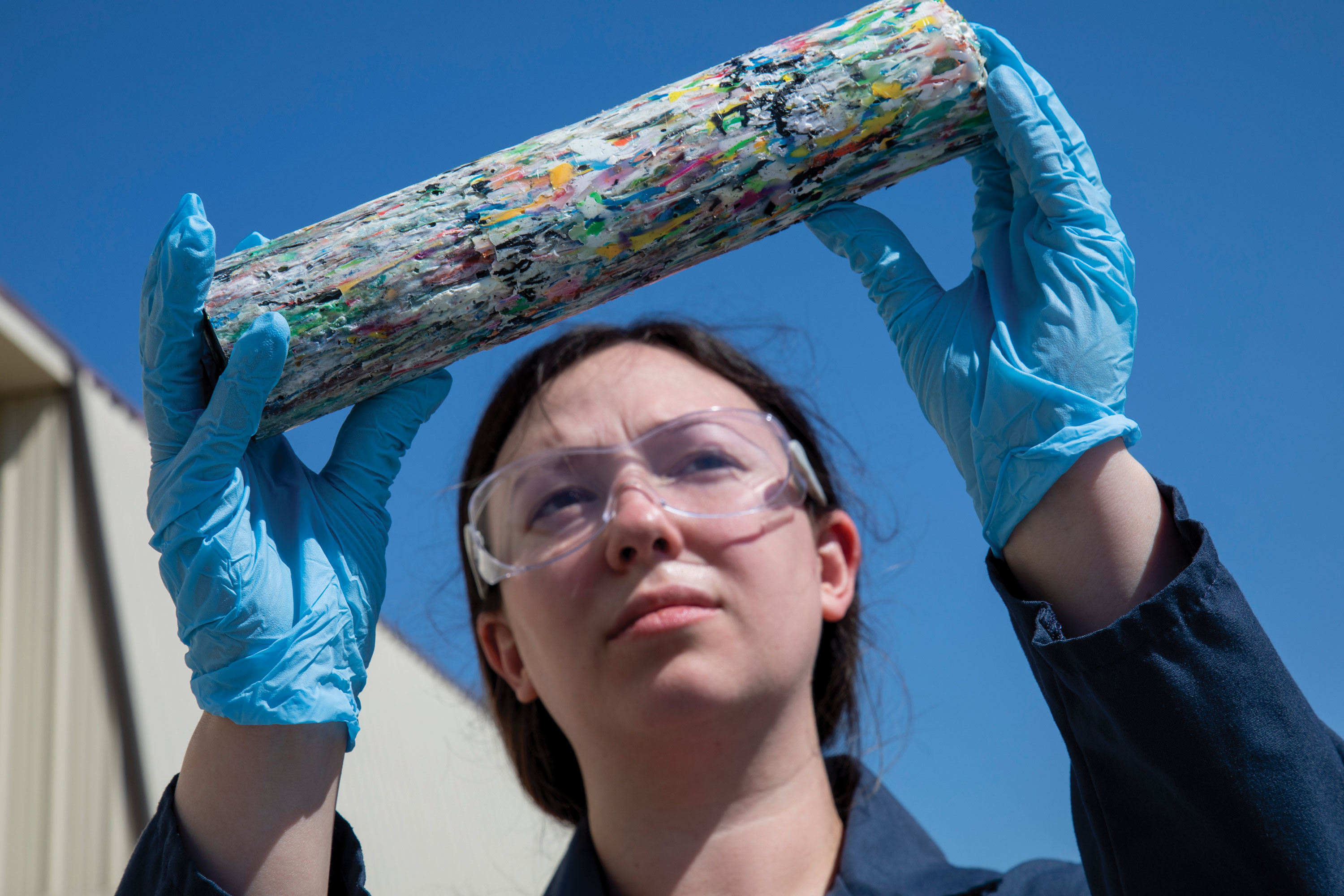 New SwRI-developed processes are chemically recycling mixed plastics, shown melted together into a cylinder, to target the large number of plastics in our economy that are currently not being recycled. 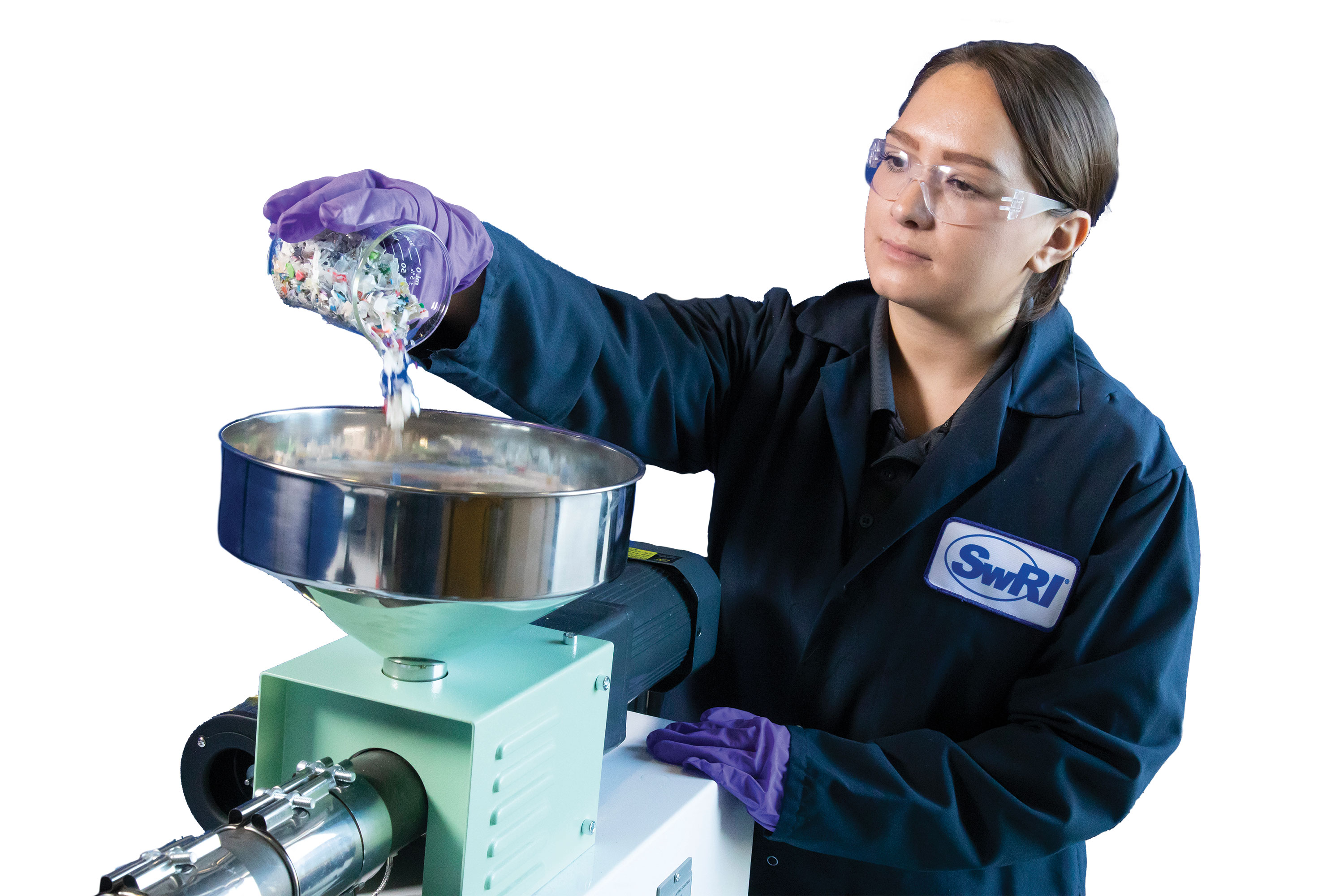 Post-consumer and post-industrial plastic flakes are heated and pressurized to extrude plastic into a flowable material to feed into SwRI reactors.

Today, 71% of the plastic produced is formally collected after use, but less than 15% is actually recycled. The plastics that are recycled use conventional mechanical recycling technologies, which change the physical structure of the material while keeping the chemical structure the same.

The plastics industry is one of the largest manufacturing industries in the U.S., generating $451 billion per year in shipments and employing nearly a million people directly and more than 1.5 million indirectly.

The recycling process is initiated by the consumer, who sorts and decides which materials to recycle and which to dispose of as waste. The recyclables are then collected and delivered to a material recovery facility where a combination of automated and manual processes sort the materials into different materials streams: metals, cardboards and paper, glass and waste plastic. The waste plastics are further sorted by polymer type, which are identified by a number between one and seven inside the familiar triangle made of arrows. Each number corresponds to a different type of plastic. After collection and sorting, the materials are washed, dried, ground and regranulated to recycle the materials into like products. For example, plastic water bottles are recycled into more water bottles. 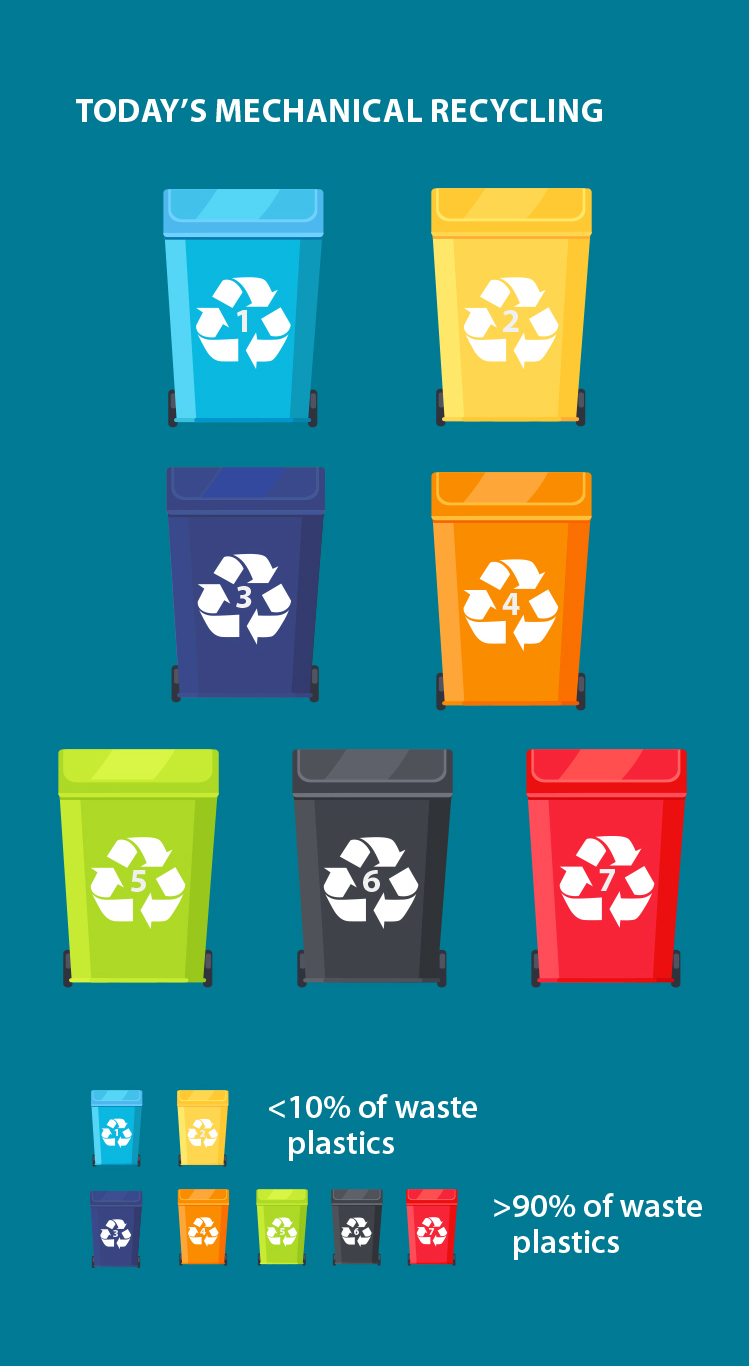 Just because a plastic material has the “chasing arrows” symbol does not mean it is recyclable.

Only plastics labeled #1 and #2 are readily recyclable using mechanical techniques. Recyclable #1 is the most common plastic used for single-serving bottles of water, carbonated drinks, juices, vegetable oil and ketchup. Recyclable #2 can be found in milk jugs, detergent jugs, shampoo bottles and other household cleaner bottles. Once sorted, these plastics are washed, dried and regranulated to make new plastic products. Mechanical recycling is successful for single-type bulk plastic streams, where water bottles can be recycled into more water bottles.

Anything but #1 and #2 plastics are pulled out and sent to landfills or incinerators. Plastics #3-7 account for more than 90% of waste plastics collected and are found in piping, siding, grocery bags, food containers, plastic bottle caps, takeout containers and polystyrene.

This diverse experience is critical to recycling mixed plastics, which is complicated by the various types of plastics, their different flow properties and contaminants.

Pyrolysis is not new. It was used by the ancient Egyptians to extract methanol from wood to create embalming fluids for mummies.

To solve the plastics recycling conundrum, chemical engineers are investigating several approaches for recycling waste plastics, including pyrolysis and gasification. Pyrolysis and catalytic pyrolysis use high temperatures and inert atmospheres to break down material into more basic molecules. A process known as fast pyrolysis has been the go-to technology for converting biomass, or plant-based materials, into biofuels. SwRI is adapting this technology for plastics. Another common technique for processing waste materials into useful chemicals is gasification. Gasification also employs pyrolysis as part of the process, but further processes the feedstock into carbon monoxide and hydrogen.

One key feature of pyrolysis is the ability to handle mixed plastics without sorting. SwRI has used pyrolysis to process heavy oil, coal and all types of biomass. Engineers are transferring that experience to accelerate technology development to convert waste plastics into pyrolysis oils. These oils can then be used as feedstocks to produce new plastic products, useful chemicals, and fuels, or they can be integrated into traditional refinery streams. 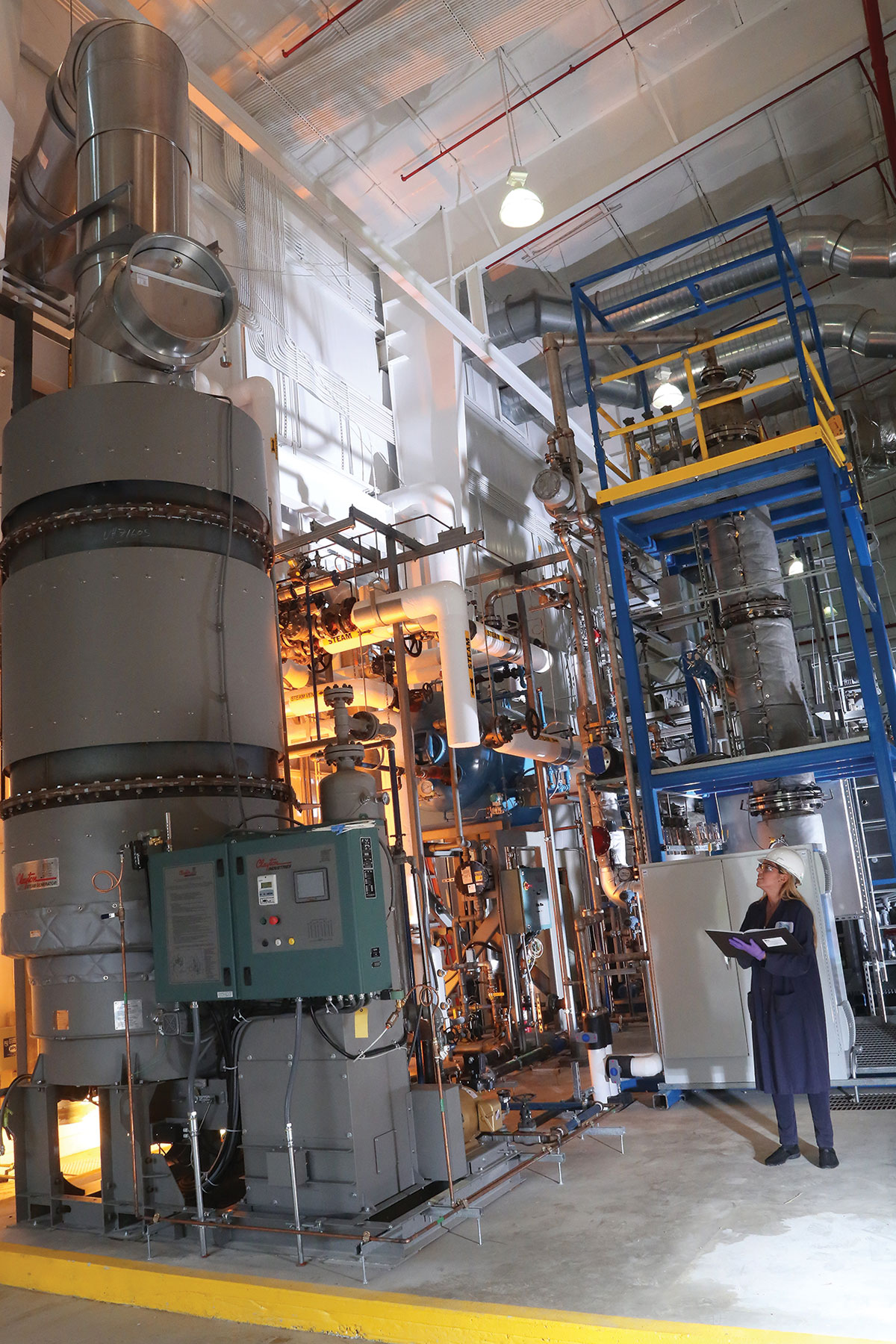 SwRI has more than 25 years of experience creating novel processes to create fuels and chemical products from unconventional sources. We demonstrate these at lab, pilot plant and near commercial scales. 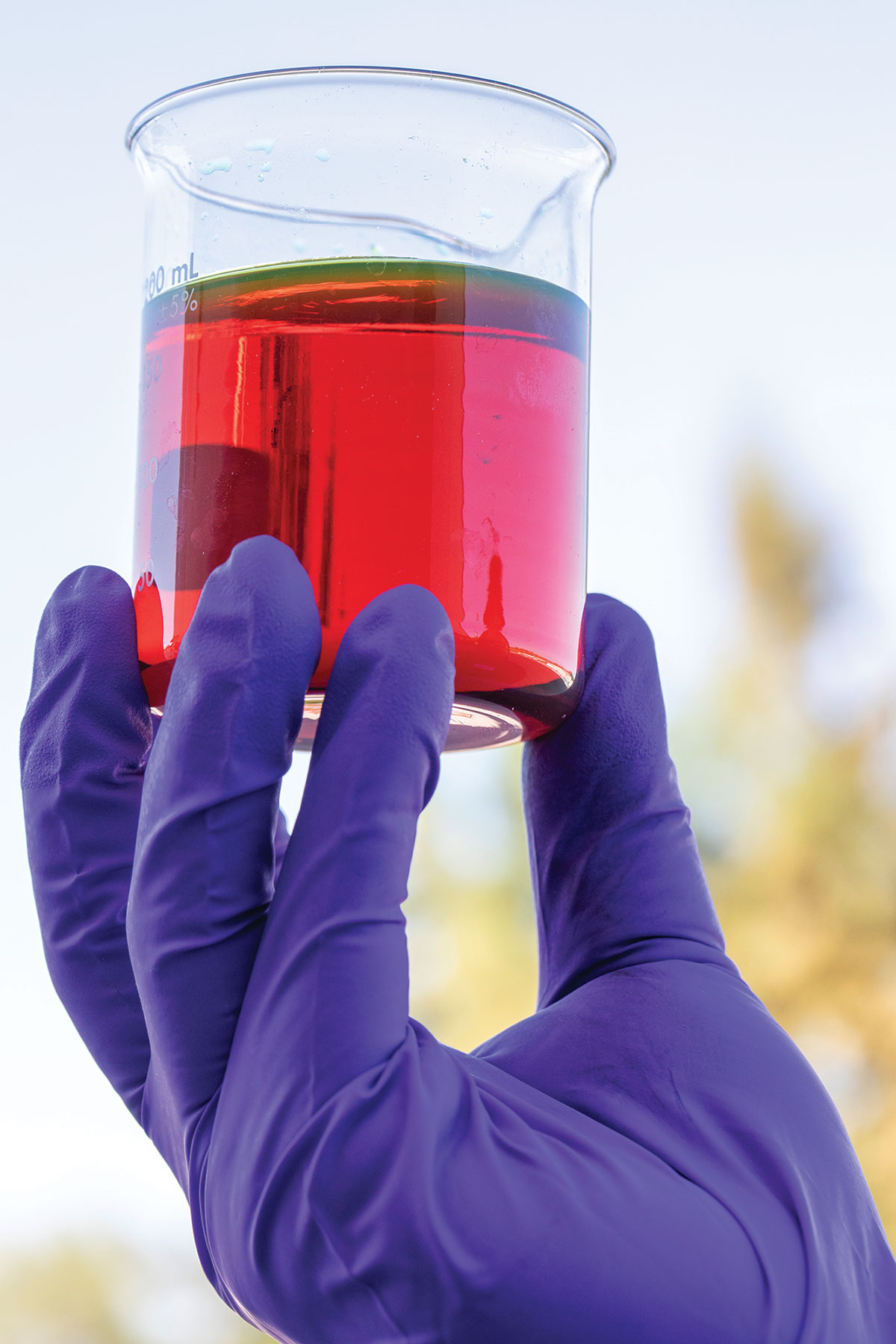 Pyrolysis oils made by chemical plastic recycling are versatile and can be processed into a large slate of chemicals. Pyrolysis processing provides a fairly quick response to shifting market demands for different chemical products.

To begin the recycling process, plastics are dried and shredded into small flakes and fed into a pyrolysis reactor, typically using a heat transfer media such as sand or a catalyst. Pyrolysis begins as the material melts at high temperatures without the presence of oxygen. Through surface interaction with the solid media, the waste plastic chemical bonds start breaking down into smaller and smaller molecular components.

Gasification also uses pyrolysis, but the process is conducted in a single column. Shredded waste plastic is fed through the top of the column where it is dried and pyrolyzed before air or oxygen is introduced, and the oil is partially combusted to create syngas (carbon monoxide and hydrogen). The syngas is then reduced and piped out, while ash is removed using cyclonic separation to extract particulates.

Conventional pyrolysis of plastics creates mostly hydrocarbons. Gasification allows the introduction of oxygen to create syngas, which can easily be converted into compounds like methanol and isopropyl alcohol.

Coke is a hard, grey, porous substance with a high carbon content that is typically used for iron ore smelting.

These simpler compounds can be condensed and used to create fuels or chemical feedstocks. Another byproduct of pyrolysis is carbon, as heavier molecules tend to polymerize and form coke particles. The coke byproducts can be used directly as heat energy by using a circulating fluid bed to introduce air into the process, allowing the coke to burn and provide energy to fuel the pyrolysis process.

Once the plastics have been reduced into their basic components, those components can serve as building blocks for many different types of products. Carbonaceous and ash solids can be used in products like roofing materials, concrete or tires. Some of the liquid products are what might be called “pygas,” or pyrolysis gasoline, which has a similar boiling point range as gasoline or naphtha, a flammable liquid hydrocarbon mixture.

Those oils can be further fractionated into chemicals of interest. For instance, pyrolysis oils can be processed in naphtha crackers to produce more plastic feedstocks. A naphtha cracker can process lower boiling point hydrocarbons into ethylene and propylene, the basic building blocks for plastics and subsequent manufacturing.

Cracking, which breaks heavy hydrocarbon molecules into lighter molecules using heat, often done in a reducing environment (with hydrogen) combined with pressure and catalysts, is the most important process for the commercial production of jet, gasoline and diesel fuel.

SwRI is exploring new pyrolysis-based chemical processes to use mixed plastics to create a truly cyclic recycling solution for the tremendous amount of plastic waste currently ending up in oceans, landfills or incineration plants.

Chemical recycling advances the current state of recycling to allow consumers to use a plastic product, which could then be recycled and reused to make more plastics, to avoid adding new plastics into the environment in what is referred to as a circular economy. The SwRI pyrolysis process could offer a transition to flexible, total recycling. Pyrolysis oils from plastics fed into a naphtha cracker convert them back into the basic building blocks for plastics. The ultimate goal would be net zero new plastics generated. In reality, the increasing demand for plastic products also needs to be addressed as demand is higher than what recycling all waste plastics would supply.

Pyrolysis oils are versatile and can be processed into a large slate of chemicals, providing a fairly quick response to market demands for different chemical products. For example, during the COVID pandemic, materials to produce personal protective equipment were in high demand, creating a need for plastics, components and chemical feedstocks. Chemical engineers can tune the pyrolysis process in the reactor to target generation of different product slates depending on market drivers.

While the global plastic waste problem is going to need a multifaceted solution, SwRI is focusing on new ways to expand recycling. Our chemical engineers are working with clients to develop new techniques for producing specific high-value commodities from plastic pyrolysis products. With expertise and facilities developed over the last quarter century working with heavy oils, biomass and other alternative feedstocks, the Institute offers lab-scale, pilot scale and demonstration units to test, tune and validate processes. We recently completed and have started commissioning a new facility to support this research on a large demonstration scale, particularly to address mixed plastic wastes ending up in our oceans and landfills. 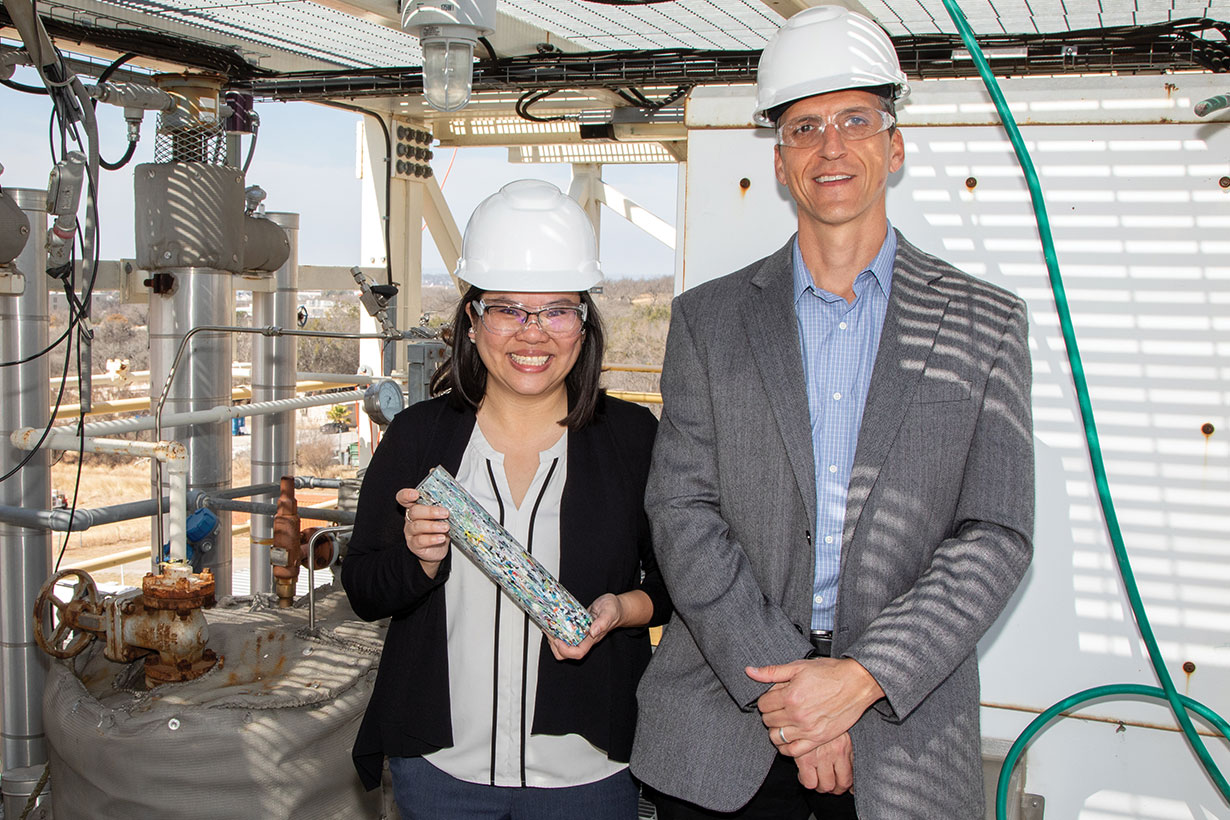