Diamonds in the Sky

Lucy’s Mission to the Trojan Asteroids

One of NASA’s principal roles is to help us understand how our world came to be — how a swirling mass of gas and dust orbiting the Sun eventually turned into our Earth, a complex planet that can support life. We now understand that the Earth did not form in a vacuum (pun intended), but instead grew in a system where young protoplanets pushed each other around, fighting for the resources needed to grow. Asteroids and comets are the leftovers of this epic battle. The planetary formation process sculpted these so-called small body populations, and they remain as largely unchanged relics that contain vital clues to our origins. If we want to understand the Earth, we must understand these small worlds. Given their enormous value in understanding our history, asteroids are like rare diamonds in the sky.

Asteroids are rocky fragments ranging from less than a half mile wide to 500 miles across.

Led by Principal Investigator Dr. Hal Levison and Deputy Principal Investigator Dr. Cathy Olkin, a group of scientists at Southwest Research Institute conceived the first space mission to explore a population of small bodies known as the Trojan asteroids. These space rocks orbit the Sun in tandem with Jupiter in two swarms, one preceding the gas giant and the other trailing it. Jupiter is so massive that it normally scatters all asteroids in its vicinity. However, the combined gravitational influences of the Sun and Jupiter have trapped these Trojan asteroids in stable orbits, probably since the planets formed more than 4 billion years ago.

In 2017, NASA selected the SwRI-led Lucy mission as the lucky 13th mission in its Discovery program. The mission was named after the fossilized skeleton of an early hominid found in Ethiopia in 1974, which in turn was named after a celebratory evening the paleontologists spent dancing and singing to the Beatles’ song “Lucy in the Sky with Diamonds.” Just as the Lucy fossil provided unique insights into the origin of humanity, the Lucy mission promises to revolutionize our knowledge of the origin of humanity’s home world.

The Trojans include a mix of physically distinct asteroids in a relatively small region. How did such a diverse population of objects come to occupy their particular region in space? To understand what this clue reveals about the history of the solar system, we need to visit a sampling of these objects. Lucy will study a record number of objects — seven Trojan asteroids, counting binary pairs, plus one main belt asteroid. No other space mission has included so many different destinations in independent orbits around the Sun. 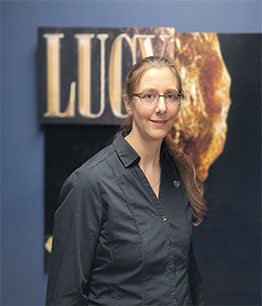 The Lucy spacecraft, built by Lockheed Martin Space, will be more than 46 feet (14 meters) from tip to tip. Two huge solar panels, each almost 24 feet (7 meters) in diameter, will power the spacecraft as it flies beyond the orbit of Jupiter, the farthest any solar-powered spacecraft has traveled from the Sun — another record for Lucy. Yet despite their impressive size, the solar panels will only deliver about 500 watts of power once the spacecraft reaches the planned 530 million miles (850 million kilometers) from the Sun. Lucy will carry a suite of remote sensing instruments. Various institutions across the nation contributed Lucy’s primary instruments, L’LORRI, L’TES and L’Ralph. Designing, building and testing instruments to survive a 12-year, 4-billion-mile trip is challenging.

Cryomechanics is the production and behavior of materials at very low temperatures, including cryocoolers needed for some space instruments.

L’Ralph is the most complicated instrument, combining an infrared spectrometer, the Linear Etalon Imaging Spectral Array (LEISA) and a visible-light color camera, the Multi-spectral Visible Imaging Camera (MVIC), which was built at SwRI’s San Antonio headquarters. Lucy’s MVIC is small enough to fit in one hand, yet its five color bands cover the complete visible spectrum. Each band was specifically chosen to help scientists identify different asteroid components. For example, the red band is sensitive to phyllosilicate, a hydrated mineral scientists expect to find on the Trojans’ surfaces, while the violet band will help determine whether the asteroids’ surfaces contain troilite, a rare iron sulfide mineral. The violet band is also sensitive to cyanide absorption, which, if detected around an asteroid, would indicate active outgassing even after eons orbiting far from the Sun in the frigid cold. While making a camera for a planetary mission is a first for SwRI, the team had all the expertise needed in detectors, optics and cryomechanics. L’Ralph’s other camera, the imaging spectrometer LEISA, and the rest of the instrument were fully assembled and tested at Goddard Space Flight Center. LEISA detects absorption lines that serve as the fingerprints for different silicates, ices and organics of interest on the surface of the Trojan asteroids. 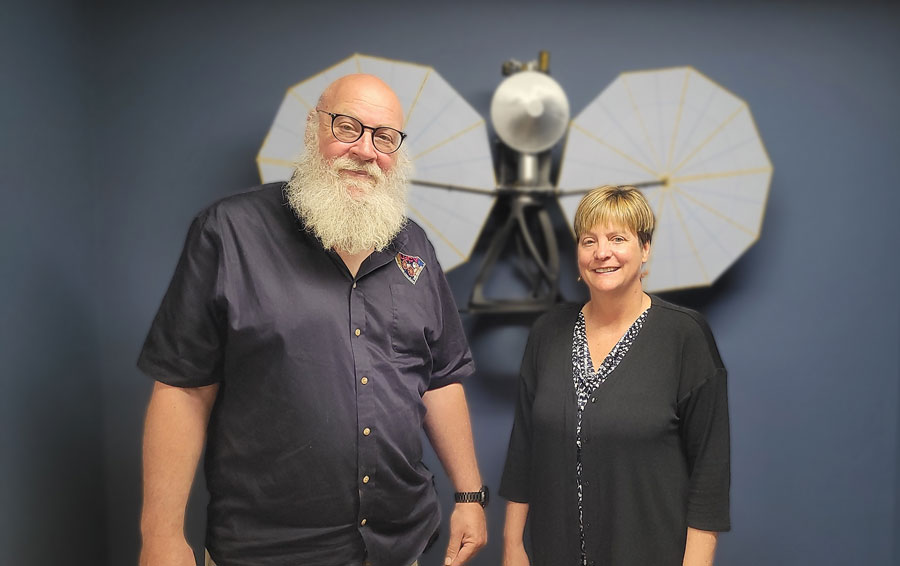 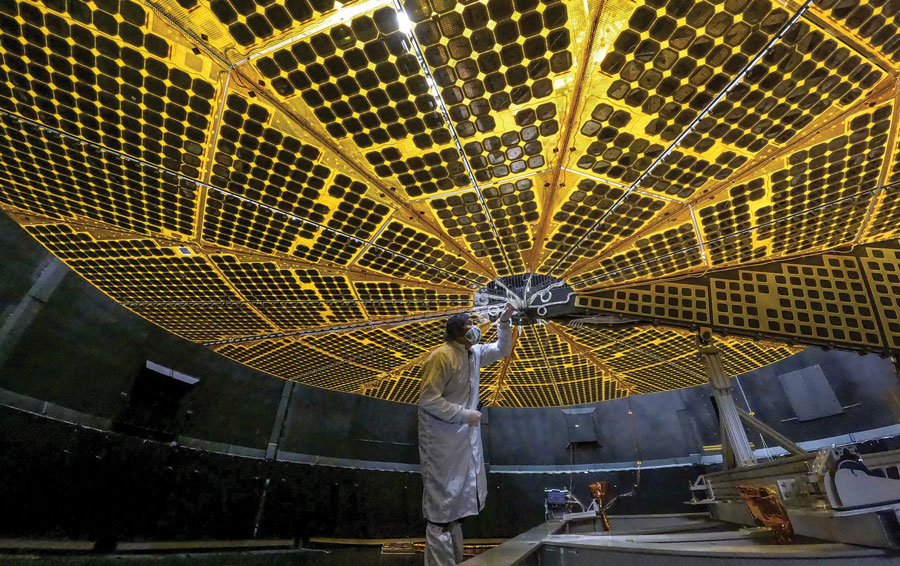 Engineers deploy one of the Lucy spacecraft’s massive solar arrays for testing in a thermal vacuum chamber at Lockheed Martin.

The Lucy payload includes high-heritage, space-proven science instruments: The “L” before the name designates the latest “Lucy” version of a proven line of instruments. L’TES is based on an instrument that flew on the Mars Global Surveyor spacecraft (1996-2007). L’Ralph and L’LORRI are based on instruments still flying aboard New Horizons, now 50 astronomical units away, traveling through the Kuiper Belt at the edge of the solar system. An astronomical unit (AU) is roughly the distance from Earth to the Sun or about 93 million miles.

An SwRI team also constructed L’Ralph’s main electronics box, which contains systems that control the instrument and communicate with the spacecraft. Once a spacecraft travels beyond Earth’s protective magnetosphere, it enters an extremely harsh radiation environment that would damage unprotected electronics. Because L’Ralph is such a complicated instrument, and because mass and power are at a premium for deep space missions, the custom-built electronics box had stringent requirements. Its electronics collect MVIC and LEISA data, digitizing and reformatting for downlink before forwarding to another electronics box that sends the data to Earth. Even the computer logic was specially designed to gracefully recover from any disruptions caused by cosmic rays and other random events that the spacecraft will undoubtedly encounter over its 12-year journey.

L’LORRI, Lucy’s LOng Range Reconnaissance Imager, is a high spatial resolution visible imager built by Johns Hopkins University’s Applied Physics Laboratory. This black-and-white panchromatic visible light imager will provide the most detailed images of the surfaces of the Trojans. L’TES, Lucy’s Thermal Emission Spectrometer, was built at Arizona State University. This far-infrared spectrometer is effectively a touchless thermometer that will help scientists understand how effectively the Trojans retain heat while also providing information about the composition and structure of asteroid surface materials. 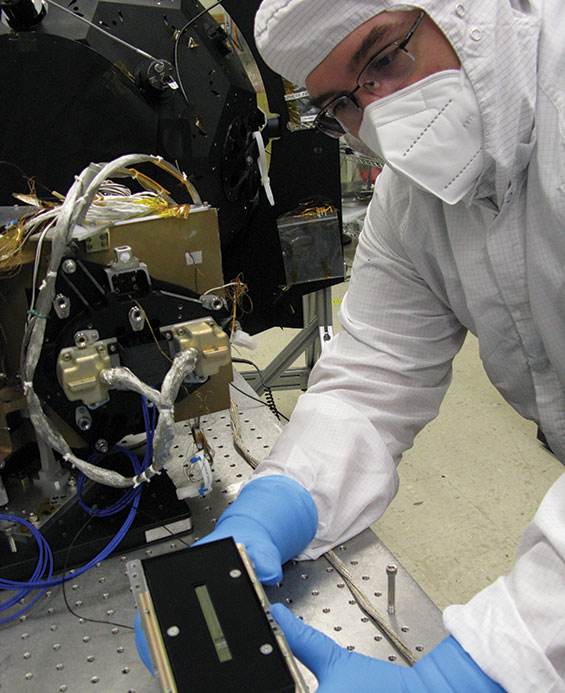 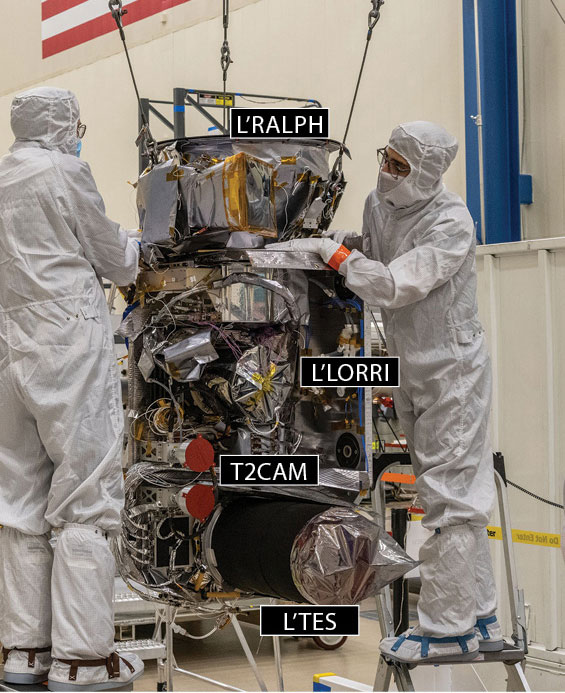 Engineers integrate instruments onto Lucy’s instrument pointing platform prior to installation on the spacecraft.

Lucy’s 6.5-foot high-gain antenna not only communicates with Earth but also allows scientists to infer the mass of its targets based on the Doppler shift of radio signals. Lucy’s terminal tracking camera (T2CAM) will both track the asteroids during close approach and take wide-field images of the asteroids to better ascertain their shapes. All the instruments except the antenna are located on the spacecraft’s instrument pointing platform.

Lucy is slated to launch from NASA’s Kennedy Space Center at Cape Canaveral, Florida, on an Atlas V 401 rocket during a 23-day launch period starting October 16, 2021. The spacecraft will fly past Earth for two gravity assists to slingshot Lucy toward the Trojan asteroids. In April 2025, en route to the outer solar system, Lucy will travel through the main asteroid belt that orbits between Mars and Jupiter. There it will encounter its first target, Donaldjohanson, an asteroid that the Lucy team named after one of the paleontologists who discovered the Lucy fossil. Following this encounter, Lucy will continue to the leading swarm of Trojan asteroids, the L4 Trojan swarm. Known as the “Greek camp” of Trojan asteroids, they are named after Greek heroes from the Trojan war (except for one named for the Trojan “spy” Hektor). Lucy will fly past four of these Trojans: (3548) Eurybates and its satellite Queta in August 2027, (15094) Polymele in September 2027, (11351) Leucus in April 2028 and (21900) Orus in November 2028.

The spacecraft’s orbit will then take Lucy back toward Earth. When its orbit takes the spacecraft outward again, Jupiter and the Trojan swarms will have rotated enough to cause the spacecraft to pass through the trailing L5 swarm, known as the “Trojan camp.” In March 2033, Lucy will fly past the Greek “spies” in the Trojan camp, (617) Patroclus and its binary companion Menoetius. The flyby of this binary pair will be the grand finale of the mission. However, Lucy will remain in a stable orbit, continuing to fly through the Trojan swarms for many years to come. 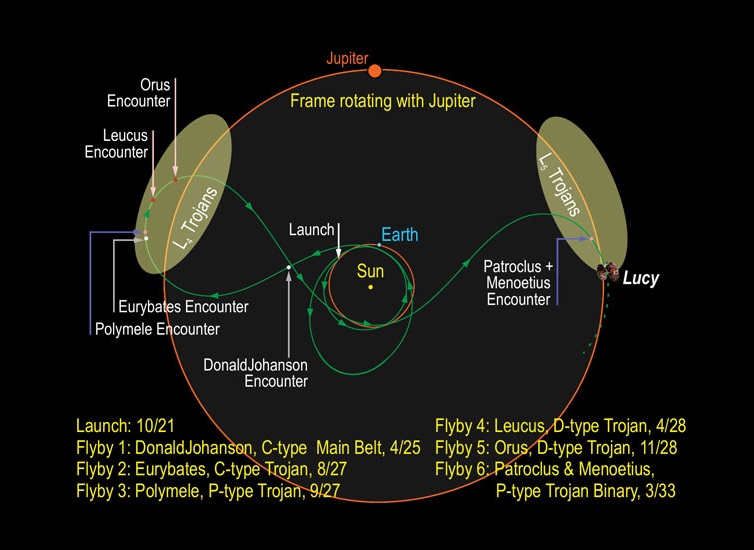 This diagram shows the trajectory of the Lucy spacecraft.

Throughout this journey, the spacecraft will explore the asteroids and send data back to Earth. The mission’s Science Operations Center (SOC) at SwRI’s office in Boulder, Colorado, will act as the interface between the science team, which determines the mission’s observations, and the Mission Operations Center at Lockheed Martin Space in Littleton, Colorado, which manages and sends commands to the spacecraft. SwRI Planetary Science Director Joel Parker oversees Lucy’s SOC, which controls spacecraft instruments. It develops commands to capture images, automate data processing, return data to Earth and archive the data for generations to come.

Supporting a long-running outer solar system mission like Lucy is nothing new for SwRI. The team has supported the New Horizons mission to Pluto and beyond as well as the Juno mission to Jupiter. SwRI also supports operations for a number of instruments on other planetary and heliophysics missions.

The Lucy team had to overcome some unique challenges, such as building instruments and assembling a spacecraft during a pandemic. However, the team persevered and remains on schedule for an October launch. Lucy’s epic journey will be quite unlike any other, with an audacious flight path, traveling 4 billion miles to visit eight unique bodies. Because the objects vary widely in spectral type, color, size and collisional history, visiting these diamonds in the sky promises to reveal much about the early history of the solar system and our place in it.

Led by SwRI’s Levison and Olkin, the mission is managed by NASA Goddard in Greenbelt, Maryland. The spacecraft is built by Lockheed Martin Space in Littleton, Colorado. Instruments have been contributed by Goddard Space Flight Center, Johns Hopkins University Applied Physics Laboratory in Laurel, Maryland, and Arizona State University in Tempe, Arizona. KinetX in Simi Valley, California, will provide mission navigation. Launch operations will be conducted by NASA’s Kennedy Space Center. As a Discovery Class mission, Lucy is overseen by the Planetary Missions Program Office at the Marshall Space Flight Center in Huntsville, Alabama, for NASA’s Planetary Science Division.