Hydraulic fracturing treatments inject high-pressure fluids into wells that run thousands of feet below the Earth’s surface. This high-pressure fluid breaks apart or “fractures” rock formations containing trapped oil and natural gas resources. To prevent the fractures from closing again, sand or tiny particles called “proppant” are pumped into the fracture network to prop the fractures open. The vast underground network of fractures releases trapped hydrocarbon resources, which flow back to the wellhead for collection and processing.

Hydraulic fracturing is a remarkable process, but there are also some real challenges with conventional fracturing methods. Conventional treatments use enormous amounts of water, as much as 11 million gallons per well depending on geographic location. That water adds tremendous financial and environmental costs. First, water is often scarce at drilling sites. Trucking water to the wellhead burns fuel, increases traffic and emissions, and inflicts wear and tear on roads. Once used, the salt- and chemical-laced wastewater poses environmental challenges. Either the water must be disposed of in injection wells or trucked away for treatment. And wastewater injection wells have contributed to an exponential growth in minor earthquakes in oil and gas producing areas (see “Triggered Tremors” in the Spring 2018 issue of Technology Today). To address these challenges, industry, government and the public are looking for alternative fracturing methods to minimize or possibly eliminate water use in hydraulic fracturing.

Griffin Beck is a research engineer in SwRI’s Propulsion and Energy Machinery Section. He designs and analyzes fluid machinery systems with a focus on steady-state and transient models of systems used in the oil & gas and propulsion industries. 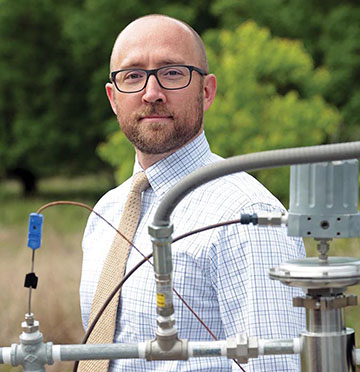 Southwest Research Institute is exploring one alternative to water-based methods that would use natural gas as the primary fracturing fluid. Working with the National Energy Technology Laboratory and a commercial partner, SwRI engineers are developing an alternative hydraulic fracturing process that would generate a natural gas-based foam for injection into a well, a process that could reduce water consumption by as much as 80 percent. This alternative method is advantageous for several other reasons as well. For one, natural gas is typically available at the wellhead or from nearby processing plants, which could reduce the amount of traffic to and from the site. Furthermore, in America’s current energy marketplace, natural gas is a relatively low-cost commodity and the natural gas from the foam could be recovered, processed and sold rather than creating waste that requires cleanup or disposal.

This Latte is a Gas

So how do you turn natural gas into foam? To answer this question, look no further than your local coffee shop. A barista creates your foamy latte by injecting steam (a gas) into milk (a liquid). To create the whipped cream that tops your favorite frappé, heavy cream (a liquid) is whipped and air bubbles (a gas) permeate the liquid to create foam. Essentially, foam is formed by trapping pockets of gas in liquid.

Though the tools are different, foamed fracturing fluids are created by mixing gas with a liquid counterpart. Generally, the volumetric concentration of the gas in these fluids will range from 50 to 85 percent, so the water need is reduced by that same amount. With the right ingredients, this mixture of liquid and gas can form stable foam that is a lot like your latte topping.

The use of foams in the oil and gas industry is not new. In fact, foams have been used in various oil and gas applications for more than 50 years. Foams were first used in the 1960s as drilling fluids to minimize downhole formation collapse and swelling. In addition, industry used foams to complete wells in low-pressure reservoirs. In the mid-1970s, operators began to use foams in hydraulic fracturing. By the turn of the century, foam fracturing accounted for more than 40 percent of all the hydraulic fracturing applications in North America, although this number has since declined. These applications have primarily used nitrogen, carbon dioxide or a binary mixture of these two gases to create the foam. While natural gas foams have been discussed in patents, no field application is known at this time.

SwRI developed a test setup to demonstrate the feasibility of using a natural gas foam as a hydraulic fracturing fluid. For the test scenario, the team used LNG, heaters and pumps to create the natural gas foam. Instrumentation quantified the viscosity of the foam fluid and a “shear history” section replicated the time the foam would spend flowing down the well, to ensure that the foam was stable. 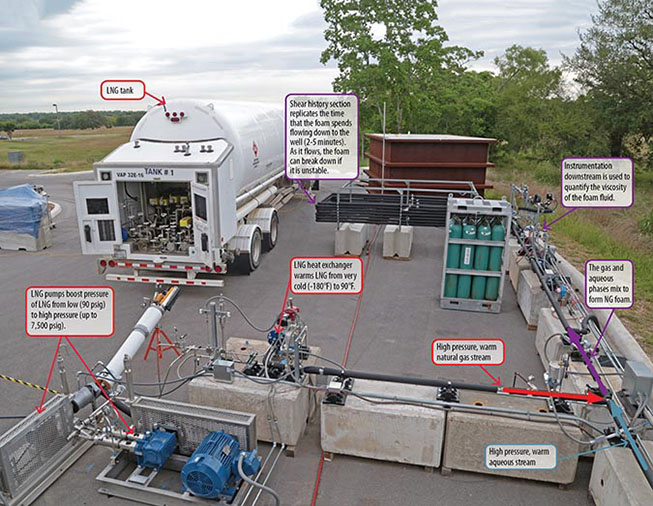 Foams have some unique properties that make them particularly well suited for hydraulic fracturing. For one, foams can minimize formation damage in water-sensitive reservoirs. In certain formations, water can swell the rock that contains the trapped hydrocarbons, which impedes oil and natural gas recovery from the reservoir. Reducing the water content of the fracturing media minimizes this type of damage. Another benefit is that after fracturing, the compressed gas in the foam expands and helps to rapidly unload the fracturing fluid from the well. Studies have shown that wells fractured with foam clean up faster than wells treated with gelled aqueous fluids.

While nitrogen- and carbon dioxide-based foams have been used in oil and gas production for more than five decades, the SwRI team is investigating key challenges and technology gaps using natural gas-based foams.

One of the main challenges relates to the processing equipment used on site to generate injection-ready natural gas foam. To date, all other fracturing methods have liquid assets trucked to the site and then pressurized by positive displacement pumps to the required injection pressure. For N2 and CO2 foams, positive displacement pumps designed for cryogenic temperatures pressurize the liquefied gases before heating them to a gaseous state. To create foam from the natural gas available at the wellhead, another process is needed to pressurize natural gas before combining it with a significantly reduced amount of water. SwRI engineers and their government and industry collaborators developed and analyzed six processes to prepare natural gas at supply conditions to create high-pressure, natural gas foam. In these analyses, the most straightforward process considered used multiple stages of compression equipment to boost the gas pressure from 500 pounds per square inch (psi) to a final discharge pressure of 10,000 psi. The other five processes analyzed by the team used liquefaction cycles, where the natural gas is first liquefied and then pressurized using typical cryogenic pumps.

Liquefied gas has been cooled and/or compressed to turn gaseous elements into liquids.

SwRI engineers compared the compression cycle and the liquefaction cycles based on efficiency, safety and process footprint criteria, determining that the compression cycle was best suited for onsite applications. While compressors needed to achieve this process are commercially available today, making a mobile version for use at well sites will require significant additional development efforts. 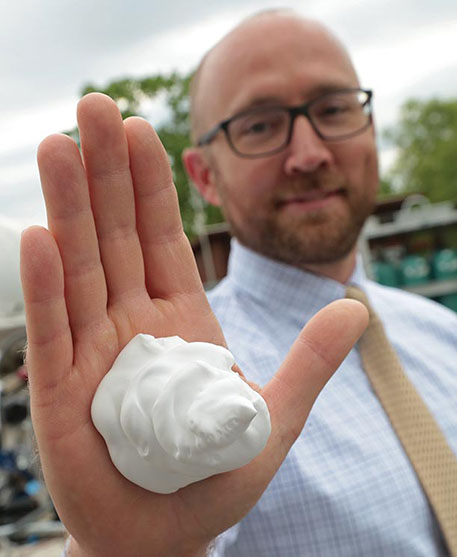 Shaving cream is a much lower pressure analog for natural gas foams that could significantly decrease water use in hydraulic fracturing production wells. 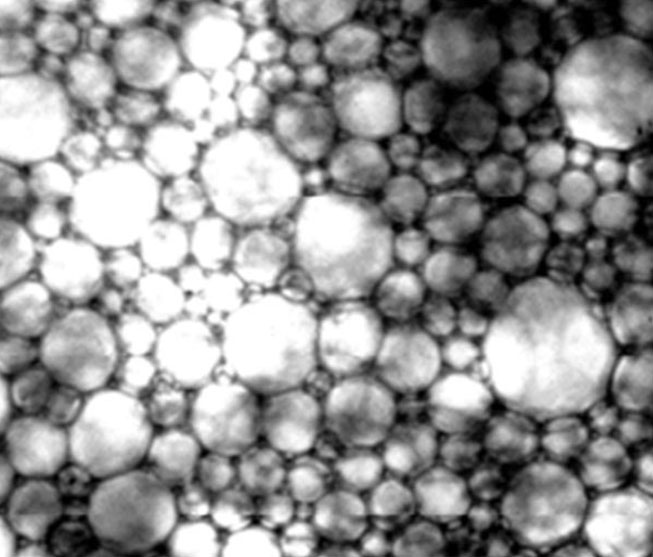 With that in mind, SwRI engineers designed and constructed a pilot-scale test facility to generate high-pressure natural gas foam and evaluate its performance in comparison to other fracturing media. SwRI engineers designed the test facility to replicate field conditions and mixing methods. Under these realistic operating conditions, the project team can generate reliable data on natural gas foam rheology, or flow properties, and evaluate how best to create a consistent natural gas foam that can survive the harsh, downhole conditions.

Rheology is the study of material flow and deformation under applied forces.

These laboratory tests have provided some important insights. First and foremost, SwRI demonstrated that stable, natural gas-based foam can be created using standard chemicals and methods currently employed by the industry for foam fracturing. Furthermore, the properties of the foam suggest that it is appropriate for use as a fracturing fluid.

SwRI has demonstrated that natural gas-based foams are a viable alternative to the conventional, water-based fracturing methods used almost exclusively in industry today. The foams created at SwRI’s pilot-scale facility are expected to provide the same beneficial qualities as other fracturing foams while making use of an abundant natural resource that is available near the wellhead. SwRI engineers also have demonstrated that a simple compression process using machinery available today is an optimal method to take onsite natural gas and prepare it for fracturing applications.

Still, more work needs to be done. Hydraulic fracturing in North America’s unconventional reservoirs is not a “one-size-fits-all” type of application. Reservoir characteristics, locally available resources and site-appropriate hydraulic fracturing techniques vary widely in different geographic locations and geologic formations. More work is needed to identify where and when fracturing with natural gas-based foams is the best option.

Perhaps the main area for further investigation is determining whether using natural gas-based foams can provide any production benefits. In other words, can natural-gas foam improve oil and gas recovery when compared to water-based treatments? Currently, reservoir recovery rates in North America are surprisingly low, ranging from 10 to 20 percent. So somewhere between 80 and 90 percent of the hydrocarbons remain locked underground, providing tremendous possibilities for improvement. Previous studies that compared production from wells fractured with foams to similar wells fractured with conventional fluids have been inconclusive. In some cases, no statistically significant difference in production was observed while in other cases, wells fractured with foams had significant production improvements. As such, the production advantages of natural gas foams versus water-based media need further investigation. To this end, SwRI sees the need for field demonstrations to measure potential benefits of natural gas-based foams in real-world oil and gas production.

It is an exciting time for the oil and gas industry. The challenges with accessing the vast hydrocarbon resources trapped in unconventional reservoirs in an efficient and environmentally prudent manner are driving real innovation. The SwRI team has demonstrated that alternatives to the conventional methods exist, and it’s likely that many more are on the horizon… something to think about over your next latte.