In October 1948, a lethal haze descended on Donora, Pennsylvania. Meteorological conditions had trapped pollutants that normally escaped the city, blanketing the streets in gray smog. Over the five-day duration, almost half of the town’s 14,000 population suffered from severe respiratory or cardiovascular distress, and 40 people died. While this incident was extreme, it reflected a worldwide trend. Air pollution had become a harsh consequence of the industrial age.

Then in the 1950s, a California researcher linked automotive emissions with air pollution for the first time, revealing the role transportation played in urban air quality. In 1970, Congress passed the Clean Air Act, requiring a 90 percent reduction in emissions in new vehicles by 1975. Some of those reduction techniques were achieved in the combustion process. By the 1980s, sophisticated catalysts and other “aftertreatment” systems were introduced to treat post-combustion gases prior to release into the environment.

Since then, increasingly strict emission and fuel efficiency standards have required progressively complex engine and exhaust aftertreatment control technologies. Today’s consumers demand reduced costs and increased product reliability and robustness for all phases of vehicle ownership. The combination of these challenges has vastly expanded the level of effort required to bring new engine systems to market. Product development cycles have increased, along with their associated costs.

DETAIL
The principal air pollutants produced by fossil-fuel engines are carbon monoxide, oxides of nitrogen, unburnt hydrocarbons and particulate matter. These substances or “species” not only contribute to smog and haze but also have human health effects.

The core of SwRI’s ECTO-Lab facility is a fully automated, multifuel burner system designed to provide the thermal energy and chemical composition of automotive exhaust gas streams. Over the past 20 years, SwRI engineers have developed the burner system to provide controlled combustion of gasoline, diesel, natural gas and propane fuels. The SwRI facilities include six subsystems that provide additional testing capabilities. The burner system is available for purchase and installation at client facilities, and additional modules can be added on an as-needed basis to enhance exhaust gas composition control. More than a dozen patents support SwRI’s cost-effective evaluation of full-size aftertreatment components and emission control systems.

The ECTO-Lab facility requires a robust control strategy to accurately replicate the complex and highly transient emission profiles of internal combustion engines. To address this challenge, SwRI engineers leveraged its successful engine control technology and adapted a pioneering model-based controller to manage ECTO-Lab combustion modes. The result is a highly transient, highly reproducible system that can replicate the exhaust gas conditions for “Any Engine, Anytime, Anywhere™.” 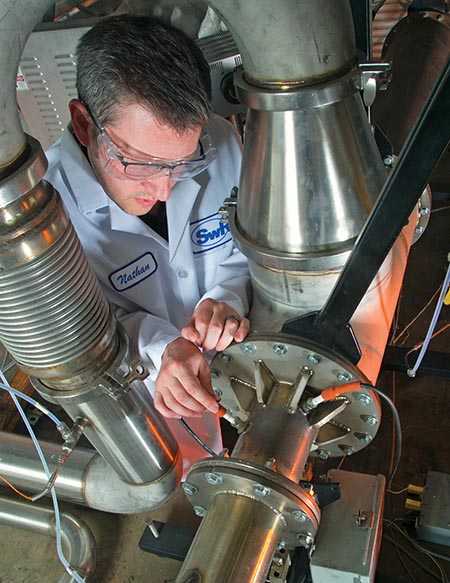 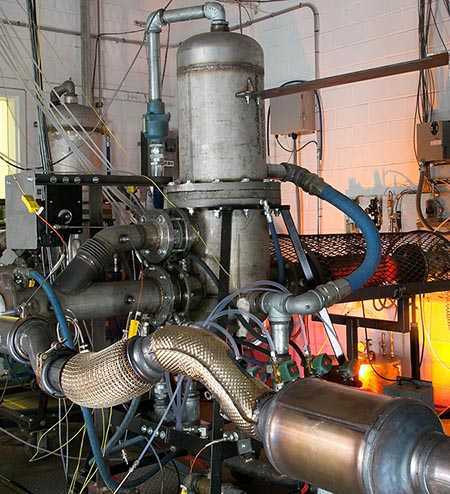 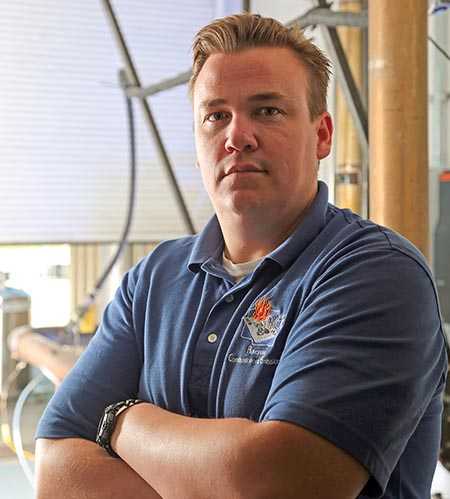 DETAIL
The “size” of an engine is typically measured by “displacement.” Displacement is the combined total volume of all the cylinders in an engine. For instance, an engine with four 569-cubic-centimeter cylinders has a displacement of 2,276 cc, which rounded up is referred to as a 2.3-liter engine. Larger engines are typically more powerful but use more fuel.

The ECTO-Lab burner system fills a critical technical gap in the catalyst and aftertreatment development area. Prior to its development, OEMs and suppliers relied on synthetic gas benches for fundamental catalyst testing. These bench tests allow full control over the gas stream composition and provide rudimentary understanding of catalyst behaviors and reaction mechanisms.

However, bench results do not accurately reflect the performance of full-size aftertreatment systems. The three-dimensional impact of flow, thermal and compositional distribution in aftertreatment systems necessitates quantifying the performance of whole components. Synthetic gas benches are also limited by their ability to replicate the transient behavior of gas flow, system warm-up and heat transfer effects.

Due to these limitations, laboratory synthetic gas benches are typically used for catalyst research and benchmarking and to quantify kinetic behavior such as catalyst deactivation, poisoning and so on. In engine test stands, full-sized catalyst and aftertreatment system evaluations can capture three-dimensional and transient effects not possible with pilot-scale bench tests. While engine test stands are useful, they have practical limitations, resulting in incomplete datasets and, ultimately, reduced understanding of overall system performance.

SwRI’s ECTO-Lab facility includes a universal engine exhaust gas simulator that accurately and precisely replicates exhaust gas composition for a variety of internal combustion engines. The current configuration can simulate exhaust gas flow rates as low as 10 kilograms per hour and as high as 3,250 kg/hr. This equates to engines from approximately 1.5 L to 20 L or about 100 to 1,000 horsepower. In addition to the wide range of flow capability, the system offers an impressive range of temperature control, replicating cold-start conditions and ambient temperatures while also creating exhaust gas temperatures in excess of 1,100°C to rapidly accelerate hydrothermal aging of catalyst components.

The ECTO-Lab facility features unique, SwRI-developed stoichiometric burner technology that generates thermal energy to evaluate catalysts. Under stoichiometric combustion conditions, oxygen reacts with fuel at the point when all the oxygen is consumed and all the fuel is burned, generating little to no NOx, hydrocarbon and carbon monoxide emissions.

The combustor not only burns hydrocarbon fuels but also breaks down nitrogen-laced fuel components. The thermal decomposition/oxidation of these compounds provides independent and controllable generation of NOx emissions. This control is one of the most beneficial capabilities of the ECTO-Lab system for diesel and lean-burn aftertreatment system development. By controlling NOx emissions, the system operates as an engine exhaust simulator, or as a synthetic gas bench, but with many of the benefits provided by full-scale engine testing. 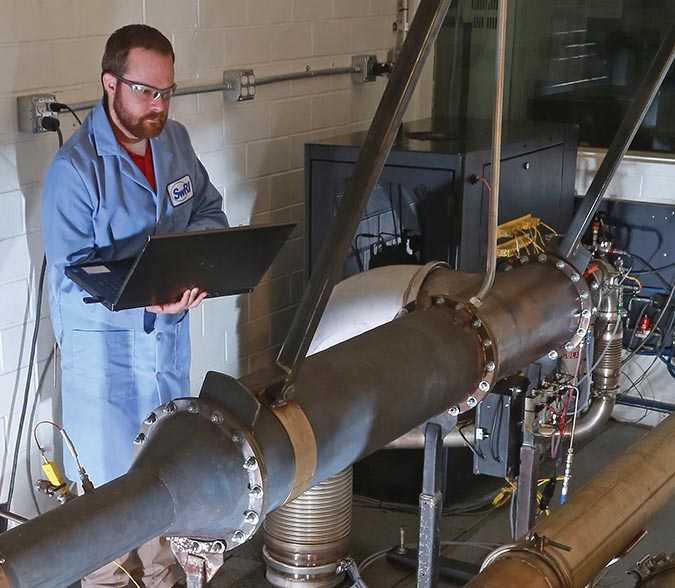 SwRI’s newest ECTO-Lab system is capable of producing exhaust streams with flow rates of up to 3,250 kg/hr. 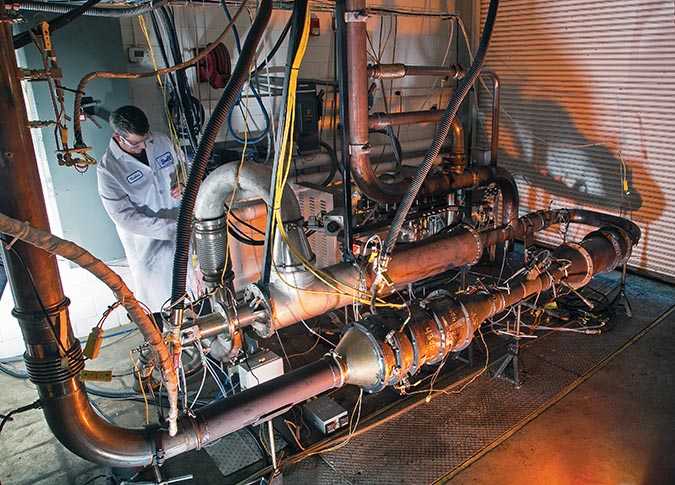 The ECTO-Lab system can evaluate the performance of complete aftertreatment systems, as well as individual components.

In the ECTO-Lab facility, the base burner is outfitted with six modules that provide additional capability and control. These subsystems include a water-to-air heat exchanger and an auxiliary hydrocarbon injector as well as dilution air, dilution N2, nitroethane/nitromethane combustion, and steam generation modules. If an organization wishes to purchase and install ECTO-Lab technology, it can be acquired on a module-by-module basis to provide the desired capabilities. These modules control parameters such as exhaust flow rate, temperature, oxygen concentration from 0–15 percent, NOx emissions from 0–1,200 parts per million, and hydrocarbon emissions from 0–10,000+ ppm. The ECTO-Lab system provides a wider range of control than is possible with conventional engine tests, while delivering the complex exhaust gas stream needed to develop and evaluate full-sized emission aftertreatment systems.

The water-to-air heat exchanger and dilution modules are critical to controlling the temperature and oxygen concentration in the exhaust gas stream. The water-to-air heat exchanger supports stoichiometric or fuel-rich operating conditions, while maintaining independent temperature control. This capability is critical for aging and evaluating components such as three-way catalysts and lean NOx traps, systems subject to both stoichiometric and fuel-rich exhaust streams in service. The dilution module also provides fresh air and/or nitrogen to the exhaust gas stream to simulate lean-burn combustion conditions. The combination supports conventional spark-ignited stoichiometric engines and compression-ignited lean-burn engines. The net result is a single test facility capable of simulating exhaust gas conditions for a limitless number of engines.

One of the most recent advancements to the ECTO-Lab facility is the ability to control the concentration of specific hydrocarbons present in the exhaust gas stream. This capability is increasingly important for light-duty applications, where hydrocarbons are regulated as stringently as NOx emissions. Controlling the specific hydrocarbon components is important because different species have varying levels of reactivity. To accurately quantify the performance of emission control devices, it is imperative that aftertreatment components or systems be tested in an exhaust gas stream that represents actual operating parameters.

The ECTO-Lab burner-based system is more capable than a synthetic gas bench or engine test stand. In a synthetic gas bench, the hydrocarbon mixture is, for practical limitations, simplified to one or two components. For the engine test bench, the hydrocarbon mixture is complex, but is typically constrained by the choice of engine hardware and/or operating condition. With the ECTO-Lab system, engineers can easily and cost-effectively control complex hydrocarbons to quantify the impact of these profiles on catalyst performance. The system controls speciation with all fuels, including diesel and gasoline.

A driving cycle, a set of vehicle speed points over time, is used to assess fuel consumption and emissions. Transient cycles have many speed variations, typical of on-road driving conditions. ECTO-Lab control technology can replicate the emission profiles of engines operated in highly transient drive cycles, such as the light-duty and heavy-duty federal transient protocol (FTP-75 and HD-FTP). This transient capability means SwRI’s burner-based system is more than just a full-size synthetic gas bench. With this transient capability, the technology supports full-size aftertreatment system and control testing.

ECTO-Lab evaluations increase efficiency. One of the biggest challenges with today’s emission regulations is developing emission system cold-start strategies and control. That’s because most tailpipe emissions are generated immediately after turning the ignition, when the engine and aftertreatment systems are cold. Once cars warm up, they have to travel hundreds of miles to produce the amount of pollutants emitted in the first 60 seconds of operation. With conventional engine tests, the engine and aftertreatment systems must be “cold soaked” in low temperatures for eight hours prior to a cold-start test. Because the ECTO-Lab burner-based system has no engine, only the aftertreatment system must be cooled down, and SwRI has developed rapid-cooling strategies. This allows hourly cold-start evaluations, instead of every eight hours with engine-based tests. This increases calibration throughput by a factor of eight, significantly reducing development timelines.

Acknowledgements: Some of the figures are also being published in ECTO-Lab articles in MTZindustrial and SAE’s Truck and Off-Highway Engineering magazines.