NASA has extended the Juno mission to explore Jupiter through September 2025, expanding the science goals to include the overall Jovian system, including the planet and its rings and moons. In addition to continuing to explore the solar system’s largest planet, the planetary orbiter will rendezvous with three of the most intriguing Jovian moons.

Since its first orbit in 2016, Juno has rewritten the textbooks about the massive gas giant. The extended mission will answer fundamental questions that arose during Juno’s prime mission.

Juno was proposed in 2003 by a team led by SwRI’s Dr. Scott Bolton and launched in 2011. As the prime mission was wrapping up, the spacecraft and its instruments remained healthy, allowing for a mission extension beginning in August 2021. This expanded mission includes 42 additional orbits including close passes over Jupiter’s north polar cyclones and flybys of the Galilean moons Ganymede, Europa and Io, as well as the first extensive exploration of Jupiter’s ring system.

The extended mission’s science campaigns expand on discoveries Juno has already made about Jupiter’s interior structure, internal magnetic field, magnetosphere and atmosphere, including its polar cyclones and auroras. With this extension, Juno essentially has become its own follow-on mission. Close-up observations of the poles, radio occultations, Galilean moon flybys, and focused magnetic field studies combine to make a new mission, the next logical step in the exploration of the Jovian system.

The natural evolution of Juno’s polar orbit around the gas giant provides new science, and the extension was crafted to conserve the mission’s single most valuable resource — fuel. Gravity assists from the multiple flybys of Jupiter’s moons will steer the spacecraft through the Jovian system while providing a wealth of science opportunities.

As the prime mission was coming to a close, Juno buzzed its largest moon Ganymede and scientists made several interesting new discoveries about Jupiter’s auroras, stratospheric winds and meteorite impacts as well as finding evidence for the source of Earth’s zodiacal lights, vertical phenomena seen at dusk and dawn.

The science team has received the first images from NASA Juno’s June 7, 2021, flyby of Jupiter’s giant moon Ganymede. The photos — one from the Jupiter orbiter’s JunoCam imager and the other from its Stellar Reference Unit star camera — show the surface in remarkable detail, including craters, distinct dark and bright terrain, and long structural features possibly linked to tectonic faults.

The spacecraft’s JunoCam visible-light imager captured almost an entire side of the water-ice-encrusted moon, providing a color portrait of Ganymede at a resolution of about 0.6 miles (1 kilometer) per pixel.

In addition, Juno’s Stellar Reference Unit, a navigation camera that keeps the spacecraft on course, provided a black-and-white picture of Ganymede’s dark side (the side opposite the Sun) bathed in dim light scattered off Jupiter. Image resolution is between 0.37 and 0.56 miles (600 to 900 meters) per pixel.

The solar-powered spacecraft’s encounter with the Jovian moon is expected to yield insights into its composition, ionosphere, magnetosphere and ice shell while also providing measurements of the radiation environment that will benefit future missions to the Jovian system. 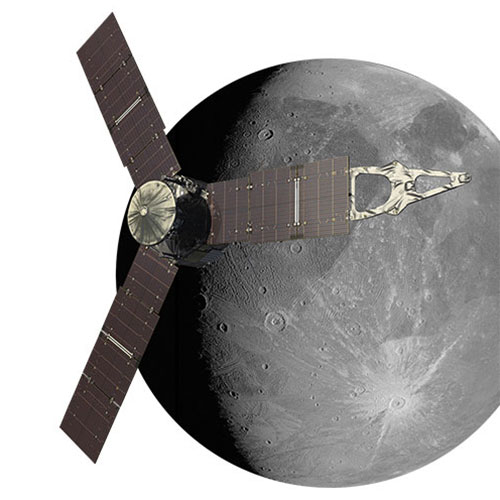 The Juno spacecraft flew closer than any other in more than two decades to Jupiter’s largest moon Ganymede, offering dramatic glimpses of the icy orb. 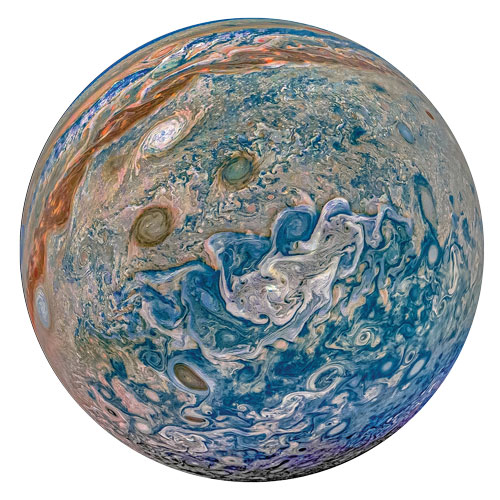 Jupiter inspires artists and scientists with its beauty. In this image, south is up, and citizen scientist Prateek Sarpal used enhanced color to evoke an exotic marble. The original image was captured by JunoCam on Juno’s 22nd close pass by Jupiter on Sept. 12, 2019.

A team led by SwRI’s Dr. Vincent Hue thinks these newly discovered faint ultraviolet features originate millions of miles away from Jupiter, near the Jovian magnetosphere’s boundary with the solar wind. The solar wind is a supersonic stream of charged particles emitted by the Sun. When they reach Jupiter, they interact with its magnetosphere in a way that is still not well understood.

Previous observations with the Hubble Space Telescope and Juno have allowed scientists to determine that most of Jupiter’s powerful auroras are generated by processes essentially related to the planet’s rapid 10-hour rotation. However, on numerous occasions, UVS has detected a faint type of aurora, characterized by rings of emissions expanding rapidly with time.

The high-latitude location of the rings indicates that the particles causing the emissions are coming from the distant Jovian magnetosphere, near its boundary with the solar wind. In this region, plasma from the solar wind often interacts with the Jovian plasma in a way that is thought to form “Kelvin-Helmholtz” instabilities. These phenomena are associated with shear velocities, such as at the interface between two fluids moving at different speeds. Another possible candidate to produce the rings is dayside magnetic reconnection events, where oppositely directed Jovian and interplanetary magnetic fields converge, rearrange and reconnect.

Both of these processes are thought to generate particle beams that could travel along the Jovian magnetic field lines, to eventually precipitate and trigger the ring auroras on Jupiter. The Juno extended mission will capture and study more of these faint transient events to isolate the causes. For more information, see the JGR Space Physics paper about this research at doi.org/10.1029/2020JA028971. 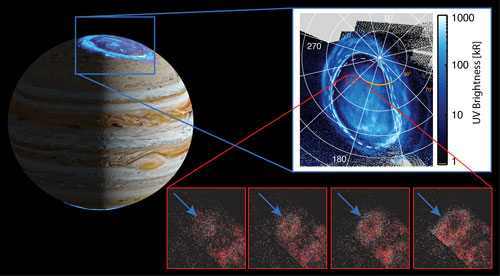 Working with a team led by French astronomers, SwRI scientists helped identify incredibly powerful winds in Jupiter’s middle atmosphere for the first time. The team measured molecules exhumed by the 1994 impact of comet Shoemaker–Levy 9 to trace winds in excess of 900 miles per hour near Jupiter’s poles.

Jupiter’s distinctive orange and white bands of swirling clouds allow scientists to track winds in the planet’s lower atmosphere, and the SwRI team members have particular expertise in the vivid Jovian aurora, associated with strong winds in the gas giant’s upper atmosphere. Until now, wind patterns in the cloudless stratosphere, between the two atmospheric layers, have eluded observation.

Previous studies predicted that upper-atmosphere winds would decrease in velocity and disappear well before reaching as deep as the stratosphere. The new ALMA data beg to differ, finding surprisingly strong stratospheric winds near Jupiter’s pole. Using 42 of ALMA’s 66 high-precision antennas, the team measured the Doppler shift of hydrogen cyanide molecules — tiny changes in the frequency of radiation emitted by the molecules — caused by the winds in this region of the planet.

In addition to the surprising polar winds, the team also confirmed the existence of strong stratospheric winds around the planet’s equator. The jets spotted in this part of the planet have average speeds of about 370 mph. For more information about this research, see the Astronomy & Astrophysics paper at doi. org/10.1051/0004-6361/202140330. Dr. Thibault Cavalié of the Laboratoire d’Astrophysique de Bordeaux is the lead author. 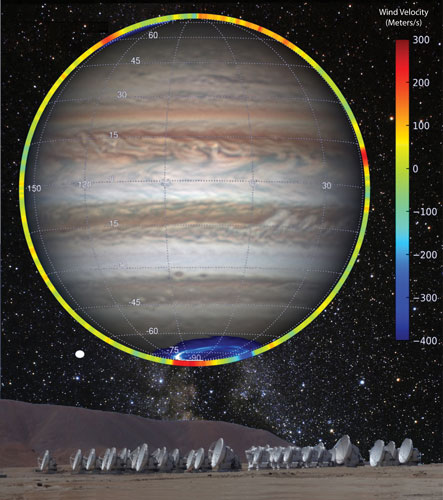 SwRI scientists collaborated on a French-led study that identified remarkably powerful polar winds in Jupiter’s stratosphere, expressed in this March 22, 2017, composite image. Using ALMA observations, the team discovered that the most remarkable jet (in red and blue) aligns with Jupiter’s southern aurora, studied with the SwRI-led UVS instrument. Wind speeds were measured up to 400 meters per second (900 miles per hour). 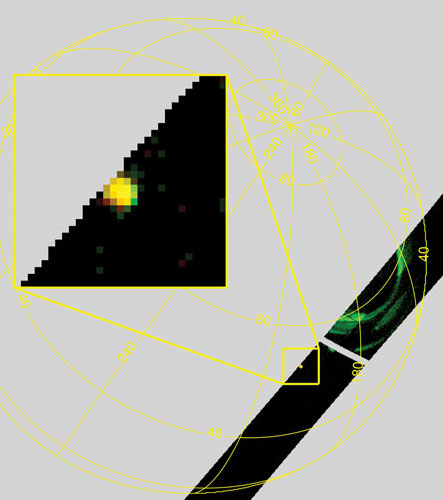 From aboard the Juno spacecraft, an SwRI-led instrument observing auroras serendipitously spotted a bright flash above Jupiter’s clouds. The UVS team studied the data and determined that they had captured a bolide, an extremely bright meteoroid explosion in the gas giant’s upper atmosphere.

Impacts themselves are not rare, but they are short-lived, so it is relatively unusual to see them. Only larger impacts can be seen from Earth, and a telescope must be pointed at Jupiter at exactly the right time and place. The primary goal of the UVS instrument is to study the morphology, brightness and spectral characteristics of Jupiter’s auroras as the spacecraft cartwheels close to the planet every 53 days. Each time the spacecraft spins around its own axis, UVS observes a swath of the planet. In addition to the auroras, these observation swaths occasionally show short-lived, localized ultraviolet emissions outside of the auroral zone, including this singular event on April 10, 2020.

The flash lasted at least 17 milliseconds but not much more, as it was not seen on an earlier or later spin. The team, led by SwRI’s Dr. Rohini Giles, initially thought this bright flash might be a Transient Luminous Event (TLE), an atmospheric phenomenon caused by lightning activity; however, it was different in two key ways. It lasted much longer than a TLE, which is only a few milliseconds long, and it had very different spectral characteristics. This bolide event had a smooth “black-body’’ curve, which is what is expected from a meteor. Based on the brightness of the flash, scientists estimated it was caused by an impactor with a mass of 550–3,300 pounds.

Impacts from asteroids and comets can have a significant impact on Jupiter’s stratospheric chemistry. For example, 15 years after the impact of comet Shoemaker-Levy 9, it is still responsible for 95% of the planet’s stratospheric water. Continuing to observe impacts and estimating the overall impact rates is an important element of understanding Jupiter’s composition. For more information, see the Geophysical Research Letters paper about this research at doi/full/10.1029/2020GL091797.

Sunlight reflected by a cloud of tiny dust particles orbiting the Sun creates zodiacal light, a faint column of light on the Earth’s horizon before dawn or after dusk. Previously, scientists thought asteroids and comets from the outer solar system brought this dust into the inner region. Now, a team of Juno scientists argues that Mars may be the source.

An instrument aboard the Juno spacecraft detected dust particles slamming into the spacecraft during its journey from Earth to Jupiter. The impacts provided important clues to the origin and orbital evolution of the dust, resolving some mysterious variations of the zodiacal light.

Examining anomalies in star tracker data, researchers calculated the apparent size and velocity of objects in the images, realizing that dust grains smashing into Juno solar arrays at about 10,000 miles per hour were chipping off submillimeter pieces. Fortunately, Juno’s solar arrays escaped harm because the dust hit the backside of the arrays.

The debris tracked interplanetary dust particle impacts, allowing researchers to compile a distribution of dust as the spacecraft traveled to Jupiter. Most dust impacts were recorded between Earth and the asteroid belt. Before now, scientists have been unable to measure the distribution of these dust particles in space. Juno scientists determined that the dust cloud ends at Earth because Earth’s gravity sucks up all the dust that gets near it, creating zodiacal light.

The outer edge of the dust cloud ends just beyond Mars, where the influence of Jupiter’s gravity acts as a barrier, preventing dust particles from crossing from the inner solar system into deep space and vice versa. Because the only object in this orbit is Mars, scientists inferred that the Red Planet is a source of this dust. How dust escapes the grip of gravity on Mars, the dustiest known planet, remains a mystery. For more information, see the JGR Planets paper about this research at doi/10.1029/ 2020JE006509. The lead author is Dr. John Leif Jørgensen, a professor at the Technical University of Denmark. 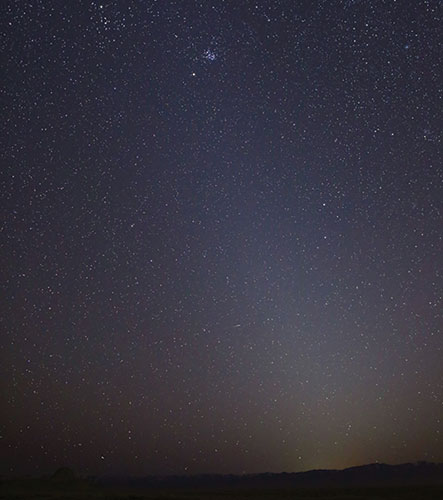 This photo shows the zodiacal light as it appeared on March 1, 2021, in Skull Valley, Utah. The Pleiades star cluster is visible near the top of the light column. Mars is just below that.

Questions about this story or Planetary Science? Visit missionjuno.swri.edu.