Imagine turbocharging your body’s own defenses, using customized cells to attack a specific disease or repair an injury. That type of regenerative therapy could revolutionize how we treat diseases and degeneration using a patient’s own immune or stem cells to fashion targeted treatments. For instance, a patch of stem cells could be used to repair a heart valve. Or T-cells in our immune system could be modified to seek out and destroy cancer cells. However, the promise of personalized, regenerative medicine is limited, in part, by scale. For example, only about 100,000 cells with regenerative potential can be harvested in an autologous or self-donation, but effective treatments often require a billion cells for a single dose, requiring a 10,000-fold increase for clinical applications.

An autologous donation is when blood, T-cells or stem cells are harvested from a patient for their own use in a surgical procedure or for infusion therapy.

SwRI is working with collaborators to create a standalone, programmable closed-loop cell expansion platform about the size of a minifridge to continuously propagate cells using our novel bioreactors. Much like a single-serve coffee maker can brew a variety of beverages using K-cup® pods, this turnkey perfusion- based “cell maker” system can propagate a variety of different types of cells and cell-derived biologics using SwRI’s single-use bioreactors. This cell expansion platform will be integrated into new drug manufacturing systems expected to have a high impact on advancing personalized, regenerative medicine.

Dr. Jian Ling is an Institute scientist who has been involved in biomedical research and medical device development for over 25 years. His research interests include the development of biomaterials, tissue engineering scaffolds, bioreactors and stem cell-based cell constructs for wound healing and regenerative medicine. 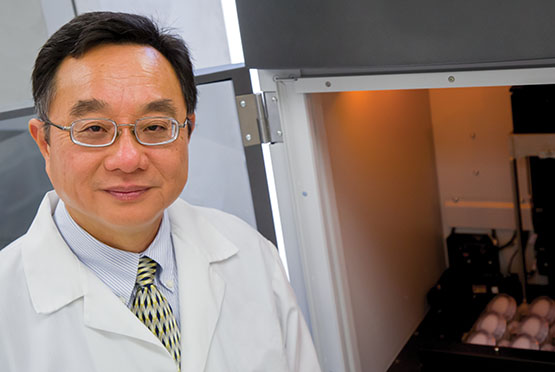 SwRI has funding from the National Institute for Innovation in Manufacturing Biopharmaceuticals (NIIMBL), the Advanced Regenerative Manufacturing Institute (ARMI), the Medical Technology Enterprise Consortium (MTEC) and the Food and Drug Administration (FDA) to demonstrate the technology by propagating T-cells for immunogenic therapy of cancers and mesenchymal stem cells (MSC) to treat age-related degenerative diseases.

The bioreactor can grow “suspension” cells, such as disease-fighting white blood cells known as T-cells that can be engineered into T-cells with chimeric antigen receptors (CAR). These CAR T-cells can identify and kill cancer cells. The device also expands “adherent” cells, which include stem cells and primary cells such as those from bone, skin or muscle. The system also can manufacture cell-derived biologics to support gene therapy, therapeutic exosome, recombinant protein, and cell-based vaccine applications.

Using a 3D commercial printer, we created production-ready bioreactors of different sizes with the same internal structure. This maintains the cell expansion process from discovery to development and manufacturing, reducing the costs involved to move into the commercialization phase. The device is made of a biocompatible material used in many FDA-cleared or -approved medical devices. Its low cost makes single-use bioreactors feasible. 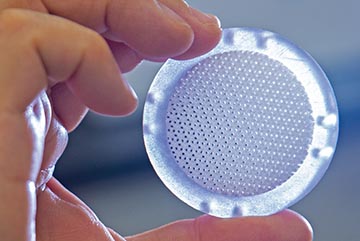 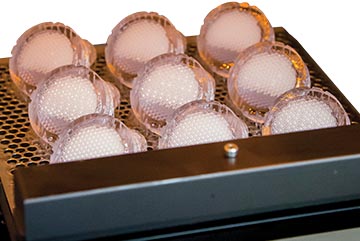 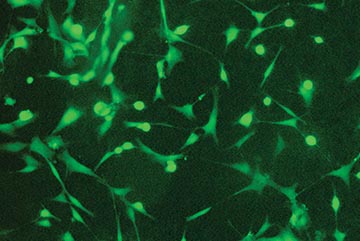 SwRI is using the bioreactors to propagate mesenchymal stem cells, which are “multipotent” with the capacity to self-renew by dividing and developing into multiple specialized cell types associated with specific tissues or organs. Most adult stem cells are multipotent stem cells.

The design significantly increases the cell production capacity while maintaining the traditional monolayer cell culture during cell expansion. It reduces the shear force cells experience during production, while also preventing cell-to-cell aggregation and clumping that reduces clinical functionality and yield of cells. In addition, the bioreactor is designed to operate in a closed-loop automated process, reducing cleanroom requirements and costs.

Injection molding describes a manufacturing technique that melts raw plastic and injects it into a mold, where it cools and solidifies into a final part.

The unique structure of the new bioreactor is difficult to fabricate using traditional injection molding techniques. SwRI has developed a proprietary technology to produce the bioreactor with a smooth surface suitable for cell growth. We are currently establishing cleanroom fabrication and radiation sterilization procedures for the bio- reactor to meet the device quality and safety levels needed for clinical cell manufacturing.

We are developing a turnkey, standalone system about the size of a minifridge as the demonstration perfusion unit. This includes a temperature-controlled incubator and a pump — like a heart — to deliver media to the cells inside the bioreactor. An oxygenator functions like our lungs, refreshing the oxygen concentration and removing carbon dioxide based on the “breathing rate” of the cells. We conducted computational fluid dynamics simulations to demonstrate the media perfusion flow profile across the bioreactor. We enhanced the system with a programmable controller to automate the nutrition and oxygen delivery for cell propagation. And we are integrating the bioreactor with tubing, a media storage bag and a waste collection bag to form a closed, single-use package that can be installed into the perfusion unit.

Current cell manufacturing is a complex, labor-intensive process that can cost up to $500,000 for a single treatment of personalized T-cell immunotherapy. These “open” processes require a high-cost Class 100 cleanroom environment. For CAR T-cells, magnetic microbeads are used for T-cell purification, activation and expansion. As the cells are harvested, the beads must be separated from the cells. However, it is difficult to completely remove the beads from the cells, so they often are infused into a patient along with T-cells, resulting in a potential safety issue. In contrast, our bioreactor does not require microbeads in T-cell manufacturing. 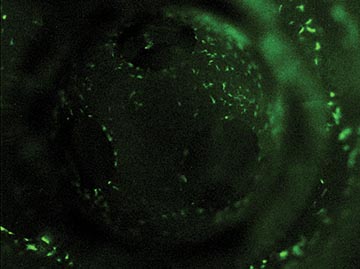 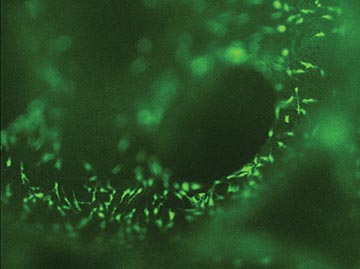 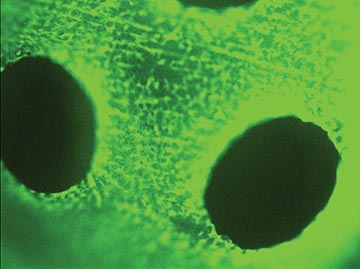 These images show the propagation of stem cells in the bioreactor in a week’s time. Live cells are shown in green fluorescence.

For CAR T-cell therapy, immune cells are collected from a patient and genetically modified in the laboratory. Millions of the CAR T-cells are grown in the laboratory and infused back into patients, binding to antigens on the cancer cells and killing them.

Equipment to fabricate a larger-sized 250,000 cm2 surface area bioreactor with the capacity of growing 10 billion MSCs is commercially available. 3D printers that could produce even larger bioreactors for a 100 billion to 1 trillion MSC expansion are also feasible. We expect that the cell expansion processes developed for small- and medium-sized bioreactors can be directly scaled up to a larger-sized bioreactor if the linear perfusion flow rate and the bioreactor’s height remain the same, because the internal structure of the bioreactor does not change at different scales.

Advanced regenerative medicine therapies are exciting research topics, with more than 800 stem cell therapies currently in clinical trials. For these procedures, doctors either replace diseased or ineffective stem cells with healthy new stem cells or allow high-dose treatments for cancers and other conditions. These include autologous infusions, which use a patient’s own stem cells, as well as allogenic transplants, which use stem cells from a donor. 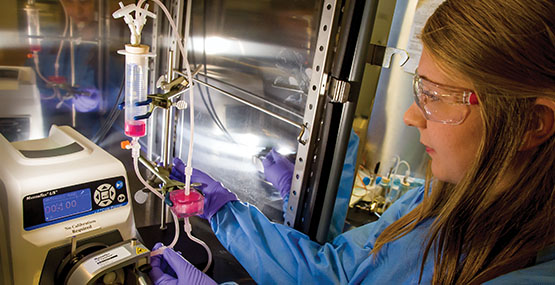 The SwRI team is assembling a perfusion controller system and optimizing the production processes to create a standalone, programmable closed-loop cell expansion platform about the size of a minifridge to continuously propagate cells using our novel bioreactors. SwRI’s novel-single use bioreactors are ideal for pump-driven perfusion flow-based cell cultures. Perfusion technology delivers nutrition and oxygen to cells to support growth. 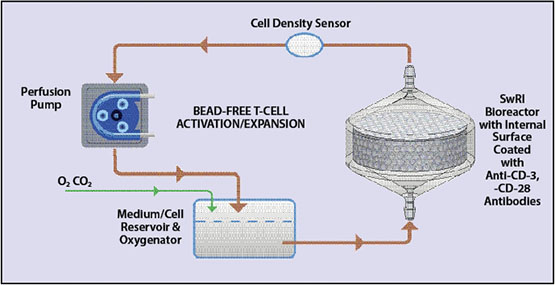 When complete, SwRI’s automated bioreactor-based system will offer a variety of cell culture surfaces based on specific needs. For example, three bioreactors with cell culture surface areas of 250, 2,500 and 25,000 cm2 can replace 125 manual-operation flasks, to propagate 1 billion cells. Currently the SwRI team is assembling the perfusion controller system and optimizing the production processes. We are establishing cleanroom fabrication and sterilization procedures for the bioreactor while demonstrating the capabilities for clinical cell manufacturing.

At the end of this program, a sterile fabricated bioreactor, integrated with a programmable perfusion system, will be available for clinical cell manufacturing. We will compare the bioreactor system with a commercially available microcarrier-based bioreactor to assess its performance. Lastly, we will demonstrate that it meets the cell expansion needs for mesenchymal stem cell expansion and MSC-derived exosome production in a clinical manufacturing environment.

Tailoring treatments to patients dates as far back as Hippocrates, the 400 B.C.-era physician often called the father of medicine. Today’s doctors are combining increased knowledge of the human genome with data-driven diagnostics to develop bio-based therapies that will be more effective and less likely to have harmful side effects. In turn, SwRI is developing devices and technology that can make growing cells and biologics more efficient and effective, enabling the practical use of tomorrow’s personalized, as well as regenerative, medicine.