Destroying chemical warfare agents is a complex and inherently risky process. Conventional demilitarization methods require tremendous amounts of water, and significant quantities of hazardous waste are often created as a byproduct. Transporting stockpiles to a destruction site is costly and precarious, adding significant hurdles to the process. How do you solve a problem with so many safety and logistical issues?

In 2015, the Defense Advanced Research Projects Agency (DARPA) initiated the Agnostic Compact Demilitarization of Chemicals (ACDC) program to address this complex dilemma. The program aims to develop portable technology to destroy chemical agents without using water or producing hazardous waste. Current eradication methods include thermal treatment or hydrolysis, processes that require significant amounts of water. In some remote locations, water can be a scarce commodity. DARPA envisioned a method that would incorporate a readily available, ubiquitous resource for the destruction process — soil. Afterward, any soil used in the destruction process must be nontoxic.

Southwest Research Institute responded to a DARPA solicitation and was awarded a contract to explore innovative methods to address the problem. SwRI proposed a novel process: burning chemical warfare agents (CWA) as fuel in an internal combustion engine. Then, resulting engine exhaust can be scrubbed free of acid gases using the alkaline chemistry of soils or, as the development progressed, other chemical techniques.

The initial estimated disposal cost for the U.S. stockpile of chemical weapons was $1.7 billion; however, this cost was greatly underestimated. In 2013, CNBC reported that the U.S. has spent $40 billion to date to destroy its chemical weapons.

Following World War II, nations around the world stockpiled chemical weapons during the Cold War arms race. In 1969, President Richard Nixon issued an executive order to halt U.S. production of chemical warfare agents, stating: “These steps should go a long way toward outlawing weapons whose use has been repugnant to the conscience of mankind.” In 1984, President Ronald Reagan declared the U.S. stockpile of chemical weapons obsolete and called for its destruction. The world soon followed suit. By the 1990s, most nations had signed the international Chemical Weapons Convention treaty, which outlaws chemical weapons and mandates the destruction of existing stores. However, the international community continues to face challenges in this area.

For this new venture, DARPA and SwRI’s chemistry and chemical engineering staff agreed that no water other than what is created in the destruction process could be used, and soil would be used to neutralize any hazardous byproducts. SwRI staff proposed an innovative concept — a system that could fit into a shipping container using an engine and locally sourced soils to destroy CWA on site without producing hazardous waste. 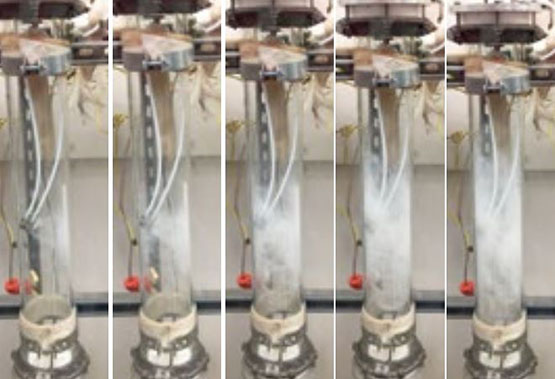 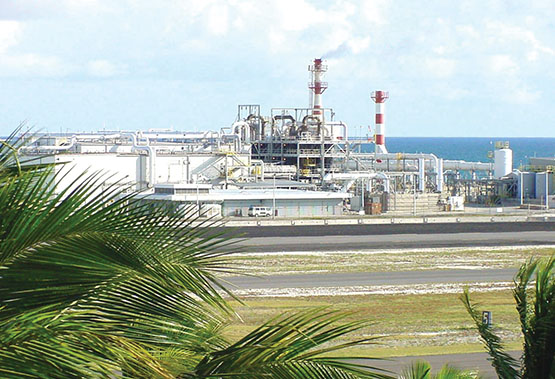 SwRI has been in the chemical demilitarization business for more than 30 years. Our staff provided chemical agent monitoring and laboratory services at the first large-scale demilitarization facility located on Johnston Island in the middle of the Pacific Ocean.

To achieve those goals, SwRI brought together a multidisciplinary team of scientists and engineers to brainstorm novel ideas to address the challenges. On Johnston Island, diesel generators powered the island facility, sparking interest in using an engine as the primary chemical destruction mechanism. In particular, engineers proposed using SwRI’s patented Dedicated Exhaust Gas Recirculation (D-EGR®) engine. Its design allows more complete combustion and reduced emissions, a great combination for CWA destruction. An SwRI chemical engineer suggested that the alkaline chemistry of most soils could scrub the acid gas exhaust an engine would produce burning CWA as fuel. But there were many challenges to such a novel approach.

DARPA’s production schedule was demanding, requiring a prototype demonstration in six months. To meet the challenge, the team focused on two objectives. First, the team needed to design and build a D-EGR engine front end with a soil-filled fluidized bed reactor back end. Second, the team needed to test the soil purifying scheme using an acid gas stream. While the hardware was under development, the soil testing hit “pay dirt.” The team demonstrated that local soil, taken right from the SwRI campus and high in limestone content, could efficiently scrub acid from exhaust gases. The project team characterized the capacity, limits and environmental boundaries to optimize soil scrubbing and then tested other types of soil. Meanwhile, the team was integrating the D-EGR engine with a soil-based fluidized bed reactor. This device passes a gas through a granular material at velocities high enough to create a chemical reaction. In this case, high-velocity exhaust gas is pumped into the soil, creating a fluidized environment that reacts with the acids and scrubs them from the exhaust stream.

Just ahead of DARPA’s six-month deadline, SwRI demonstrated the D-EGR engine using simulated CWA, delivering the resulting exhaust gases to a fluidized bed reactor for processing. The demonstration proved the concept — the engine burned the CWA simulant, and the exhaust leaving the soil scrubber system was normal engine exhaust, free of acid gases.

For two months after the initial demonstration, SwRI continued to optimize the system. The team introduced a soil-filled packed bed scrubber downstream of the fluidized bed reactor to increase acid gas scrubbing efficiency and capacity. SwRI scaled-up models for the soil-filled exhaust scrubbing system and identified CWA-simulant destruction limits for the D-EGR engine.

At this point in the development process, DARPA requested SwRI build its soil-based solid scrubber (S3) system as a modular back-end system — without the engine front end — for use downstream of a plasma torch system. Because this CWA destruction system had been under development for much longer than SwRI’s engine, it was considered at a higher “technology readiness level,” nearing the point where it could be tested with actual CWA.

In just eight months, SwRI designed, built and tested the soil-based modular solid scrubber system. Staff operated the S3 independent verification and validation (IV&V) testing of the integrated plasma torch and S3 combination using a CWA simulant. An independent third party oversaw the IV&V testing and considered the system an overwhelming success. S3 scrubbed 99.99997 percent of the acid gases emitted by the plasma torch, exceeding DARPA requirements. This demonstrated the effectiveness of the SwRI system and validated the modular approach of a mix-and-match front end — engine or plasma torch — and back end — a wet scrubber developed for the plasma torch system or SwRI’s dry solid scrubber system. 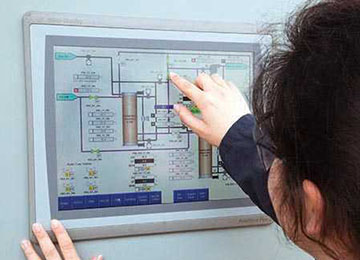 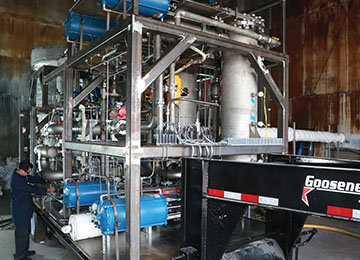 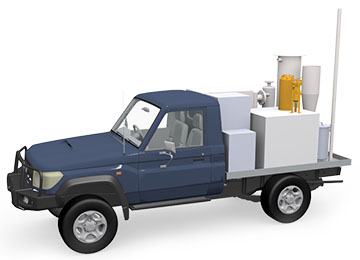 With the latest ‘drive-in’ design, the system can destroy approximately 10 gallons per hour at a munitions site without transport of agent or hazardous waste.

As the design and development of the technology evolved, the next version planned to use an industrial 16-liter diesel engine front end and a dump truck with soil in the bed serving as the packed-bed scrubber back end. This version was designed to have the capacity to consume 28 gallons of CWA an hour on a continuous basis. This system, if pursued, would have had the capacity to handle volumes similar to the Syrian CWA stockpile, on site, with a logistical footprint of only four vehicles. While this was viewed as impressive and achievable, the various government agencies needing CWA destruction capabilities were seeking smaller-scale tactical units.

To meet these needs, SwRI pivoted and focused on developing a smaller, single-vehicle tactical system. First, the team demonstrated that a small, conventional diesel engine had better throughput and scalability than the D-EGR engine. Then the Institute analyzed alternatives to consider for a smaller, tactical system that runs on CWA on site, and scrubs acid gases. Ultimately, the team determined that mobility demanded more efficient, lightweight scrubbing media than soil.

Moving forward, SwRI is designing and building a pickup-sized system that destroys agents using a 4.5-liter diesel engine in a pickup truck at a CWA storage site. An ammonia-based scrubber and particulate capture system will scrub acid gases from the vehicle exhaust stream. Once staff members have evaluated the system with CWA simulant, an independent third party will validate the system with CWA simulant. After successful verification and validation, the system will be shipped to a government facility for testing with actual CWA while the system is remotely operated by SwRI staff.

Following this final IV&V, the system will be ready for field testing and final upgrades for military deployment. If only limited numbers of systems are needed, SwRI may produce them. If many systems are required, then the SwRI team may work with a com- mercial partner for production. If the small, tactical unit is successful, the project team will revisit developing a system that could handle something on the scale of the 2014 Syrian CWA destruction.

In the end, the U.S. and its international counterparts would like to see all chemical warfare agent stockpiles — large and small — eliminated. SwRI technology could help achieve that goal.