Aerospace technology is incredibly complex and safety critical. Ground tests validate designs and engineering while flight testing ensures that systems meet government and industry standards. Flight test evaluations range from a single new system for an existing vehicle to the overall development and certification of a new aircraft. As such, testing can take a few weeks to many years and demands extensive resources. As the complexity and interoperability of aircraft systems have increased, so too has the complexity of flight testing and instrumentation and their associated costs.

Flight test instruments are typically small orange boxes that process data from sensors attached throughout the aircraft. A flight test instrumentation (FTI) program can track more than 100,000 parameters, ranging from gyroscope performance on autopilot to wing pressure at top speed.

To maximize the value of costly flight time, engineers often synchronize multiple test goals. When testing several articles per flight, any number of problems can affect not only the aircraft, but also flight test instrumentation. A problem on one test can trigger costly delays in subsequent tests. These challenges are exacerbated when flight test instruments operate on separate proprietary platforms, slowing the time it takes to switch test goals in real time. 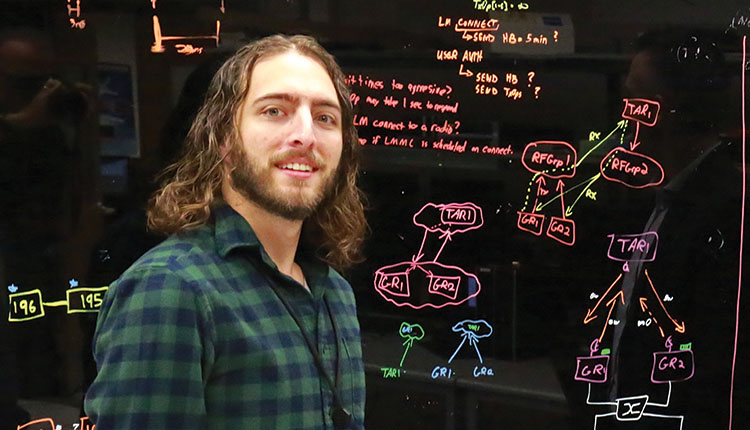 Flight test researcher Austin Whittington is the principal investigator of the DARPA BRASS project. He has particular experience in onstraints modeling and knowledge representation and is a research analyst in SwRI’s Intelligent Systems Division.

In light of these challenges, a seamless standard would benefit the entire industry. SwRI is working with the commercial aerospace industry and government agencies to address these challenges by developing standardized FTI software. Housed at SwRI’s Flight Test Technologies Laboratory in San Antonio, our team draws on years of experience helping instrument vendors and aircraft manufacturers develop flight test solutions.

SwRI’s unique expertise in this sector led it to become the lead integrator for the U.S. Department of Defense integrated Network Enhanced Telemetry program, or iNET. As iNET’s lead integrator, SwRI works with the DOD and aerospace stakeholders to develop a Metadata Description Language (MDL) that allows for standard configuration of all vendor hardware. A standard language helps test engineers work across multiple vendor devices, paving the way for flexibility in flight testing to adapt to changing conditions, such as inclement weather or equipment failures.

The iNET program focuses on improving vendor interoperability and enabling two-way telemetry to better manage numerous flight tests on multiple aircraft simultaneously. Scheduling flight tests at an Air Force base, for example, can be particularly challenging when as many as 30 aircraft are testing several systems at the same time.

With two-way communications and interoperable instruments, iNET enables real-time data gathering and dynamic scheduling, allowing engineers to switch a flight test goal if an instrument fails or extra flight time becomes available when another flight test is cancelled. If a flight encounters a problem with a test instrument or sensor, it may need to land for troubleshooting, causing delays from several hours to several days. Or suppose an aircraft is scheduled to fly over mountains to experience ice buildup on its wings to evaluate the system response. If the weather does not create the desired conditions, a normal plan would be to abort the test, land the plane and try again later. Under either of these scenarios, iNET could reconfigure the instrumentation in real time to perform a different set of tests or allow other flights to access extra flight time or telemetry bandwidth.

More recently, SwRI has leveraged its iNET work on a series of contracts with the Defense Advanced Research Projects Agency (DARPA) and the Air Force Research Laboratory. The project incorporates DARPA’s Building Resource Adaptive Software Systems (BRASS) technology to facilitate adaptations to technology changes and security updates over the next several decades.

By integrating BRASS into the standardized iNET configuration, SwRI engineers hope to develop a lasting solution to deal with rapid advances in technology affecting the commercial and military aerospace industries. In late 2018, SwRI received a second BRASS contract to integrate flight test standardization with the Army’s ground vehicle interoperability goals (See VICTORY sidebar below). If the BRASS techniques prove to be adaptable and sustainable to match the comprehensive goals of flight test programs, their applicability and effectiveness for commercial aerospace and the military will be significant and lasting.

The DARPA BRASS project builds on iNET’s interoperability solutions using algorithms that allow test engineers to use complex computational techniques to solve a range of difficult problems in real time.

Broken hardware is a common problem that affects flight test scheduling. For instance, if a data acquisition unit (DAU) needs to be replaced but inventory stock is low, installing it could deprive concurrent programs. Ordering a new DAU from the vendor adds cost and delays. However, another type of DAU, even from a different vendor, might meet requirements and be available immediately.

Vehicular Integration for C4ISR/EW Interoperability (VICTORY) standard specifications provide a foundation for interoperability among onboard sensors and weapon systems, enabling a level of situational awareness not previously possible and resulting in increased soldier survivability and effectiveness.

Using requirements analysis techniques, the BRASS-powered system can track inventory of old or unused instruments, determining that a secondary DAU will satisfy the original requirements, saving money and time for the original test while avoiding putting other tests at risk. And these BRASS adaptations will typically explore beyond what an engineer would consider because a solution does not have to seem likely for BRASS to explore the possibility. These types of exploratory optimizations and adaptations are generally done by humans with significant domain experience, who use “intuition” as guidance. A BRASS-powered system can explore further and faster, looking for a more “objective” satisfaction of the requirements.

Another advantage of future BRASS-powered systems is the possibility for real-time adaptations. A BRASS-based system could consider the environment of the whole test range and decide to adapt a single test to avoid impacts to concurrent tests, or trigger adaptations to maximize the value or minimize the cost of the entire test range under its control. 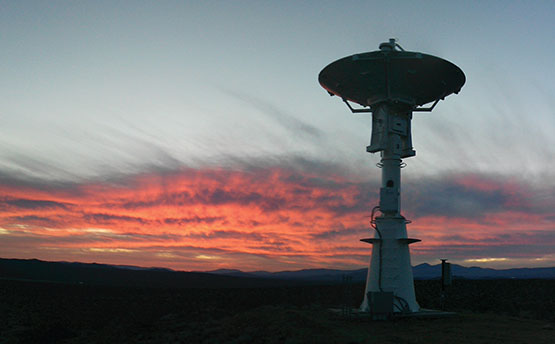 SwRI has developed a new network-based telemetry system to expand and enhance flight test capabilities for the Department of Defense’s iNET program. 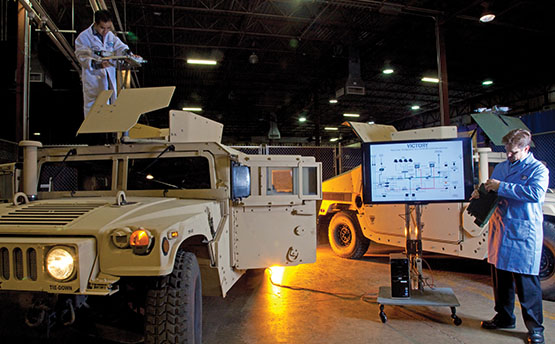 The SwRI-led VICTORY architecture and open standards have revolutionized and streamlined how the military adds critical systems to its tactical vehicles.

In the BRASS realm, several classes of problems can be solved or addressed adaptively. For instance, to assemble a flight test data acquisition system, an engineer needs to know what measurements and data rates are needed. A future BRASS-powered system would have these parameters built into the program, limiting the number of options available. For example, engineers typically assemble a system and validate its capabilities, including system redundancies to ensure access to safety-critical information. A BRASS-powered system can assemble configuration possibilities, based on available equipment, while minimizing hardware requirements.

Consider the scenario for a test article undergoing flight testing when a test scheduled to run in parallel has been grounded. A grounded test means significantly more bandwidth is available for data download. An iNET telemetry network system could grant access to the additional bandwidth to other tests. Without iNET, the guidelines for adapting to a beneficial situation do not exist, so a traditional system would move forward as if no change had occurred, missing the cost and value advantage associated with the grounded test. A BRASS-powered system would have access to all the relevant parameters, allowing it to take advantage of the situation. The system could recommend anything from simply transmitting more data for the existing test, to suspending it to do a more “lucrative” test, and thereby maximizing overall value. Making these types of complex adaptations lies in the future, but the technology’s potential is significant.

The U.S. military faces many challenges in making hardware and software interoperable and long-lasting in aircraft and ground vehicles. SwRI’s DARPA contract will create opportunities to connect interoperability initiatives across the DOD to improve efficiency and adoption of new technologies for decades to come.

DARPA’s BRASS program is designed to make software last a century through standardization and adaptation to changes in technology. The Army is addressing interoperability concerns in ground vehicles through the VICTORY program.

The Army created the VICTORY initiative to help correct problems created by the “bolt on” approach for integrating Army ground vehicle electronics. VICTORY is necessary to minimize the amount of redundant hardware associated with current capabilities and to reduce the cycle time and cost necessary to develop, integrate, test, maintain and upgrade vehicles throughout their lifecycles.

Ignoring some of the practical limitations of letting a computer create and modify test plans, the sky is literally the limit for how these systems adapt. Consider the earlier example of the icing flight test delayed by weather conditions. Armed with information about instrumentation, equipment and tests for unrelated tasks, a BRASS system could recommend reconfigurations to perform other tests. Going further, a BRASS system could plan for that possibility, evaluating other testing scenarios or monitoring the weather en route, allowing a cost-effective transition to alternative tasks if test parameters are not met.

Consider that NASA uses computer-designed antennas to maximize radiation patterns in ways humans would not have envisioned. Similarly, a BRASS system could recommend exotic test shapes and plans that end up saving tens of thousands of dollars and weeks of testing. The system could improve designs even as standards and test platforms evolve over time.

While these advanced applications are still years away, using our modeling techniques brings groundbreaking adaptive technology and expertise to this domain today. The scenarios discussed provide reasonable opportunities for BRASS adaptive technologies to prove their worth, not only solving the problem but also building credibility for the technology. Combining all the techniques into the model will dramatically increase the quality and capabilities of adaptive systems for flight tests and beyond.