Selective catalytic reduction (SCR) aftertreatment systems require the metering and dosing of a 32.5 weight percent urea-water solution (UWS) upstream of the SCR catalyst for abatement of nitrogen oxides (collectively denoted NOX). Urea undergoes a two-step decomposition process consisting of urea thermolysis followed by hydrolysis of isocyanic acid (HNCO). From this, complete decomposition of urea yields two equivalents of NH3 and one equivalent of CO2. The NH3 is the actual reductant used in the DeNOX process. HNCO is a relatively unstable intermediate that has a propensity to react with molecules other than water. These side reactions are highly undesirable and result in deposit formation within the aftertreatment system. Deposit forming reactions are particularly prominent at temperatures below 215° C. Because the exhaust gas must achieve a set temperature before UWS injection, low-temperature NOX reduction is often determined by the specified injection temperature, not inherent catalyst activity. As exhaust gas temperatures continue to decline with increases in engine efficiency, reducing both cold-start and low-temperature emissions will become paramount. The objective of this research was to significantly reduce or eliminate low-temperature deposit formation by integrating an HNCO hydrolysis catalyst directly into the injected UWS. Using this method, the catalyst and reactants will be intimately mixed, thereby providing maximum possible contact between species. 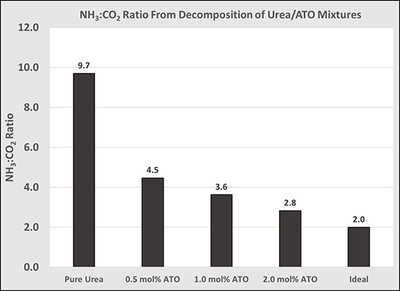 Figure 2: Effect of ATO concentration in urea on the NH3:CO2 ratio deposit testing using the ECTO-Lab revealed a 65 percent decrease in deposit formation at 200° C. Deposit reduction could be further improved to 88 percent by adding an appropriate surfactant to the UWS. It is believed these two components have separate modes of action for deposit reduction. The surfactant reduces the energy required to evaporate water and ATO catalyzes hydrolysis of HNCO. This technology has demonstrated significant promise for reducing deposit formation resulting from low-temperature dosing of UWS.

Titanium dioxide (TiO2) has been demonstrated to display high activity towards hydrolysis of HNCO. However, TiO2 is insoluble in UWS and is, therefore, not an ideal candidate as a material to be combined with UWS. An alternative solution was adopted involving dissolution of a titanium-containing coordination complex in the UWS, where the titanium is in a similar chemical environment and oxidation state as TiO2. Ammonium titanyl oxalate was identified as a source of Ti4+ that met all requirements. The connectivity of atoms in this complex is shown in Figure 1, with countercations omitted. 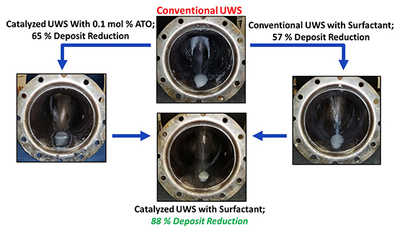 The extent of HNCO hydrolysis from urea decomposition can be evaluated numerically by the resulting NH3:CO2 ratio. The ideal ratio is two, and values larger than this indicate inefficient HNCO hydrolysis. Figure 2 displays the effect of ATO concentration in urea by analysis of the NH3:CO2 ratio. Decomposition of pure urea produced a ratio of 9.7, but was systematically reduced to 2.8 by sequential addition of ATO. This indicates that ATO is highly active toward hydrolysis of HNCO. Data are provided in Figure 2.