The encapsulation of cells (mammal cells, bacteria, viruses, eggs, oocysts, etc.) within synthetic permeable capsule walls may have the benefits of improved viability and stability due to isolation from environment such as extreme pH (e.g., stomach pH = 2) and temperature, shear stress, humidity, and immune isolation. Currently, cell encapsulation at SwRI is solely focused on microencapsulation techniques, namely, multiple cells are encapsulated inside capsules of micrometer thickness or higher. The key limitation of the microencapsulation of cells is the large capsule size, which cannot be delivered in a targeted manner other than by local injection or implantation. Many diseases or traumas require the targeted delivery of cells in a spatial and temporal manner. The objective of this project is to develop new and improved cell encapsulation techniques at SwRI directed towards broader biomedical applications. The encapsulation of cells within capsule walls of nano-sized thickness, along with new material formulations, will be developed in this project.

Human adipose-derived stem cells (ADSCs) were encapsulated within walls of a nano-thickness layer (<100 nm) chosen from a wide range of biocompatible and/or biodegradable materials such as chitosan, alginate, polylysine, collagen, etc. The viability and basic functions of cells such as osteogenic and adipogenic differentiation were confirmed after our optimized nanoencapsulation process. Finally, nanoencapsulated cells were successfully incorporated into a collagen matrix using an electrochemical process. Viability (determined by trypan blue and cell counting) of non-encapsulated cells and encapsulated cells were determined after an electrochemical process. This provides an example of cell-incorporated biomaterials for tissue engineering and regeneration applications. 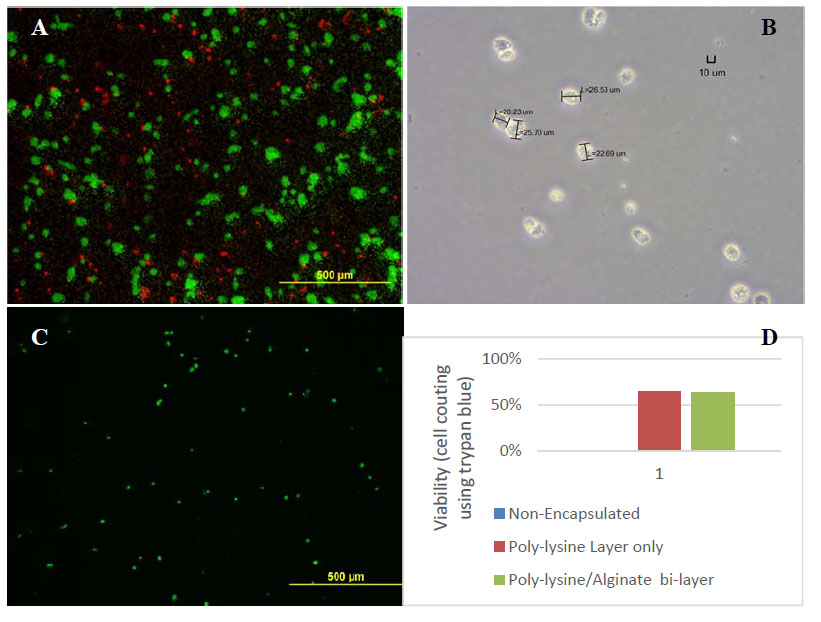