The DEVCon algorithm was implemented on a chassis dyno and tested on a 2017 Toyota Prius. The algorithm combined (a) feedforward (FF) based on recorded human-driver inputs to both pedals with (b) proportional-integral-differential (PID) feedback based on the corresponding human-driven vehicle speed. A three-pole relay was inserted between the three sensors mounted on the pedals (accelerator-position sensor, brake-position sensor, and brake switch) and the vehicle’s wiring harness. The relay was switched to change between recording mode, where the human drove the vehicle, and playback mode, where DEVcon provided both pedal inputs electronically.

An experienced human driver drove the vehicle over the US06 test cycle five times. One of these runs was used as the FF source for DEVCon, which also operated the vehicle over five iterations. As Figure 1 (which shows only 65 seconds of the test cycle) demonstrates, DEVCon closely followed the speed, accelerator-pedal position (APP), and brake-pedal position (BPP) of the human FF source. Additionally, DEVCon’s speed, APP, and BPP were more repeatable than the human driver’s by factors of 2.59, 4.59, and 1.94, respectively. Separately, the human driver braked the vehicle from approximately 117 kph to a stop, with a 30-second steady-state cruise in the middle. The driver drove one trace each with gentle braking, medium braking, and aggressive braking. DEVCon drove each trace five times, using the appropriate human-driven trace as the FF source; all 15 traces are shown in Figure 2. The mean energy recovered by regenerative braking (from 110 to 62 kph and from 58 to 0 kph) was computed for each set of five runs. The results (502, 442, and 389 kJ for gentle, medium, and aggressive braking, respectively) show that DEVCon can control braking with both the accuracy and the precision sufficient to resolve the difference in regeneration efficiency associated with three different braking strategies. 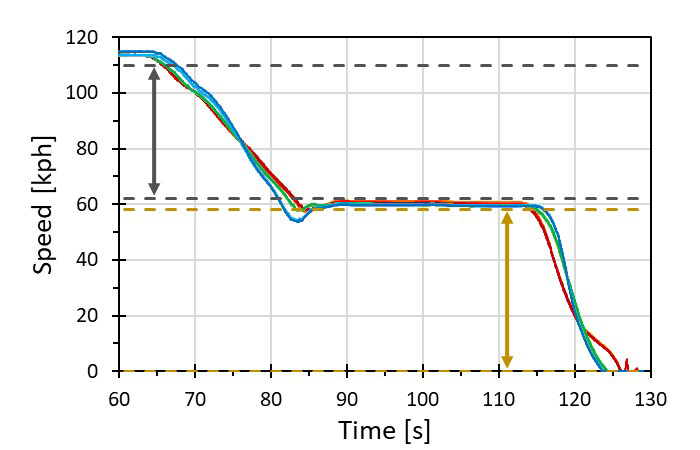