A key target area for NIH, NSF, and DOD medical program funding is localized delivery of immunotherapeutic treatments via controlled release. This is important since the therapeutic dose of such treatments are one or two orders of magnitude lower than a typical drug and thus can be toxic to patients if dosed at too high a rate. This fits with the concept of personalized medicine, e.g., customized dose quantity and release profile, to include potential chronotherapy (pulsatile release).

The objective of this project was to develop Multistage Polymer Delivery System (MPDS) implant technology that can be administered using a minimally invasive method, providing controlled release of minute amounts of drug over a period of weeks.

To develop the technology, the following objectives were identified in the proposal: 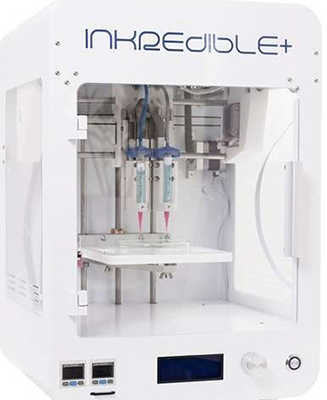 UTSA prepared 3D printed implant prototypes containing Rhodamine B via melt processing with the Cellink® Inkredible Plus system (Figure 1) out of PCL (poly-caprolactone) and PLGA 50:50 (poly lactic glycolic acid). They also molded prototypes from PCL and Rhodamine B. The release profiles of these prototypes were evaluated by both UTSA and SwRI, resulting in release profiles driven by a combination of diffusion and degradation of the bulk polymer. For comparative proof of concept of more tunable controlled release (more challenging in terms of 3D printing), SwRI fabricated composite implants via conventional machining, each with a reservoir containing a mixture of Ibuprofen and Pluronic F127, and elution channels with varying diameter and lengths to demonstrate controlled release via an erosion-diffusion mechanism.

Figure 2 presents the release profiles from the approaches used: A) 3D printed PCL, B) molded PCL (similar to 3D printed PCL) and PLGA, and C) SwRI-fabricated composite implants, which resulted in a constant release rate after the PF127 had eroded from the elution channel. Further development of 3D printing methods may allow a composite geometry to be fabricated and significant control via layering of the eroding material and customization of the elution channel geometry.