Energy recovery from low-grade heat sources (<100-300°C) is a challenging topic with potentially broad application to a wide variety of industrial, commercial, and residential processes. The primary challenge with low-grade heat recovery systems is the inherently low thermal conversion efficiency results in a prohibitively high cost of electricity. The objective of this work is to develop a natural-convection-driven system for low-cost power generation from low-grade heat sources using supercritical carbon dioxide (sCO2) as the working fluid. Significant cost savings and efficiency improvements can be realized by limiting the required hardware and incorporating a sealed power conversion concept. Utilizing a vertical process loop with heat addition near the bottom and heat rejection near the top will generate buoyant forces within the fluid, motivating mass flow with temperature difference as the only driver. Energy can then be extracted for Watt-scale to MWscale electric power generation, depending on the application. 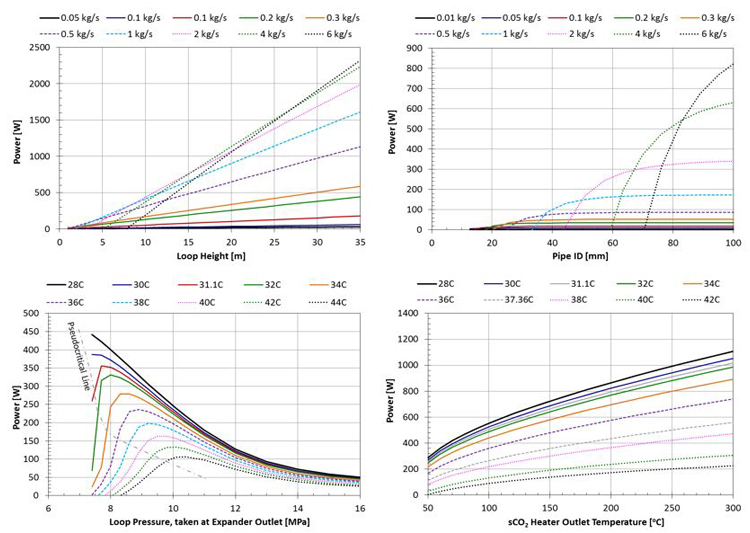 To better understand the capabilities and performance of a sCO2 natural convection cycle, a combination of cycle analysis and lab-scale testing were performed. Steady-state and transient cycle modeling were completed using NPSS. A lab-scale natural convection loop was constructed using 1” tubing and an elevation change of approximately 4.5 meters, utilizing hot- and cold-water baths for the heat source and sink.

Furthermore, potential heat sources and applications of various scales were identified and studied: geothermal, data center waste heat, industrial waste heat, mobile military compact application, and commercial/residential low-temperature application. For each application, the available heat load and size constraints were used to predict potential system performance as well as sizing for the natural convection loop. These cycle parameters were then used to size a turbine for energy extraction in each application. A conceptual design for the sealed power conversion concept was completed for a 4 MW-th data center application. 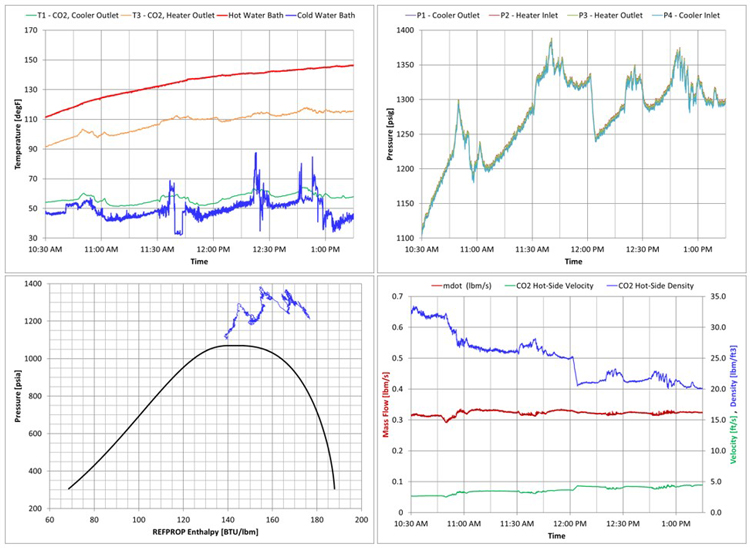 Based on cycle sensitivity studies, increasing the elevation change (pressure gain), increasing pipe size (decreasing pressure loss), and increasing temperature difference can significantly increase the recoverable energy in the system. Interestingly, it was found that decreasing the cold-side temperature improved performance significantly more than increasing hot-side temperature by the same temperature delta. Turbine sizing was completed for six cycles with thermal scales ranging from 100 kW-th to 80 MW-th. For the medium to large-scale applications, it was found that a traditional radial turbine can operate with reasonable efficiencies (up to 80%). However, turbine efficiencies are predicted to suffer at the smaller-scale applications as the available head and mass flow are significantly reduced.

Lab-scale sCO2 natural convection data was collected to validate the cycle concept. It was found that stable startup and flow directional control could be achieved using only one check valve upstream of the heater. The cycle was able to start-up and achieve steady mass flow rates within approximately five minutes after the sCO2 loop was pressurized. It was found that the sCO2 pressure and temperatures are very sensitive to changes in the source and sink temperatures, but mass flow remained relatively steady. During testing, the ice bath cooled the CO2 temperature to below the critical temperature, meaning phase change was occurring through the cooler. No adverse effects were seen due to the phase change; steady mass flow rates were maintained as the cold-side temperature varied above and below the critical point. During coast-down (allowing source and sink temperatures to converge), the loop was able to maintain measurable mass flow with a CO2 temperature difference as low as 2˚F (measuring 0.06 lbm/s with a corresponding CO2 fluid velocity of 0.82 ft/s). The steady-state NPSS cycle model was able to predict the lab-scale loop pressures within 0.1%, temperatures within 10%, and mass flow within 6%. The error in the cycle predictions is due to inconsistencies between the modeled heat exchangers and the actual heat exchangers; limitations include uncertainty in the CO2 flow distribution between tubes as well as uncertainty in the flow and temperature distribution of the water over the tubes. As expected, the CO2 fluid properties and cycle performance are very sensitive to the heat exchanger performance.

The estimated capital cost of a natural convection cycle was investigated for various thermal scales. For six applications, the source/sink temperatures, CO2 pressure, pipe size, and loop height were varied to quantify the impact on specific cost per available power. It was found that small-scale loops can be constructed for very low capital cost, but the cost per power is high due to the limited recoverable power. For small-scale (kW-thermal), medium-scale (1-10 MW-th), and large-scale applications (>>10 MW-th), the predicted specific cost per power values are approximately $750/W, $50/W, and $2.5/W, respectively. 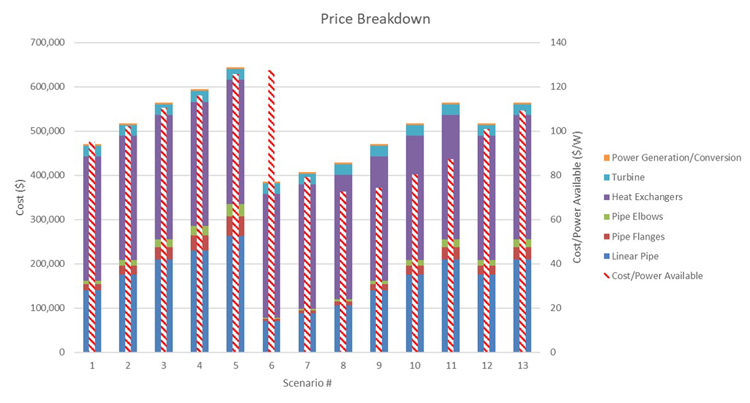