Robot dress packs, composed of the cables and hoses for a robot’s end effector, create many challenges to robot motion that are difficult to predict and overcome. Traditional dress pack management solutions impart high tension loads and fail to adapt to the complex geometry of robot motion. This project developed a system that enables a robot to exercise its full range of motion while not imparting performance-limiting tension and managing dress pack slack to operate freely from workpieces.

A prototype test cell was created, which combined challenging elements from prior projects. These included a UR5 collaborative robot with an eccentric wrist design, an end effector that positioned the dress pack at a difficult angle, and a confined duct for the robot to traverse. The ADDRESS system is composed of a powered feed system for controlling dress pack slack and pressure sensitive trip switches integrated within the dress pack. Controlling torque in the feed system’s electric motor allows dress pack slack to be managed at very low levels of tension. The trip switches serve as an additional safety and cause the feeds system to pay out slack if the dress pack begins to wrap tightly around the robot.

ADDRESS significantly increased the robot’s freedom of motion compared to existing dress pack management systems. The system imparted a lower tension load on the robot compared to traditional spring tension methods. The simple open loop control of tension used in ADDRESS operates independently without the need for integration with a robot motion program. As a result, the system can be integrated into a robotic work cell in the same way as a passive spring powered dress pack management system. 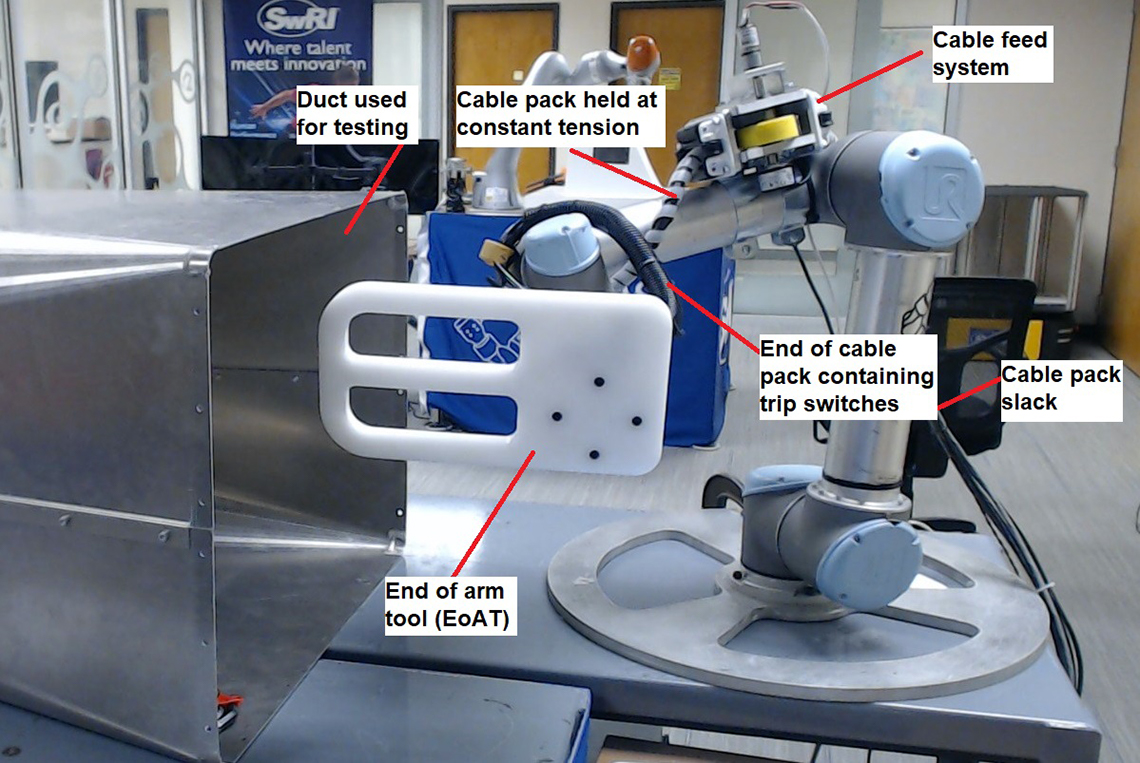 The ADDRESS system will be immediately useful on a wide range of projects conducted by SwRI. An ongoing project in the aerospace industry has encountered dress pack limitations and our goal is to explore incorporating ADDRESS as a system enhancement. In addition, the research team intends to license the ADDRESS technology to cable management companies.