Over the past two decades, composites have increasingly displaced aluminum as the structural material of choice in the aerospace industry. Although the exceptional strength-to-weight characteristics of composites make them ideal for aerospace components, manufacturing and material handling challenges can make implementation of such materials difficult. In particular, manufacturing parts using prepreg composite layup requires significant amounts of manual layup which increases costs, especially on complex components such as engine cowlings and control surfaces. Automating prepreg layup can help reduce repetitive strain in human workers, lower production costs, and generate more consistent parts. 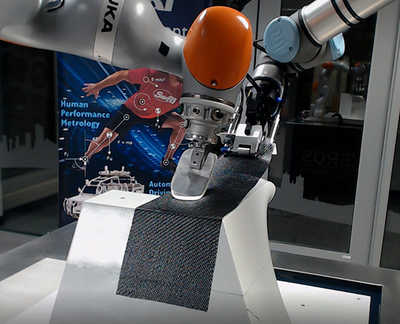 Figure 1: Robotic work-cell with consolidation tool in the foreground and gripper tool in the background.

With limited prior work in robotic prepreg layup, the research team had to develop both hardware and software to complete the project. The developed hardware and software were tested using two collaborative robots and a custom designed mold. Prepreg material was laid up on the mold, which consisted of many common geometric features found in aerospace parts. Trajectories for the two robots were developed using various ROS (Robot Operating System) frameworks. The last aspect of the project was a vision-based quality control system to detect fiber angle and wrinkles.

The research team developed two robot end-of-arm tools for manipulating prepreg material. The first tool, a gripper, consisted of two fingers, each with a roller that could have its resistance to rolling adjusted depending on the operation being performed. The second tool, a consolidation tool, was used to press the prepreg to the mold. Together, these tools allowed for the prepreg sheets to be contoured to 3D molds.

Software was developed to control the robots, utilizing a combination of manually programmed waypoints and automatically generated trajectories from 3D data. These waypoints and trajectories were specific to a single geometric feature. These geometric feature-specific robot motions were compiled into a layup sequence for an entire composite part. During the execution of the project, robot motions for only a limited set of geometric features were generated, with further development expected in follow-on project work.

Lastly, early prototyping resulted in the creation of a vision-based quality control system. Various lighting and image capture techniques were tested, with UV illumination providing the most promising results. Captured images were able to be processed and, by computing an FFT (Fast Fourier Transform), the angle of the fibers within the prepreg fabric was calculated with a resolution of one-degree.